This was a film I could not get enough of as a teenager. (And why is it always Ohio the would be New Yorkers are coming from?) The original source was the stories of Ruth McKenney based on her own move to New York with her sister. Then came a Broadway musical written by Joseph Fields and Jerome Chodrov. Then came the movie written by Blake Edwards and Rich Quine and directed by Quine. And finally a brief TV series.

I never got to escape to New York, but the dream was passed on.

Anyway. Betty Garrett and Janet Leigh play two sisters (a writer and an actress) trying to make it in New York. The wonderful Bob Fosse and Tommy Rall dance their way through the film.Jack Lemmon gets top billing, but somehow it is the singing and dancing you remember most. It is too bad that Betty Garrett is remembered mostly for some later ho-hum TV work on ALL IN THE FAMILY and LAVERNE AND SHIRLEY and not for the Broadway star that she was earlier. 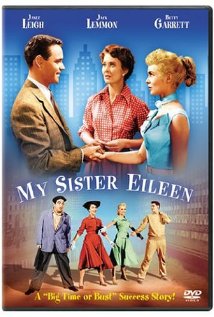 Patti - You ask an interesting question about Ohio. Maybe it's because rural Ohio is so, so different from New York. Anyway...this is a film I hadn't seen before. Maybe I should try to find it.

It's never too late, Patti!

I think it is sadly. You need a kind of street smarts and energy to take advantage of Manhattan that I don't have now. Or a lot of money.

I've never seen this but I do have a sister named Eileen.

Oh, Manhattan. Yeah, that is only for the rich. But there are places in Brooklyn that are more affordable and only a short bus or subway ride from Midtown.

A bus might make more sense as we age actually. No steps to climb.

There's a 1942 version with Rosalind Russell and Janet Blair which features the most romanticized MGM-ized vision of New York City ever.

Also, Betty Garrett was married to Larry Parks, one if the first victims of the Blacklist. She wrote an interesting autobiography in the 1990s. I think they lived in Europe for a while, which may be why she didn't appear in too many movies.

I thought I KNEW musicals (I majored in Theatre, after all), but I don't know this one. I'm shocked!

I saw this years ago and loved it though I have trouble remembering any specifics. But I have not seen it since because I found out that in real life the sister Eileen drowned while still a young woman. At least that's how I remember it the sad story.