Forgotten Movies: THE FALCON AND THE SNOWMAN

This is the theme music by Pat Metheny. 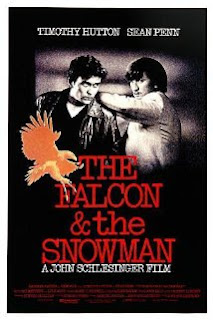 I am not sure how this would hold up--or even if it was ever a good film. But Sean Penn and Timothy Hutton were both hot properties then, so the film got a lot of attention. Especially since they played somewhat murky figures.John Schlesinger directed this movie, based on a true story in 1985.

Two guys, one a disgruntled federal employee and one a druggie, childhood friends, are recruited by the Soviet Union. It seemed properly moody and cynical then but perhaps I was under the influence of their star power.

Thanks Patti - I remember the music well but would love to see this again - seems more pertinent than ever frankly along with Hutton's appearance in the film of Doctorow's DANIEL ...

I haven't seen The Falcon and The Snowman in years. I remember liking it though...

I'm not sure I remember much about it other than the title. Couldn't have told you who was in it for example.

Patti - I actually thought this was a pretty good performance by Sean Penn. Nowhere anywhere close to his work in Milk, but decent work.

Good choice, Patti. I liked this film at the time. Methany and Bowie were a good choice for the soundtrack. The line I never forget is: "This is not America."

I only remember the cover of the paperback. It had ahand painted like an American flag slipping some missiles to a hand painted with the soviet flag. Wow, soviet doesn't capitalize itself on autocorrect. Inks time word I guess

I remember seeing the book quite a lot at the used bookstore. It was ubiquitous for awhile.