HOW I CAME TO WRITE THIS BOOK: Ed Gorman 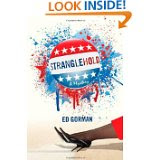 We hang the petty thieves and appoint the great ones to public office. ~Aesop

"HOW I CAME TO WRITE: STRANGLEHOLD" by Ed Gorman
I'm a political junkie. In my Thirties and Forties I voted both Dem and GOP. I also wrote speeches for both Dems and GOPers. I went on the road with one campaign to film TV commercials. I sat in focus groups when candidates were discussed candidly by average folks. And I was present in a TV studio when a major GOP candidate for Governor went against the advice of his ops and ended his career on live television. He was a foolish, vain, desperate man.
I've worked all these experiences and many more into my three novels about political consultant and op Dev Conrad. Sleeping Dogs was the first, Stranglehold the second and Blindside, which I'm just now finishing, the third. They are of a piece because each deals with the American political system, which is probably dirtier now than at any time since the Gilded Age when Congress was owned and controlled by robber barons. And it is dirty in both parties.
In Stranglehold, as with the other two Dev Conrad books, I attempt to show that there are very few heroes on either side of the aisle. What we tend to forget is the primary rule followed by virtually every person ever elected to congress--get yourself re-elected. Every other consideration is secondary. And again, this applies to both sides. As Bob Dylan once wrote, "Money doesn't talk, it swears." And money is just about all that matters in politics. The Tea Baggers, ironically, have brought in a group of windbags who'll just make it worse. One of these new people has even hired a former K Streeter as his chief of staff.
On the other hand, the Dems are almost as corrupt. In Stranglehold I show a minor political dynasty trying to hold on to its power. We think of the Kennedys and the Bushes when we say dynasties but there are several others across the States. Generations of pols from the same blood line. The scion of my family is dead. He was once a fierce champion for the working class but by the time he died he had become accustomed to the panache and perks of Beltway life. He became a rich man himself and ridiculed his old beliefs.
Back to "almost." While the reviews have been good for both Sleeping Dogs and Stranglehold, every once in awhile a critic will wonder if I'm not being too cynical about our political process. I have to say I think that's impossible. We can never be cynical enough. The Wall Street Journal's Tom Nolan, in the course of a very positive review of Stranglehold, noted:
The author uses an observation by Thomas Jefferson as the novel's headnote: "Whenever a man has cast a longing eye on offices, a rottenness begins in his conduct." The most frightening revelations in "Stranglehold" may be the unseemly truths it seems to tell about the status quo of our electoral process.

Ed Gorman is the author of Sleeping Dogs, the first book in the Dev Conrad series, A Ticket to Ride, a Sam McCain mystery and many other books in the fields of crime fiction, westerns and short stories. He is also the editor of a yearly anthology that collects some of the best of crime fiction stories.You can find him here.

Ed - I'm impressed with the way you tap your own interests and passions as you write. That interest not only makes a story more interesting to readers, but it also makes the story more accurate. Writers who are really interested in the topic "do their homework" on it.

STRANGLEHOLD is a must buy. One of the best reads of 2010.

This is a splendid discourse on the genesis of an idea that becomes a novel. Life experience becomes a story. I enjoyed this, and wish Ed every success.

Very few heroes on either side. There's a clear statement of truth.

Great post, Ed and Patti. "Stranglehold" is one of my favorite books of 2010, and one of Ed's best. The political game is so over the top these days, and Ed seems to have a rare clear head and sound judgment.

Stranglehold is a wonderful read and Ed truly is fair when it comes to the politics in his books. Passionate people can, in fact, be fair and Ed proves this. He also does so in his Sam McCain series (which I love because it's a wonderful trip back into the 60's).

And the masterful writing is what masters get to do.

There is nothing that gives you greater insight than thinking everyone is a crook. And I do.

Or, at least, realizing that the nature of the work is at least as corrupt as every other sort of human endeavor.

Another way your career has followed Robert Bloch's, the political advisory/campaign work, Ed!

Almost glad Ed's not here now to see the truths he depicted nine years ago choking the life out of this country. Have to wonder if George Clooney wasn't influenced by Stranglehold when he co-wrote the screenplay for The Ides of March.