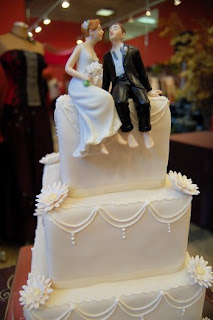 BIO: Jan Christensen has had over fifty short stories published in various places over the last dozen years. She mainly enjoys reading and writing mysteries, but every once in awhile steps out of that comfort zone and goes for something else. When not writing and reading, she travels around in a motorhome with her husband, seeing the USA.

SMOOSH
By
Jan Christensen
Crystal was pretty sure the marriage wouldn't go well when
Roger mashed the slice of wedding cake into her face and ground it all over, even covering her eyes.
She'd known several weeks ago that marrying Roger was a bad idea, but she didn't know how to call it off. Her mother had planned this event for almost a year. She'd spent tens of thousands of dollars to make this a perfect day for Crystal.
And here she was, despair filling her heart instead of joy. She wiped the cake from her face and tried to smile at her groom. He wore a self-satisfied smirk, and all his friends were laughing, except Brad. Crystal looked at her mother, but Ingrid wouldn't meet her eyes.
It was her turn to feed the groom a piece of cake. Should she rise above his crudeness or do what she really felt like doing--smash it into his face and grind it into his eyes and ears, all over his head? His buddies would howl with laughter. Except for Brad.
She'd only realized a week ago how kind Brad was, how different from the rest of Roger's friends. She'd figured out the only reason Brad stuck around was a feeling of loyalty to Roger--they'd been friends since kindergarten.
But they were so different now. Roger was flamboyant, loud, with a cutting sense of humor. His exuberance was what had attracted her, she who generally felt mouse-like. Brad was quiet, almost somber, and his humor was self-deprecating, never unkind.
Crystal picked up a piece of cake, and pretended to weigh it in her hand. Roger's friends began to clap and chant, "Feed it to him! Feed it to him!"
Roger was smiling, but with a wary look in his eye.
Crystal glanced at Brad, and then she gently guided the piece of cake to Roger's mouth and let him take a bite. He had the grace to look abashed. His friends stopped laughing. Roger licked his lips with an exaggerated swipe and laughed softly. Then he took Crystal's hand and guided it to his face, slamming the cake into himself, roaring.
The room erupted into screams and laughter. Roger wiped his face, staring at Crystal. She shivered, cold all over. Somehow she knew that when they were alone, Roger would get back at her. He'd saved himself, but she'd pay.
Roger never hit her, never did anything outwardly aggressive again, but the two years their marriage lasted was an agony of psychological abuse. Looking back, Crystal could see all the signs she'd missed until the few weeks before the ceremony.
The divorce was messy and painful, and she got out with little
money, and even less self-esteem.Three months after the divorce became final, Brad called.
"How are you?" he asked.
She knew he really wanted to know. "I'm all right. Or I'll be
all right. Given time." She hoped that was true.
"I thought you might enjoy a show. I happen to have here two
tickets to 'Oklahoma,'showing at your local, neighborhood theatre,
spelled with an 're.'"
"Ah, I know that place! Haven't been there in years."
Left unsaid was that Roger didn't really like that type of
entertainment. As soon as the honeymoon was over, they never went to
another play.
When Brad picked her up, he said, "I want to take you on a
little detour before we go to the show."
Crystal was intrigued. "Sure."
He surprised her even further when he said, "You drive."
They took some back roads and were out in the country in less
than fifteen minutes. Brad had her make several turns, and soon they
were climbing a hill on a road marked, "Private."
"What is this place? I've never been here."
Brad smiled. "I bought it a few months ago--plan to tear down
the old barn, the only thing left standing, and build a house."
As they rounded a corner, Crystal slammed on the brakes and
squinted at something in the road. "What is that? Is that what I
think it is?"
"Probably," Brad said. "Want to go take a closer look? Then
you can run it over. After you do, I bet you'll be finished with
Roger for good."
They stepped out of the car and walked to the three-tiered
classical wedding cake, Crystal laughing all the way. It had only a
lone groom on top. When they reached the cake, she turned to Brad
and threw her arms around him, squeezing him tight.
"Let's go!" she said, and ran back to the car. "Buckle
up--this is going to be quite a ride."
She lined up the car so that the left wheel would go over the
cake, then she hit the gas.
"Whoopee," she shouted as white frosting flew up and hit the
windshield. "Brad, You sure know how to show a gal a good time!"
THE END
Posted by pattinase (abbott) at 10:00 AM

Nice one, Jan!! And going through with a wedding you'd rather back out of happens way too often and never with good results.

Can you imagine how good that would feel? Wow!

Very nice indeed. A touch of the Robert Altman about it.

Thanks for commenting, all of you--it's so nice to get feedback, something that seems to rarely happen with short stories.

Thanks, all. It's so nice to receive comments for a short story--something we rarely see. I appreciate your taking the time!

Could you please introduce me to Brad? He sounds perfect!! LOL Another great short story from THE Jan Christensen.

I am so proud of your and your writing. Write--right--on! You did good on this one. Kept me going. Nice, tight, drama building, the whole mahgilicudy (have to look up the spelling on that one).

Kerrie told me about your flash stories, thinking I might be interested in joining. I am not quite sure I have understood exactly how and what (I am just a stupid Dane), or how often ... if you understand :D

Hi Dorte-I've been posting a challenge about every three months. The next one will be in September.
Now if you'd like to write about a forgotten book, I do those every Friday. YOu can email me at aa2579@wayne.edu if you're interested.

Thanks again to Pat and "Southern Girl" for nice comments. Makes me want to write and submit more, for sure! And Dorte, hope to see a story of yours on-line soon!

Thank you, Jan. I will certainly think about it, but writing 1000 words in English would take some time for me.
I joined a writing course recently where we hand in ultra-short assignments every week (3-400 words). I have translated some of these for my English blog, but even these short ones take a long time, and I never really feel my English version is as convincing as I want it to. Blogging in English doesn´t bother me, but writing fiction is surprisingly difficult for me.

Love it! I can almost taste the icing! Great story.

Thanks, Lonnie. Dorte, all I can suggest is to keep trying, and read lots of books/stories written in English. You're looking good when you post here! Good luck.

Jan, I do read quite a lot in English. I am an English teacher ;)
It is WRITING fiction in English that bothers me. But as most professional authors have professional translators rather than write in more than one language, I can live with writing less than perfectly in my second language.