Diane's Killian's SONNET OF THE SPHINX, the third book in the Poetic Death series from Pocket Books, is now available

The girl with the 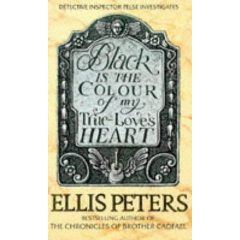 guitar-case was standing alone at the Belwardine bus stop when Arundale parked the car before the station entrance, and went in to collect the records Professor Penrose had left behind.

Black as the Colour of My True Love’s Heart, Ellis Peters

Not everyone sees folk music as sexy and dangerous. But when I’m not writing mysteries I supplement my starving artist income by singing Celtic music, and let me tell you that it is not all “Scotland the Brave.” One of my all time favourite mystery novels combines music and murder. It’s Black as the Colour of My True Love’s Heart by Ellis Peters.

I first discovered this novel in our little local library, and I searched for a copy of my own for years (back in the day before ABE Books made book hunting a non-challenge). Just seeing it on my bookshelf gives me pleasure -- and every so often I read it again. The writing is classic British crime mystery, crisp and clever with that dry humour one expects. The plot is smart but it’s the characters that I still remember. It’s a series book featuring Peters’ beloved sleuthing Felse family, but the Felses take backseat to the romantic leads of this story: Liri Palmer and Lucien Galt.

Liri and Lucien, are two stars of the European folk music circuit appearing at an English folk music seminar at an isolated and creepy country house-- by the way, this takes place back in the 1960s when folk music had some serious street cred. They’ve been lovers off and on, but Liri suspects Lucien of being unfaithful, and she is not a girl to be trifled with. Lucien keeps swearing his devotion to Liri, but there are some mysterious gaps in his behaviour that he declines to explain. Before long murder takes centre stage at the festival.

What I adore here is how so many classic themes and motifs of folk music have been threaded through the contemporary plot: revenge, sacrifice, betrayal, loyalty…it’s skilfully handled in a plot that’s dramatic and surprisingly touching. If you love old fashioned British murder mysteries, Ellis Peters is singing your song.

Short stories by Anonymous-9 can be found online at the websites of Beat to a Pulp, ThugLit, Yellow Mama, Twist of Noir, Powder Burn Flash, and DZ Allen’s Muzzle Flash (defunct). A-9 is in self-imposed witness protection for good

reasons. Email: anonwrite9@gmail.com Serenade by James M. Cain
I’ve spoken about my all time favorite short story in the Comments section of some blogs, and also in my first and only interview for BlogSpot Central. I’ve alluded to why I like it, but never actually spelled it out.

Crime fiction by definition is politically incorrect. Crime writers go into the dark corners of human nature and shine a light on the horrible capabilities lurking there. None more so than James M. Cain, widely regarded as the father of hardboiled and author of, as Ross McDonald described it, “a pair of American Masterpieces.” He was referring to Cain’s “Double Indemnity” and “The Postman Always Rings twice,” two short stories made into Hollywood noir films. They are not my favorites, though, “Serenade” is, written in 1937.

I’ve searched the net for reviews of “Serenade” and no reviewer I could find comes close to nailing what the story is about. At first glance, it’s so politically incorrect that anybody standing up and cheering for it had better be wearing full body armor. It’s racist and homophobic. Or is it?

An opera singer finds himself down and out in Mexico after escaping his domineering male lover, also his impresario (or manager) as they called them back in the day. When the singer reclaims his heterosexuality with an earthy Mexican prostitute, and brings her back to America, he regains his ability to sing and soars to fame and fortune.

At this point, the verdict on the side of political correctness doesn’t look good. The unwritten conclusion a reader could jump to is that Cain was saying gay sex “castrates” a male artist. But there’s more to it than that. The gay manager is also highly manipulative and controlling. The opera singer was constricted in every aspect of his life by this man, and sex became a weapon to further dominate him. It’s the sex combined with his forced submission that proved so damaging. We more often see male/female stories that examine this dynamic. Cain gave it a rare twist.

“Serenade” sparked in me a complicated mental inquiry into male and female energy, attitudes, yin and yang, and how it all plays out beyond gender. I’m still learning from this story. The more I contemplate, the more it reveals.

Onto the charge of racism. As we know, the standards of Cain’s day were different. When the opera singer brings his new love to America, his superficial Hollywood friends slight her. Cain clearly shows this is wrong. Although the opera singer winces at her ethnic style of dress from time to time, he never makes her feel bad or openly criticizes her. When she is snubbed at a party, he chastises his friends and insists they leave.

Ultimately it is the Mexican woman who sees exactly what is going on between her man and the manager, and commits the crime to get rid of him for good. So although Cain does use verging-on-racist descriptives of the woman’s dress in the story, ultimately she emerges as the courageous heroine.

My favorite place to order Cain books is Barnes and Noble online, under the Used and Out of Print section. The prices are a fraction of what you pay new.

“Serenade” was also made into a movie in 1956, starring Mario Lanza, Joan Fontaine and Vincent Price.

Kathryn Magendie is a writer, editor, and co-managing editor of The Rose & Thorn Literary Ezine. 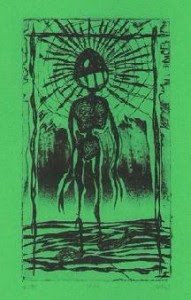 I was stunned by Howie Good’s collection of poetry entitled “Tomorrowland.” From the first poem Lullaby for the Nameless in which he lulls the reader into a feeling of nostalgic safety with an evening of children, grandfathers, and shop windows; only to lead them to the unexpected image of a firing squad listening to a ballgame on the radio. And thus opens Good’s poems that will keep readers off-balance, between the ugly and the beautiful, the good and bad, the dark and the light. He will take you to a quiet neighborhood and then guide you to its alley’s dark pathway where something horrid happened, where that alley remains as both reminder and testament to the heart of people and events.

In a contradictory Parable of Sunlight, on that “rare sunny day,” Good will point to you the “bodies in early states of decay [that] hang like gray rags from the trees,” and he will “wonder why and whether tomorrow is supposed to be just as nice as today.”

In paradoxical language and images, where one will feel as if between wake and restless sleep, Good is not afraid to slice open a scab and let ooze what lies beneath. How can one remain unscathed by language such as in Sleep Rituals, “…heating coils glow like the ribs of a starving dog, God rolls dice that have no spots, a mare with a burning mane screams in terror…”

There is a strangeling absurdity among the disheveled characters who walk that neighborhood with that strange alley—like the ticket taker who asks for identification and the poem’s narrator asks, “My dark laughter? The socket of my missing tooth?” I read Good’s poems more than once, more than twice, and then flipped through the book, looking for snippets for readers, but there are so many words into images that startle into intakes of breath that the entire book of poetry would be told if every “gem” were placed here in this review.

Reading Good’s collection will leave the reader, as I was, astonished, and at once both troubled and enriched. One may think from this review that Good’s poems are “depressing,” but the language is too beautiful to carry that term, for the use of image and character, plot and scenery—the stories Good tells—all make “Tomorrowland” a gorgeously startling read.

Howie Good is a journalism professor at the State University of New York at New Paltz, and is the author of six poetry chapbooks.

Great piece on Serenade. I read a very musty, dusty hardback copy from Hartlepool library over 20 years ago and it remains ... vivid.

The Ellis Peters book sounds interesting. I have always loved folk music from Joan Baez to the Clancy Brothers and Tommy Makem. This sounds like something I'd really enjoy. Thanks for reviewing it. And sorry, but I still love Scotland the Brave. ;)

I've been looking to pick up Serenade.

Earlier this week I read Village Voice columnist Gary Giddens' take on Serenade and other Cain books in the collection, Faces in the Crowd, which was published in 1992 and reissued by trade paper by Da Capo Press in 1996. It could turn up on the Net.

As usual, Cullen's site won't let me post, so I'll note that H. A. DeRosso is one of the towering figures at the intersection of the western and noirish crime fiction. Before the new generation including Ed Gorman, Bill Pronzini, Joe Lansdale and Loren Estleman, DeRosso was rivalled in this perhaps only by Steve Frazee, though (among others) Elmore Leonard and Walter van Tilburg Clark might have something to add to that conversation.

Isn't it funny, Kent, how with the Internet we all think about things together now.

I have only read one Ellis Peters book, Linda. Have to try another.

I liked the Cadfael series in the Ellis Peters books, didn't take much to the others that I read.

"But when I’m not writing mysteries I supplement my starving artist income by singing Celtic music..."

Why do I not find this surprising?

Seeing a bit of DOUBLE INDEMNITY on TCM last night reminded me of How Things Have Changed...in 1944, one presumably could order a beer at a drive-in restaurant. And, apparently, no food with that.