Whose First Book at an Early Age Sent You Reeling? 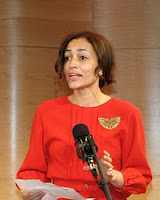 Zadie Smith wrote WHITE TEETH when she was like 22. It's not just that it was great, but that it was about old men in large part. How does a college girl have that sort of insight and such a sophisticated writing style? Are there prodigies in writing?

I know Updike did something similar at a young age (POORHOUSE FAIR), but jeez, WHITE TEETH just swallowed me whole because of its insights into ethnic characters in modern London. It was like Dickens on speed.

Whose first book knocked you out?

Patti - Your post made me think of Mary Shelley's Frankenstein which she wrote (or so I've heard) at 18. A classic novel written by someone that young!

Salman Rushdie was already a well-known writer when he wrote MIDNIGHT’S CHILDREN at 33 and it is, in my opinion, one of the grandest novels I have read till date. Its narrative power continues to hold me in awe. I’m not surprised it was voted the Booker of Bookers.

And on a dare, Margot.
I have a copy of that book, Prashant, sitting right here, but the print is too small. I must seek out another.

V. by Thomas Pynchon. Not only is it a very funny novel, V. became the subject of one of Bill Crider's papers (especially the part about alligators in the sewers) that lead to hundreds of items of alligator paraphernalia regularly arriving in Bill's mail box.

I thought about how I really liked BONJOUR TRISTESSE by Francoise Sagan but that didn't knock me out, I was most impressed by how simple it was. A really controlled little story.

I was probably 21 when I read The Basketball Diaries and everything about it impressed me. His digressions, his loose, cocky style, his rhythms. It was probably also a back door introduction to New York poetry.

MY BROTHER WAS AN ONLY CHILD by Jack Douglas warped me for life. Then I discovered Max Shulman.

Loved Max Schulman. Have never been able to read Pyncheon. Not ever the CRYING OF LOT 49. Bonjour was terrific.
I have read a little Delany but not sure if it was the early stuff.

Probably Cather in the Rye. There may have been something earlier that hasn 't yet popped to mind.

Fred Exley's A Fan's Notes. It was my pleasure years later to get drunk with him a number of times when I got to tell him how much his book meant to me.

I have read that book many times although not recently. It is one of those "special" books that never lets go of you.

Donald Burgett's memoir about the Normandy invasion, Currahee!. I bought the reprint, As Eagles Screamedwhen I was 12 or so and devoured it.

Before that book all my knowledge of World War II was the bloodless film and TV versions, or survey books from the library.

Further: Burgett was a lifelong Michiganer so you may have heard of him.

I just found an online trip diary by a guy who visited Burgett and shot his nickel-plated .45. I remember Burgett writing about that gun. http://www.ww2airborne.net/clancy/506_usa08visit_us.html

Burgett wrote three more books about the war. During the Battle of the Bulge Burgett and his unit had won a gunfight and a couple Germans were alive and wounded. Burgett casually pulled out his pistol to shoot one of the Germans. He stopped when a fellow soldier asked "What are you doing?" Probably the same pistol.

Loved A FAN'S NOTES too. And I've never been able to read Pynchon either. Jim Carroll is another good choice.

S. E. Hinton wrote THE OUTSIDERS in her teens. She started it in high school and was a college freshman when it came out. Joyce Maynard's LOOKING BACK was published before she was 20. It was the article leading to the book that got Salinger's attention.

And that is one creepy thing to think about.

Although I took courses on World War 1, World War 2, Nazi Germany and Vietnam, I have never been much of a war reader. Phil is though. I will mention these.

Harper Lee pops up, Flannery O'Connor's Wise Blood, Carson McCullers' The Heart is a Lonely Hunter and the "young" Wm S. Burroughs' book, Junkie. I still gleefully enjoy all of these.

If you're looking for a young writer who had insights beyond his or her years then I'll pick Richard Yates' Revolutionary Road published when he was 35.

If you're talking about a first time author who had a flair with words and was entertaining to boot I'll pick SETTING FREE THE BEARS by John Irving. He's since lost the "entertaining to boot" part. I also think Karen Russell's first book of short stories (ST LUCY'S HOME FOR GRILS RAISED BY WOLVES) is astounding in its originality and skill with language.

If it's just any old first time book I thought BOXER BEETLE by Ned Beauman was one of the most original AND entertaining AND insightful debut novels I've read in a very long time. (Yes, I know, I keep talking about this book repeatedly.)

I think Irving's first three books SETTING FREE, WATER METHOD MAN and I forget the third, were among his best. REVOLUTIONARY ROAD would make my top ten book list.
The other two I need to check out but my husband just read AGE OF MIRACLES.

THE 158-POUND MARRIAGE (which I have not read) is the third Irving.

That's it. What constitutes young? I should have specified.

But writing fiction, at least, tends to out the age of the writer...Hinton's works certainly read to me as the works of a teen. Jane Gaskell's as well.

Among first novels...Fritz Leiber's CONJURE WIFE and Robert Bloch's THE SCARF...but they weren't kids by then...

Forever Amber, by Kathleen Windsor, about 1948. I learned about sex, reading it by flashlight.

I remember reading that one too. It really was shocking at the time.