Todd Mason will serve as host for FFB for the next two weeks. The third week, the 12th will be Agatha Christie week.

Things are a bit rocky here this morning because of the new blogger dashboard. Sorry.

**Summary still to come. Too many problems to get it up. 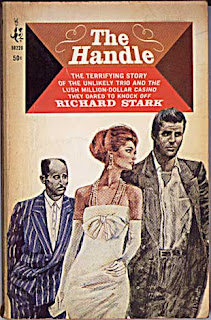 I  hope The Handle by Richard Stark was a pleasure for Donald Westlake to write because it sure is a pleasure to read.

Now while The Handle is every bit as tough as Dick Cheney's heart, the hardboiled aspect is played off against the sorriest group of human beings Parker may ever have had to work with. And the sardonic way Westlake portrays them had me laughing out loud at several points. 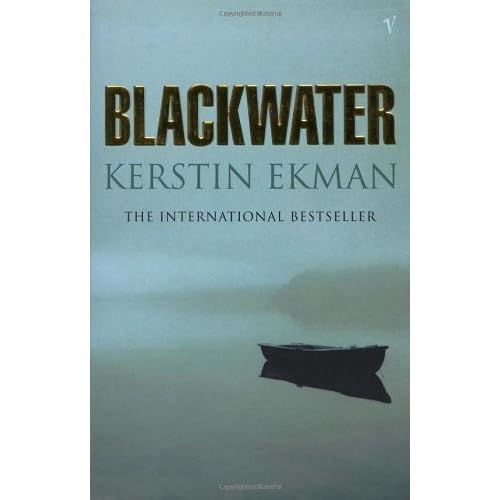 Long before the Scandinavian surge of crime fiction of today, a few Swedish writers caught our attention and one for us in the 1990s was Kerstin Ekman.

The plot centers on teacher and mother, Annie Raft, and is set in the 70s, and focuses on events surrounding, and following a double murder at the Blackwater lake in Sweden.

The victims of the murder are two tourists, visiting Northern Sweden to explore its forested wilderness. They are discovered by Annie Raft, herself new to the region, as she and her young daughter Mia scrabble through the forest, searching for the commune where her lover awaits and where they are to start anew away from the turmoil of their lives in Southern Sweden.

Things also deteriorate in the commune. Paradise is not what it seems, nor is Annie's lover. It is years later when this story concludes.

Ekman explores the degradation occurring to the environment at the same time she sets up this plot. The darkness of the land mirrors the darkness of the people who inhabit it. She also examines the animosity between Swedes and Laplanders in the region. From reviews on amazon, I see that this book was too dark for many readers, but we both enjoyed it at the time.

Hi Patti, great cluster as always, thanks for th einclusion. I think the link to FJ Norris is actually the same as James Reasoner's though. (I think John has a new FFB posted yet)

This new blogger is a bit clunky for me as yet.

Running late as usual, Patti. I had the quiz to finish. But I'll be up with something soon.

It's been a long time since I read THE HANDLE (RUN LETHAL in the British edition) - 1975 to be exact - and I don't remember it at all. Maybe it's time to reread the series.

As for the Scandinavians, I read the Sjowall/Wahloo Martin Beck series in the '70's as well.

Have a great trip, Patti. Hope there are no disasters this time!

I'm listening to a Swede author now, Jens Lapidus's EASY MONEY. I pretty much ignore all the Swedish personal and place names. Same with the names of several Serbian characters.

I really, really enjoyed the Sjowall/Wahloo books a few years ago.

I took Swedish during my college's J-term (one class during January) and received a D. I remember one word: hund.

There was a Danish crime writer named Poul Orum in the 1970s who wrote two very fine books. Of course I know them only in their English translations. Clean, stark, and humane stories with at least one of them having a very good detective story plot as well.

Why you all stick to Blogger is beyond me.

I would love to switch but six years worth of stuff could be lost if I didn't do it right. I need a techie to help me.

Love the Sjowall/Wahloo books. Yes, there were the first I read. Oh, and Nicholas Freeling from Amsterdam if that counts kinda.

Jeff-Disaster looms if American Airlines cancels our flight or if it is delayed more than thirty minutes.

Todd Mason said...
This comment has been removed by the author.
4:12 PM

Happily, the Blogspot revision is far less annoying than the Beta version of the revision was. There are pointless changes, but they did fix many of the aggressively stupid things they initially fiddled with. Or, at least, this is true for me so far. (Composing in either "compose" or "HTML" is useful, though it's certainly not intuitively so at first...)

Good luck. The problem we had with them most recently was when the price for one of our flights dropped. When Jackie called about getting credit (as we do from Jetblue or Southwest) they told her, tough luck. You paid, no refund, no credit, drop dead (basically).

I saw they had a 4 hour delay on a NY to DC flight on American Eagle because for some unstated reason (affair with the other's husband? I really wanted to know!) two flight attendants got into a fight onboard, refused to work together and they had to go back to the terminal and wait for another crew. Couldn't they just ignore each other? It's a one hour flight for crying out loud!

We're flying American Eagle to Cleveland so our fingers are crossed.

RE: "I saw they had a 4 hour delay on a NY to DC flight on American Eagle because for some unstated reason (affair with the other's husband? I really wanted to know!) two flight attendants got into a fight onboard, refused to work together and they had to go back to the terminal and wait for another crew. Couldn't they just ignore each other? It's a one hour flight for crying out loud!"

The most amusing blog comment I've seen in some time. You could sell that spec script to Hollywood.