HOW I CAME TO WRITE THIS STORY: Chad Eagleton 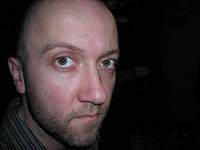 My writing process isn’t really that interesting, except for when I wrote "Six Bullets For John Carter."

I saw that Plots With Guns was taking submissions for a sci-fi issue—Plots With Ray Guns. Crime fiction was never my first love. I used to read a lot of horror, fantasy, and science fiction. I was excited about writing something different, something more like what I always thought I would write. I mean, writing crime fiction is sometimes a little surreal for me—kind of like waking up and discovering the cool, hot chick with the tattoos and the razor in her ass pocket hasn’t left when you thought for certain it’d only be a one-night stand before you headed back to the girl with glasses who liked to theorize about the possibility of non-carbon based life forms over a bowl of Spaghetti-O’s.

My problem was I had no idea what to write. All I knew was it needed a ray gun and I wanted it to have a Blade Runner/Ghost in The Shell vibe. Nothing came to me until my wife and I were watching TV about a week later. A protect-your-identity commercial came on. I think it was for LifeLock, the one where the guy rambles at the screen while a truck drives up and down the street, his social security number written all over it in big, block numbers for all the world to steal. I started thinking about how everything evolves—even crime. I mean who would have thought you’d have to worry about someone stealing your identity?

Maybe no one but Philip K. Dick.

My mind started working. I asked myself, What’s next? What are people going to try to steal from you? It seemed so simple then—they’re going to steal you. Not your wallet. Not your cell phone. Not your laptop. Not your flat screen. Not your car. Not your identity. They want you. The physical you.

And why do they want you? There are only three answers—to sell you, to fuck you, or to kill you.

But it still wasn’t an idea. I knew I couldn’t force it. That never works for me.

Not knowing what else to do, I moved on to the protagonist. He’d need to be someone familiar with DNA theft. It would help with exposition. Okay, so why? Easiest way would be if it was his job, he worked to prevent it—genetic security. There’s money there too, because that’s the other constant—as crime evolves, someone else figures out how to profit from it. So, is he a good guy? No, not necessarily. A lot of people allege computer viruses are made by the same companies that sell virus protection.

Still not really an idea though, but it was getting there.

Okay, then—setting? The future obviously, but where? Easy peasy lemon squeezy. Had to be set on Mars. Mars is the place. The red planet occupies a primo spot in our popular consciousness. I thought if Mars was settled, wouldn’t all that fiction inform its development, its nomenclature, its culture—a network of man-made canals; towns named after places from Bradbury, Brackett and Burroughs; religion that’s one part Valentine Michael Smith and one part Martian Manhunter?

I really liked the John Carter of Mars books when I was a kid. I knew I wanted a heavy nod to it. I wanted the story to be a sort of a love song to everything I read as a kid. I walked over to my bookshelf and grabbed my copies of Burroughs’ books. It had been years since I read one. Skimming through them, something occurred to me—you could read John Carter of Mars as White Messiah Fable, you could make John Carter not a hapless adventurer who ends up in a strange and distant land, but a force of white imperialism, subjugating the savage Tharks, bedding the hot copper-skinned girl, and ruling the planet, because that’s how badass white dudes are and it’s what happens when they go native.

There was my idea. A part of Martian culture that’s transformed into something else and wants to free their planet from corporate rule and class warfare. They’ve turned the name John Carter into slang for The Man. They’ve turned militant. They’re ready to fight the power. They’ll call their organization Tars Tarkas. They’re the field slaves working trying to redeem the house boy.

So I wrote this big long piece where my protagonist steals some DNA, discovers a weapon hidden in the genetic code, and he has to go on the run from Tars Tarkas who’s planning on blowing up something important.

Halfway through, I realized I didn’t like. It felt stilted. It was too long. And I didn’t want Tars Tarkas as the villains. Corporations are the enemy.

When in doubt, keep it simple. There’s nothing simpler than a revenge story. So, there it was. The protag is hired to steal some DNA by a John Carter. John Carter wants a blonde. For what, protag doesn’t care. He’s never cared. He steals some hot chick’s DNA. Only John Carter wants something else—he wants the protag to grow it. Protag has never grown a person before, but John Carter has money (that’s why he’s The Man). Protag grows the girl. As protag watches her come to life in the vat of fluids, he’s forced to acknowledge that he’s been stealing people. The protag’s heart grows three sizes that day and we’re off and writing…

But I thought it was a good story, so I sent it somewhere else. Beat To A Pulp accepted it. I worked with Elaine to trim some fat and in a couple months it was up. It’s easily the most popular thing I’ve ever written. Lots of comments. Multiple reviews. A discussion on the boards of Isaac Asimov’s Science Fiction Magazine. A write up at the Books On Mars site

All from a LifeLock commercial. I should thank that guy. You know, I’ve got his social security number. I bet I could get his address.

Chad Eagleton is a writer living in the Midwest with his wife and dog. His work has been published in DZ Allen's Muzzleflash, Powder Burn Flash, A Twist of Noir, Bad Things Pulp Pages, The Pulp Pusher, Beat To A Pulp, Darkest Before The Dawn, and Crimefactory.
Posted by pattinase (abbott) at 9:00 AM

That's a great story, Chad, about a great story. When stupid people ask where writers get their ideas, they don't realize what a complex layer of history is involved. Sure this started with the LifeLock commercial, but was also informed by the subject matter of a deadline and restriction (some of my best stories have been writtent to fit rigid guidelines) along with your entire reading history and the desire to write a specific kind of story.

Patti - Thanks for hosting Chad.


Chad - I love it that you got some of your idea from a random TV ad. And you've got such a good point that crime fiction evolves over time. That, in itself, is really important, I think. Thanks for sharing your story.

So at least some commercials are worth something after all! :)

Hi Chad, and thanks for the shout-out. The minute David Cranmer sent me ""Six Bullets" I knew it was an extraordinary story with a poignant statement about being human and bringing life into the world. I loved the story then, I love it now. Wish it would get made into a short film.

@Bryon--Complex and usually not all that interesting.

@Elaine--Of course! And thank you.

What great recall. Most days, I can't even remember what I had for lunch.

It's a cracking story and one of my favorites at BTAP.

You set the standard for science fiction at BEAT to a PULP very high with "Six Bullets For John Carter." Many thanks, Chad.

And I enjoyed reading the story behind the story.