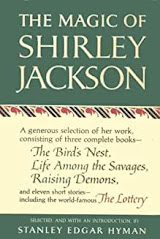 Clara is suffering from a tooth ache, which as her unnamed husband reminds her, has been bothering her since their honeymoon. Full of codeine and aspirin and despite her claim she feels funny and light-headed, he puts her on a bus for a very long trip into Manhattan. Her husband has insisted on this, claiming the local dentist is a butcher. It is very hard to understand why he doesn't accompany her in the state she is in. She has even taken a sleeping pill?

The bus stops at roadside cafes many times and a man named Jim begins to accompany Clara, talking of some magical place. He gets her into the city where her dentists sends her to a surgeon. During most of the story Clara seems only semi-conscious of where she is and what is happening. Of course, gas administered by the surgeon further removes Clara from reality. When it is all finished, Jim is waiting for her and they run barefoot into the hot sand.

Having been through many dental procedures like Clara's it is pretty familiar. And clearly Shirley Jackson has too. Much of the time, I was in awe Clara could navigate from place to place as drug-addled as she was. This story was seen as very Freudian at the time it was published with all those teeth references. Was Jim real? I doubt it. But clearly such a rescue was something Clara wished for. (And maybe Shirley too). If you have seen the Elizabeth Moss movie on Shirley Jackson, Clara is all the more familiar.

Oh, I do like Shirley Jackson's short stories, Patti! I haven't read her work in a while, and this is tempting me to go back to them...

This volume also collects her stories about raising her kids, much lighter fare.

I'll have sooner than last week, I suspect, though it's already an irritating/toothful (not yet literally) day.

Shirley Jackson's work seems to be getting more attention today especially in College classrooms. Her work is still underrated.

Not sure if I should bother, as two more of my posts disappeared on Monday. But here goes..

Even by my standards, this is nuts, as I am reading FIVE short story collections at one time, which (along with Martin Edwards's 700+ page book on the genre) leaves little time for other reading. The books are:

John Creasey as J.J. Marric, GIDEON AND THE YOUNG TOUGHS. A short collection of pretty short stories from EQMM about his London Police Commander. I've read all the novels too.

Chris Offutt, OUT OF THE WOODS (1999). His second collection seems to be a big leap forward in the seven years since the first collection.

Emma Cline, DADDY: Stories. You reviewed one of her stories last week. So far these are set in Los Angeles. One I disliked but the other two were very good.

Sholem Aleichem, TEVYE THE DAIRYMAN. If you've ever seen FIDDLER ON THE ROOF, you will probably be impressed as I was how closely parts of the show/movie follow the stories in this collection, especially the stories about marrying off his daughteers.

Michael Chabon, ed. McSWEENEY'S MAMMOTH TREASURY... So far, none of the stories have really stood out for me, despite such authors as Dan Chaon, Stephen King, Chris Offutt, Michael Crichton, and Nick Hornby.

Chris Offutt, "Out of the Woods." Gerald is 30 and has never been out of his county in Kentucky when his wife's brothers ask him to drive to Wahoo, Nebraska to retrieve another relative who is in the hospital after being shot by a woman. The description of his trip there and back, and his thoughts about it, are beautifully done. Nicely done.

Emma Cline, "What Can You Do WIth a General." I still have no clue what the title means. A middle aged couple is awaiting the arrival of their three grown children for Christmas, two driving in from elsewhere in California, one flying from back East. The story deals with their interaction, told from various of their points of view, as they bicker, eat, etc. I like her writing, if not necessarily her characters.

Todd Mason said...
This comment has been removed by the author.
12:11 PM

"WHat/General" is, in a sense, a means of encapsulating that you can't change other peoples' ways of being or interacting. A reunion would be a fine way to illustrate that..(nor can one tame a balky keyboard, yet I stubbornly try).

Not getting what you mean, Todd.
A lot of voices with that many authors, Jeff. I wish I knew why your comments disappear. No one else complains of that happening but maybe it does.
I have been trying to get Cline's short stories and too Offut. But I have so many books on hold I will never be able to read them all.

Oh, now I see. The title from Jeff.

For a while a month or two back I had problems with comments going into the spam section of comments on my blog. I had to check out that folder every day to see if something got stuck there. But lately that hasn't happened although I still try to check most days, just in case.

That does look like a good volume of writings by Shirley Jackson. And the story sound like a weird but interesting read. I have The Lottery and Other Stories in an e-book edition and The Tooth is one of the stories so I will check it out, and others.

I have FOUR more books to pick up at the library. It never rains but it pours.

The Cline is new, from 2020 I think. My library had it. I couldn't get the Offutt collection so bought it at ABE for a little over $5. If you email me your address I will be happy to send it to you when I'm done with it.