FFB: A NIGHT IN THE LONESOME OCTOBER, Roger Zelazny 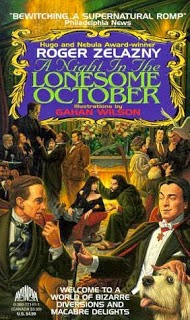 I love Roger Zelazny's early books, but for a time there he was writing things that didn't engage me nearly as much.  I kept on reading them, mind you (well, except for the Amber series) because I kept hoping that he'd return to form.  And then, with his final book, he did.  I should have written about this one for Halloween, but it slipped down in the stack and I didn't get to it until now.

To begin with, let me say that this is the best book you'll ever read that's narrated by Jack the Ripper's dog.  If that idea puts you off and makes you doubt that this is your kind of book, I'd say you're wrong.

The dog's name is Snuff, and the story he tells has to do with the Great Game that is played during the month leading up to Halloween in those years when there's a full moon on that date.  That's when the Great Old Ones of Lovecraftian lore make their attempt to enter a gateway into our world.  There are two groups of players, the Openers and the Closers.  Jack has played before, but it appears that none of the others in this game have.  So far, the Closers have always won, but it's often a tight race.  The players this time consist of Jack the Ripper, the Universal monsters (I know they didn't originate with Universal, but their characters in this book come from the movies, not the original sources), a Mad Monk, a witch, a Druid, a clergyman, and a couple of others.  Sherlock Holmes and Watson are also important characters, and all the players have familiars, of which Snuff is one.  The familiars are excellent characters, too, especially Graymalk, the cat, whose relationship with Snuff is one of the book's highlights.

The Game has rules, but sometimes they get violated, and it's fairly complicated.  I'm a little surprised nobody's developed it as an actual game to be played by gaming fans.  I'm sure it could be done.

A Night in the Lonesome October is stylish, poetic, at times hilarious, suspenseful, and just a whole lot of fun.  And did I mention the Gahan Wilson illustrations?  No?  Well, there's one for each night of the month, with maybe a couple of extras. Great stuff.  If you're looking for a treat, don't wait until next year to read this one.

I picked up a copy of this on the strength of Bill's review. And also liking Zelazny's work.

I read this a few years ago and loved it. I liked Zelazny's early work but after a while I lost interest. His later stuff seemed like he wasn't trying very hard. This ranks with his best work.

Books Narrated by Jack the Ripper's Dog hould be an Edgar category.

I read A NIGHT IN THE LONESOME OCTOBER last October: http://georgekelley.org/fridays-forgotten-books-663-a-night-in-the-lonesome-october-by-roger-zelazny-gahan-wilson/

Glad I can still visit Bill, Randy, Ron, Rick, Ed and others via their blog.

He was the only one of them I met in person and spent time with. So his absence hurts the most.

The only one of that group I met in person as well, but I definitely had a strong sense of the others through correspondence, thanks to your efforts primarily, Patti...so, further thanks.

And because of their blogs. Bill updated his almost hourly so he was a vivid presence back in the day.

And he was gregarious in correspondence lists as well...FicyionMags, WesternPulps, CF lists.

I have to get a copy of this book. It sounds perfect for October and Halloween. And I missed it last year when George blogged on it. I can't believe that. Bill Crider did great reviews.

It sounds positively bizarre, but then I think half of the point of reading is to take you somewhere else, and as I have never been inside the mind of a dog, perhaps I should try it, at least once...