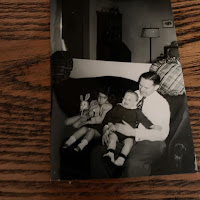 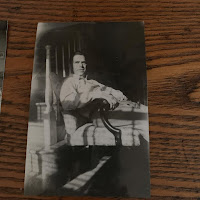 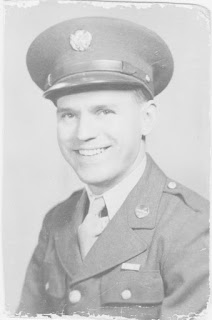 As a girl, I was probably more interested in my mother's childhood than my father's. I wanted to know if she shared my love of dolls (no) and candy (no). Additionally, my dad wasn't around as much. He worked long hours at a low-paying job, and when he was home he was often occupied with household tasks, grocery shopping (he did this chore for some reason), church, etc. But certainly he was not as reticent as my mother about his past. Although his memories tended to focus on areas of deprivation.
He was the sixteenth of nineteen children. His oldest brother, Vincent served and died in World War 1 and my father in the second World War. His mother, Laura Nase, died when he was twelve.

Ralph E. Nase started selling pretzels after school at six (could this be true?) and a series of jobs followed that one. The Nases (in a town filled with Nases and Naces-you wouldn't believe the phone book. This was no uncommon:Herbert S. Nace was born and reared in Sellersville. He married in 1891, Addie M. Nase, daughter of Peter and .. ) lived in a three-bedroom house. The boys, of which only four survived war, birth or early childhood illness, slept in the attic. The girls, I believe there were eight or nine surviving childhood, shared two bedrooms.
They grew most of their own food. Pigs were slaughtered in their cellar, in fact.

Herman Nase supported his family working in a cigar family. In the second half of the 19th century, cigar, textile, and other industries established companies in Sellersville. Cigar-making seemed to dominate the small country town.

My father was athletic and played sports, especially tennis. He loved to skate and sled. His great hobby was raising and racing homing pigeons. He inherited this hobby from an older brother. (The only other pigeon raiser, I can think of was Rocky). It is hard for me to picture Dad with his pigeons because he couldn't stand to have his hands dirty.

Approximately once a year, we would journey to Sellersville, which seemed like a long trip then but was only 25 miles, for a family reunion. We were the outsiders amidst a group that spent their free time fishing and hunting. My father fit in little better than my mother who especially dreaded these days. The reunions always numbered more than one-hundred people and I have vague memories of three-legged races, but that may have been our church picnic. Once in a great while, my uncle Nick (born Noah) would turn up in Philly, with pants too short, white socks, poor grammar and lots of gold teeth. My mother was on pins and needles during his visit. It would seem that she had the upper hand with this kindly, timid man, but it didn't seem to calm her. Stories about poor Nick to come later.

Dad went to a two-year business college (following the example of Uncle Nick) and began his career as an office manager in the mid-thirties. He worked at Oak Terrace Country Club where he met my mother.

Hereafter I am going to try to relate incidents rather than biographical information. I think it will be more fun to write and to read.
Posted by pattinase (abbott) at 1:09 PM

Fascinating stuff. Sixteenth out of nineteen children? Amazing. My grandmother was one of ten and I thought that was a lot!

It's interesting to learn those details about parents, isn't it, Patti? I'm blown away by the 'sixteenth of nineteenth' thing, too. I've never known anyone with a family that large.

I wish I remembered more about my mother's and father's lives. I wish I had written down the things my father did in World War II. There isn't anyone around now who could give me the details. My grandmother was one of 12 children. Interesting how families tended to be so much larger then.

Abdullah said...
This comment has been removed by a blog administrator.
4:51 PM

That is the great problem, Tracy and I knew it at the time. That I should have recorded what they said. Especially my grandmother who did talk about the past. You think large families will be close but my father wasn't close to his siblings at all.

You talk of the towns, but not what state this is. Nineteen children is a huge number, for any time, it's unimaginable, and in a two bedroom house! I'm enjoying these.