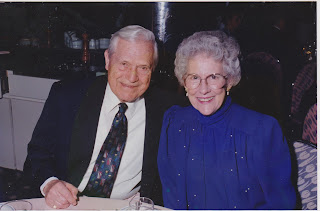 So Janet Grieb married Ralph Nase in 1941. He was drafted and other than a trip to his basic training camp in South Carolina, Janet didn't see him again until 1945, During those four years, she got her own apartment, much to her parent's concern, and got a job as a secretary in Philadelphia. She grew up. Ralph was in Ireland, at the beaches of Normandy, in Luxembourg, and in Germany. He never saw action, serving instead as a sergeant in Staff Headquarters. Keeping the books as he would do for the rest of his life.
When he came home something had changed. No one ever discussed it but about twenty-five years ago, my brother saw that the beneficiary on Dad's life insurance had changed in 1946 from Janet to his brother, Nick. Jeff asked them about it and they admitted they had trouble resuming married life and were separated for a while. My mother shared this information with me but left no room for any questions by telling me when my father got up to go the men's room at a restaurant.Clearly she was uneasy with even the few sentences she said. She seldom discussed her childhood, her early married years. Neither did my Dad.
There is a second clue but again it was so slight I never gave it much thought. And it was over blood type. She told me they were both positive (I can't remember whether it was O or A). I am A negative. But when I questioned how two positives produced a negative child, she called back later to say she had got it wrong and that my father was negative. I was 21 at the time. I never gave it more than a few moment's thought. Lots of people get their blood type wrong.
So because of these two very slight incidents when my brother did his DNA test, I decided to do mine too, never thinking mine would return so different from his. (to be continued)
Posted by pattinase (abbott) at 8:30 AM

Wow. This is a real life mystery.

No one who ever saw me and my father and my grandfather in pictures taken at a similar age could ever doubt that one came from the other from the third. Personality-wise, however, there are big differences (and yes, some resemblances).

I would hate that I found this out at an age where there is no one left alive to question.

Exactly the problem, Jeff. There is no one to ask.

My father's sister is still alive at 97, but I don't know how much is still left in there (if you know what I mean). One of the last of their cousins just died after many years with Alzheimers. I do have cousins a little older than me who might "know" something, but if I needed answers like yours I wouldn't really have a place to go. My mother died six years ago. She would have been my source. (And I don't think she'd have kept it a secret to the end.)

My mother was an only child and my father was the third youngest of 19 when he died at 96. All of my mother's friends are dead. But my brother has found out a lot.

So very interesting, Patti. I am a quiet person but I would never be able to keep all that in all those years like your parents did. After 50 years of marriage, my grandmother worried that people would know that she was pregnant when she got married. By then, who cared?

I am pretty certain my father believed me to be his child.

That does make a difference. I can see you would like to find out more, at first I thought it would not matter to me, but that is not true, I would be very curious ...

I wonder if the DNA test may eventually connect you to someone who knows more about the story.

Oh, this is interesting, Patti. I can see how you were motivated to learn more...

As fascinating as it must be disturbing to you, Patti. Seana's suggestion offers hope of solving this mystery. There's a book here, too, shouting to be written.

That must have been one hell of a surprise.

A guy I know in town was telling the story about how he and his brother were talking on the phone. They had already learned a few years ago of a third, unknown brother. One guy said to the other, "You're going to be surprised about this one." The second guy responded jokingly, "What? Mom had another kid?" Yep. She did.