What holds up best in THE VERDICT is Paul Newman's performance and the gritty feel Lumet gives it. In the 35 years since it came out, a million TV shows and movies have come up with more twisty plots, more diabolical insurance, law firms and hospitals. So it seems pretty tame now. There are a few characters who would have been knocked off nowadays,
Newman plays an alcoholic lawyer who's given a last chance for a big payoff by his pal. All he needs to do is take the settlement. But once he sees the comatose woman he's settling for, he goes for a bigger payoff. This was a highly watchable film, Lumet really knows how to give a film texture and make it seem real. Newman was expected to win the Oscar for this but he didn't win until THE COLOR OF MONEY a few years later. This was the first film where I remember thinking that he was finally getting older. Charlotte Rampling is the gorgeous young woman he has an affair with.

A year earlier in ABSENCE OF MALICE 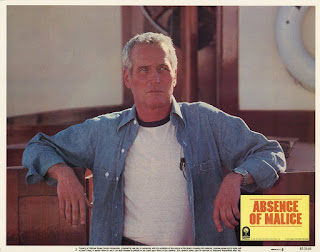 Oh, I did like this film, Patti. Thanks for reminding me of it.

Steve Oerkfitz said...
This comment has been removed by a blog administrator.
8:31 AM

I believe PBS has a doc on Sidney Lumet tonight.

The first thing we saw Rampling in was GEORGY GIRL, of course, as Georgy's bitchy (but hot!) friend.

We're watching GOLIATH and THE VERDICT is clearly one of its role models.

I though Phil was going to throw something at the screen. Wow!

I always remember Lindsay Crouse's performance as the nurse who gives the damning testimony in the climactic courtroom scene. Her heartwrenching shriek: "He said I'd never work again. Who were these people? Who were these men? I wanted to be a nurse!" really hit home with me. Will never forget it.

In a movie made now, she'd be killer.

I agree Patti, Newman did seem to look a lot older here than he did only a year earlier in FORT APACHE, THE BRONX.

And in the one about the reporter with Sally Field, I think.

Patti, I recently watched COOL HAND LUKE where Paul Newman's role reminded me of Steve McQueen in THE GREAT ESCAPE. I like his early films more than his later movies.

James Mason also excelled in this picture as the chief council for the hospital being sued, 'The Prince of Fucking Darkness' as Jack Warden's character calls him. Never mind that his accent makes no sense in this context.

Newman looked old all of a sudden because his character is depressed and broken. Older than his years. Maybe the most dispirited character Newman ever played. I think he got the Oscar for The Color of Money (not nearly as good a performance, or a film), because people wanted him to keep that pugnacious attitude so strongly associated with him. Yeah, that's also a downer movie in some ways, but at the end, Fast Eddie is still fighting back. His character here won't even answer Charlotte Rampling's calls. He wins, but it feels like he lost.

Yes, obviously he wasn't ill because he went on for years after this.