On revisiting SENSE AND SENSIBILITY 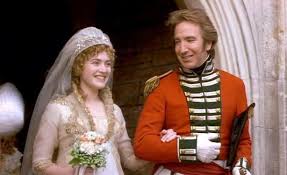 Costume dramas are hard to pull off, I think. I loved this movie at the time but on rewatching it, I think several of the actors didn't work well in their roles. Hugh Grant, doing his fluttery eyelids and stuttering routine seemed unworthy of Emma Thompson's affections. And Emma herself seemed to be too 20th Century for the part. Kate Winslett was perfection, however. So too Alan Rickman. And so too the secondary roles, which the British always cast right.

Does this happen to you on revisiting a movie you loved? Sometimes it works but sometimes....And although Emma captured the character in RETURNS OF THE DAY perfectly, this was a century earlier and she did not have the face and form for it for me. Something else too...can't put my finger on it.

Also, what happened to Hugh Grant? He has not made a major movie in a long time. Did he never recover from his escapades of the late nineties. And, strangely he now has four kids under five with two women, neither of whom he married.
Posted by pattinase (abbott) at 9:00 AM

Wow--Hugh Grant really ran off the rails when he broke up with Liz Hurley!

I think Emma Thompson's look is too angular and "modern". Although, of course, we know there had to have been women who looked like her in the 19th century, we're accustomed to a softer/MGM-esque view of women in historical costume. Also, Thompson's acting style is modern (unlike, say, Helena Bonham-Carter who seems to belong to whatever era her character is in). And, I hate to say it, but both Thompson and Winslett were too old to be playing "girls" of nineteen and eighteen years old.

Kate was just 20, coming off of her one picture HEAVENLY CREATURES. Other than that, yes. Just too modern a sensibility.
Leave it to Hugh to be strange even when he's engaging in courtship rituals.

Yes, she immediately had a lot of chops, didn't she? She often plays older.

I've actually had that happen a few times, Patti. So I know just what you mean.

I didn't know that about Hugh Grant either. He has been in a few things. Mostly we watch him once a year in Love Actually.

how about pride and prejudice with zombies? Personally, I have not intention of seeing that one since i don't care much for gimmick movies