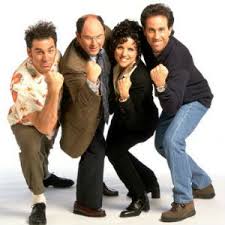 I can still watch SEINFELD twenty years later and laugh at it. What show broke as many barriers in terms of themes discussed? None. And this episode surely ranks high on the list of breaking barriers. So if THE SOUP NAZI is my favorite for pure laughs, this ranks a bit higher because of the subject explored.

“The Contest” saw the show at its most risqué. The four characters make a wager as to who can, ahem, control themselves the longest and, of course, all four struggle with their own temptations throughout the episode. Except for Kramer, who is forced to bow out within minutes after seeing a naked woman in the apartment across from Jerry’s and excusing himself.

And Don’t Forget… Elaine tragically misses out on her chance with John F. Kennedy Jr.

Quote: “But the real question is, are you still master of your domain?”

If you have to like all of the characters, this is certainly no ANDY GRIFFITH show. No MARY TYLER MOORE. But if laughing or exploring the 1990s is important, hard to beat it.

The Contest is definitely #1. We're also big fans of "The Pen," Jerry and Elaine's first visit to his parents' condo in Florida, which was frighteningly accurate.

That should have read, "You're hot??"

That should have read, "You're hot??"

I tried to watch 2 or 3 episodes and just didn't get it. So, along with R.T., I have to say I also found the characters annoying.

I have many favorite episodes of SEINFELD. But I'll go with "The Yada Yada." I laughed for week after watching that episode back in 1997!

I never saw an episode of this program, so I don't have a favorite one.

The one where George buys art from an artist he thinks is dying and, through the usual plot shenanigans, Jerry believes he has information that will save the artist's life (thereby reducing the value of the artwork).

George: "Who are you to play God?"

But, like you, I can still watch any of them and laugh.

I guess I should add that I never watched Everybody Loves Raymond, or Friends, or Frasier, a lot of other sitcoms.

Personal reminiscence: I was eight-months pregnant with the twins when Seinfeld aired its last episode. It's equally as hard for me to believe my youngest kids will be 18 soon as it is to believe Seinfeld has been off the air for a month longer than they've been born!

/I also associate the last episode with Frank Sinatra (who died the day after the last episode aired) and, sadly, the death of Phil Hartmann who was murdered by his wife about a week later.

Hes, that is absolutely the same choice I would have made - still sheer genius!

I still watch it a couple of times a week. I've decided that the biggest loser isn't George but Elaine. Just about everything she tries go awry esp. her men friends. And she can pick `em. She standing in this slum apt with this guy broke guy she's been writing cheeks to (he eats day old danish out of the garbage) and suddenly the door opens up and the wife walks in and Elaine says "So you're not just poor. You're married." And Mr. Dipshit just shrugs and says"Looks like it." Or stabbing a guy in the head because he says she has a big head. Or her endless arguments with salespeople of various kinds. I love her!

And don't forget "The Outing" - not that there's anything wrong with that.

Although Julia Louis Dreyfus was such a skilled actress she made any story line work. THE OUTING is a top ten. There are some lesser ones but only one or two I would really pan. I don't need to like TV sitcom.. characters. I just need to find them funny or make real life situations seem that way. On a three hour train ride today, a man behind us spent his whole time talking with an AMTRACK person on the phone about why he didn't get the business class seat he paid for. That would make a great SEINFELD episode.

I love this show and watch it often. There were so many great episodes I find i hard to pick a favorite. Sometimes a single scene will stand out more than a complete show, like Mel Torme singing to Kramer, or George telling how he saved the whale.