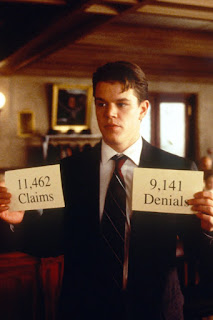 Somehow I managed to miss this one. Based on the John Grisham novel, directed by Francis Ford Coppola, and featuring a very good cast, (Damon, Claire Danes, Jon Voigt, Danny Devito) it is certainly a credible film. But a strange one to me.

Newly minted attorney, Matt Damon, takes on two cases: one where an insurance company is not paying off the claim of a quickly dying boy and the other where a young woman is being battered by her husband. He partners up with Danny Devito and they go up against a huge insurance company and an irate husband. The film has good local color but the pace is very slow. It's as if the Memphis heat got to them. Maybe the book was similar in feeling. It clocked in at close to 2 1/2 hours, way too long. And yet it kept my interest. Go figure.Grisham liked these setups early on. Does he still favor them? Have you read a Grisham novel lately?

Funny, as Jackie just watched this again before we left home. Damon is always good. It did hold your attention.

I haven't read any Grisham in years, though I do intend to read the latest, which sounded like Connelly's The Lincoln Lawyer.

Funny, as Jackie just watched this again before we left home. Damon is always good. It did hold your attention.

I haven't read any Grisham in years, though I do intend to read the latest, which sounded like Connelly's The Lincoln Lawyer.

I swear I am only hitting post once. I don't know why it is double posting.

I swear I am only hitting post once. I don't know why it is double posting.

And I swear: I might be the only person in the world -- especially with a former career in law (federal/military court system) -- to have read nothing by Grisham. So, what am I missing? Which by Grisham is/are most worthwhile?

I read PELICAN BRIEF and it was awful. It was the first and last Grisham novel I tried.

I remember RAINMAKER being a good movie. DeVito was quite good as the ambulance chaser. Judging by the film versions Grisham does a good job of showing different types of law practice. THE FIRM has high priced sharks. TIME TO KILL has a one man, small town firm.RAINMAKER has Damon's character struggling to find work after graduating from a lower tier law school. Part of the plot is Damon taking a commission only spot with a firm owned by a mysterious, gangland attorney.

I haven't read any of his more recent books, but his earlier ones show a knack for pressing a paranoid button that I think most of us have. They focus on an average guy who finds himself at the center of a huge and evil conspiracy. Think THE FUGITIVE.

I think THE FIRM and A TIME TO KILL were good novels-of a kind. He does feature different kinds of law practices. Maybe not quite as good as the best Scott Turow but not bad at all.
It was a good movie and Damon is so believable in the part. Claire Danes seems too young for her part.

I read three or four of Grisham's early novels but not his first one. I found them interesting but no great shakes. I planned to read his first, A TIME TO KILL, which I've heard was much better than any of his later stuff, but for some reason never got away with it. The movies I've seen based on his books were okay but nothing I'd go out of my for.

I've read a few Grisham novels, and I think I like them most for the legal expertise he brings to them. But I thought Rainmaker (the novel) was very good. It made me think he wasn't just a hack. And I enjoyed the movie as well. I liked the Memphis feel.

Yes, the atmosphere was sensational. Maybe the length allowed it.

Bits and pieces of the movie have been coming back to me. I seldom think much of Mickey Rourke, but his character was so shamelessly sleazy that I couldn't help but be charmed.

Oh, yes, I remember this one, Patti! Only very, very vaguely, though. Thanks for the reminder.

I read Grisham's first three books. That was it for me.

Probably about when I stopped.