I am sure there were moments over the years before this when I was stunned by an episode of TV,. However this is the first one I remember. In this third season finale, Henry Blake gets his discharge papers and is going home. The episode gives a lot of detail about leaving, ending in a drunken party with the gang. In the last scene, which was apparently a surprise to everyone, Radar comes in with the news that Henry's plane back to the US has been shot down. The looks on the actors' faces reflect their real surprise at hearing this news. Sadly I can't find their faces, only Radar telling the news. 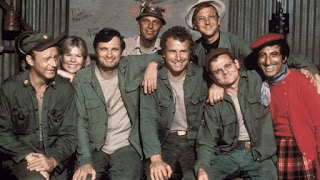 Thanks to my brother, Jeff, for rounding up these stills.

I remember when TV shows had 24 episodes (or more!) per season. Now it's down to just a handful. I'm watching THE X-FILES short series (6 episodes) and AGENT CARTER (10 episodes).

I never remember the names of my favorite episodes. I usually call them by my own assigned names, like the "Spa episode" of Frazier

Hey, in the early 1950s, I Love Lucy did 39 episodes a year! We're also watching the 6 X-Files episodes and it seems ridiculous.

Hey, in the early 1950s, I Love Lucy did 39 episodes a year! We're also watching the 6 X-Files episodes and it seems ridiculous.

Yes, the X files is disappointing although it is pretty much like the originals. I guess TV has improved a lot.

And I know just which one you mean, Charles.

And you remind me: RIP Wayne Rogers.

The "Ski Lodge" episode of FRASIER: full of misunderstood motives, people going through the wrong doors into the wrong rooms with the wrong people. Very much the witty French farce.

I would have trouble choosing a favorite episode of Frasier. And I think I already did and it was that one.

In the early 1990s, one of the regulars on “Thirtysomething” was suddenly killed in an accident. It was a shocking twist.

Wasn't it Larry Linville or something like that? But yes, that was a good episode. Just one thing nigged at me. When Radar is reading the telegram/message he says the plane spun in before crashing into the sea. That detail probably wouldn't have been included in such a message.

I also read that the producers were unhappy with MacLean Stevenson and killed his character off to avoid any chance of a return engagement.

Yes, Linville. One of my colleagues at TV GUIDE was his brother-in-law, Jay Guydon's sister now Linville's widow.

The spa farce episode, the Roz and Frasier almost tryst episode, and the No One believes Frasier can be dating Sela Ward episode are among my favorites of that series.

There were 67 episodes in two seasons of THRILLER. 1960-62. However, anthology series had fewer actors to exhaust, more writers even than serialized series then to draw upon.