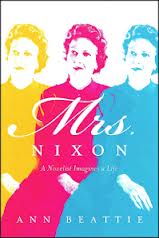 Sometimes, well often really, Phil's work influences mine and this week he's been reading Ann Beattie's book on Pat Nixon, MRS.NIXON. It's not just about Pat but also various influences on her life, reflections on the times. It refers to a lot of short stories because Ann Beattie is primarily a short story writer. And I was able to read three of them online-all enjoyable.

Delmore Schwartz. "In Dreams Begin Responsibility", which imagines the narrator seeing a movie of his parents' courtship and of his desire to stop it and the reel before they went on to make each other so miserable.

Peter Taylor's, "The Forest" which I will look at in more depth on Friday.

Russell Banks, "Sarah Cole: A Type of Love Story" which turns the princess and the frog tale upside down.

I am still working out how these fit together, but they did. I think it has something to do with the chasm between the sexes in what they expect to get from a relationship.

What great short story have you read recently?
Posted by pattinase (abbott) at 1:30 PM

I've been reading a lot of short stories lately, though I'm pretty sure no one would label them "great"? There have been some very good ones by science fiction writer Harry Harrison, in his collection 50 IN 50, I'm enjoying Father Brown stories in THE COMPLETE FATHER BROWN and some marvelous pulp stores from Black Mask in THE BLACK LIZARD BOOK OF BLACK MASK STORIES.

Great? That would be tough to say. I've liked quite a few things I've read and several have done the job of making me look at the author's longer fiction - Sean Chercover's EIGHT LIES (ABOUT THE TRUTH) comes to mind - but I'd have to think of anything I'd consider great.

I've read most of Beattie's stories so I suppose I might look at this book.

Nothing that jumps out. But I do like Anne Beattie and the Delmore Schwartz story (c/o Lou Reed).

I finished reading Jack Vance's MAGIC HIGHWAYS, a collection of Vance's early short stories just published by Subterranean Press. The early Magnus Ridolph SF mystery stories are fun to read and border on greatness (to me, at least).