HOW I CAME TO WRITE THIS BOOK: Warren Moore 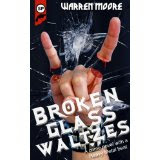 Blame it on Blue Ӧyster Cult and Jim Thompson. Blame it on Motӧrhead and James M. Cain. Or Glenn Danzig and Harlan Ellison. Loud, fast music. Doomed narrators. A soundtrack for the ride on the Hot Rails to Hell.

I was driving around Lexington, Kentucky, one night in 1990 or 91, maybe running errands, maybe running from a Master’s thesis I didn’t know I’d never finish – it could have been either or it could have been both, and I don’t remember anyway. I had been reading private eye fiction, and wandered from there to full-on noir, the old stuff, the Cain, McCoy, and Thompson. It left a bitter taste in my head, but I wanted more. I was between bands; I had put three years into a jangle-pop band when Lexington was supposed to be the next “next Athens”, but it had finally collapsed, and I wanted to play Loud and Fast. I was a longhair, but I was no fucking hippie. I was dreaming on darker trips – straight-edged lifestyle, but pumping the crazy into my ears like I was poisoning Hamlet’s dad.

A friend of mine had given me a tape of a bunch of tracks by the Misfits -- horror-punk. Metallica’s Garage Days Re-Revisited had been out for a while, but I had come to the Misfits by backtracking after discovering Glenn Danzig’s solo work. I didn’t listen to much Metallica – it wasn’t dangerous enough – the slackjawed kids at the arcade listened to that shit. Motӧrhead and the Misfits? That could still scare people. That was still over the top. And that intensity and loss of control was what I enjoyed. So I was rolling down Nicholasville Road, in a Chrysler LeBaron, and I was 25 and listening to the Misfits. “Die, Die My Darling” came on.

And I saw a scene in my head, a scene backlit by the headlamps of the oncoming traffic, a scene that I could imagine Cain writing if he were still around, or Thompson writing to scare an advance out of an editor. I cut through a parking lot, turned around, and went back to my apartment. The computer was in the living room; I sat down, got out of my own way, and wrote four pages – maybe a thousand words.

I had a man, a woman, and a dead body, and I didn’t know how they had gotten there, but I knew I had to figure it out, and I knew it was going to be called “Die, Die, My Darling.” Until the next day in the university library, where I discovered that the Misfits had lifted the title from a grade-B horror movie, as they often did. So I had to find something else, and eventually I would.

The characters came from the clubs I had played and the ones I hadn’t, in Lexington and back home in Cincinnati, where I was watching better-looking bands doing the human jukebox bit and blasting their sound through the pheromone fog of the girls at the edge of the stage. And yeah, you do music because you love music, but sooner or later, you also do it because you think a girl might like it and want you, and if you’ve been an outsider like I was for a lot of years, the prospect can be intoxicating. But what if you wanted – or were wanted by -- the wrong girl?

Click. I had a structure that would get me to the scene I had written. I stole time at school, and after, when I was back in Cincinnati at the magazine. I’d put on headphones and fire up the Loud and Fast until I found Kenny’s voice, and I’d write a few pages or a chapter in a day. Somewhere along the way, I got my last scene, and I wrote it, and then I wrote the story that would get me from my man (now named Kenny) and my woman (now named Jean) and the dead body to that last scene. And it had turned into a book, and the book was loud and fast.


Warren Moore is an English professor at Newberry College, in Newberry, SC. Broken Glass Waltzes is his first novel, and he has published short fiction in Low Orbit, Collage, and The American Culture. Along
the way, he has been a journalist, a DJ, a tire and battery salesman, a magazine editor, a stand-up comic, the janitor at a convenience store, and a drummer in a wide variety of unsuccessful bands. He live iin Newberry with his wife and daughter, and blogs under the name “Professor Mondo” at http://profmondo.wordpress.com.
Posted by pattinase (abbott) at 8:52 AM

Sounds like a cracking read. looking forward to it.

Love the influences. I'm a metal head myself, been influenced by lots of bands. Motorhead and Danzig certainly, but also WASP, Black Sabbath, Megadeth etc.

Thanks for lending me your soapbox, Patti! And just for the record, the "action shot" of me was taken by the lovely Jess Parrott.

Patti - Thanks for hosting Warren.

Warren - I have to respect an author who's inspired by music. Good on you to go with it!

Always good to hear I'm not the only metalhead crime writer...

This sentence alone -- "I was dreaming on darker trips – straight-edged lifestyle, but pumping the crazy into my ears like I was poisoning Hamlet’s dad" -- has got me wanting to read his book.

Thanks, y'all. I hope you enjoy it.