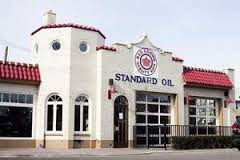 Grosse Pointe Park borders Detroit, and one of the poorest areas of Detroit. For many years the Park has been suffering a downward slide as stores emptied out and the housing stock declined. The picture above is of a vintage gas station and is the first piece of a new development for the area. The Red Crown has just opened there and looks to be a fabulous place for cool food and trendy drinks. And miraculously they were able to keep the facade untouched.

But that is just the beginning because the entire four block stretch of retail shops is all being redeveloped by the civic minded Cotton Family, who have also done much for medical services in the area. And not just the retail area. They have also been buying declining housing stock, making repairs, and renting units at low rents to college and medical students. On the retail end, a church is becoming a brewery, an old market is becoming a bakery, and at least two other restaurants are coming in. A hospital health system with ties to the Cotton family will broaden its facilities at one end. The entire stretch may be pedestrianized.

On the west side of Detroit, there are several trendy suburbs like what the Cotton family have in mind.. But the Grosse Pointe Park Development will be much closer to Detroit and will spring up almost overnight.

GPP is an interesting city. It is the only one of the Pointes to routinely vote Democrat. It has some of the biggest homes in the area and some of the most modest. It has two lakeside parks. But its proximity to Detroit has always been seen as a negative. Perhaps the Cotton family will make it the gem it deserves to be.

Good to hear about some of the recovery. I hope it continues.

It's great that a family is investing in Detroit. We have a number of local groups that are working to build (or rebuild) Frank Lloyd Wright buildings in and around Buffalo.

Now we need some businesses to invest in Detroit. To provide jobs and taxes. The Governor appointed an emergency financial manager who looks like a crook to me.