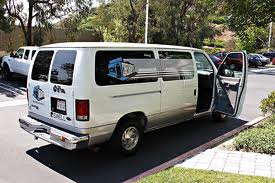 Patti, you must be aware of our recent local story about a man in a white van.

A few weeks ago police were called to our local Cracker Barrel Restaurant. One woman reported that a man in a white van had aggressively flirted with her while she was on her way to work, offering her a ride and suggesting that she get into his white van. She made up a diplomatic lie to fend him off and refused the ride.

She thought nothing of it until another worker at the restaurant reported that a man driving a white van had grabbed her and tried to hustle her into his white van in the parking lot.

The police were called and the Louisville media ran the story. In the next two days there were two more reports from parking lots in Louisville, one right next to a Cracker Barrel there.

As my wife and I were driving to Louisville, we noted the high number of white vans on the road and remembered that we used to have one ourselves. My hair was not salt and pepper then, but it is now and I remarked that if we still had it, someone might consider me a suspect.

Days went by and there were no arrests. Bardstown is a small tourist/college town with a small police force. The police chief was quoted in the paper as saying that he didn't realize how many "scruffy" men with salt and pepper hair and driving white vans there were--until he started looking for one.

The story began to take on the paranoia of the-monsters-are-due-on-maple-street. The Louisville media ran it every day, one time showing a man with a van who fit the description--who said that he ran a respectable business with his van and because he was middle aged and a bit overweight, with salt and pepper hair, people were giving him unwarranted attention.

He said that every time he drove up to McDonalds carry-out, the girl behind the glass wanted to phone the police.

No arrests were made until about a week later when police arrested the woman who made the original complaint of a physical assault. Police said that they ran all of the video footage and what she said had happened could not have happened.

Furthermore, they discovered that she had given both her employer and the police a false name and that, under her real name, she had several outstanding warrants.

I love the use of the phrase "aggressively flirted" - very evocative.

Is there any other kind?

White vans seem to be cropping up everywhere right now. I just read this fascinating story in The New Yorker on-line; it's about a man who impersonated a kidnapped child, although he was much older and had different eye color, the missing boy's family accepted him (I think a documentary was made about the case). What jumped out at me was a tiny side note about a cold case investigator who spied on suspects from his--you got it--white van.

Wow, what a story!

I have not been able to aggressively flirt for years---it is called marriage.

By the way, at least it isn't a white PT Cruiser. i drive one and a few years ago somebody was robbing banks here and driving a white PT Cruiser. The only description was a white male, over forty, short hair and overweight. That meant I got stopped several times by local police including once where they did the full felony stop lay out on the ground thing.

Of course, the one time they did that was when two coworkers drove by a couple of minutes later. One the two ladies I worked with at a school rolled down her window and said "Kevin didn't rob no bank. He is too smart for that and runs way too slow. Ya'll got the wrong fat man."

Monsters due on maple street indeed.

Playful flirtation? Is that also aggressive? I think not. When I was younger I only wanted attention but never wanted the supposed follow through that most flirters are looking for.