What is the best sandwich you've ever had? 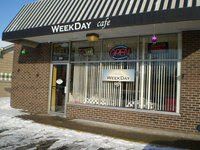 Well, Slow's Barbecue's Yardbird did not win the contest as the world's best sandwich on the Travel Channel although it finished in the top three. I've never had it but will probably cruise by some day.

Our food section on Sunday was filled with various ideas of the best sandwiches in Detroit.

I am partial to a cranberry bread and turkey sandwich a restaurant near me makes. It's at the Weekday Cafe in St. Clair Shores. Michigan. Chef Ed makes everything from scratch and most of it is to die for. It's closed on weekends and after seven on weekdays. It only seats a handful of people and is located in a strip mall.

Phil doesn't like to go there because it is run by a surly woman (Ed's wife) but it's a darn fine sandwich.

What's your favorite? At home or on the road.

Patti - Interesting question. I'm not much of a sandwich eater really. But when I do indulge? A properly made cheesesteak. Yes, you can take the woman out of Philadelphia....

I can't possibly pick one sandwich as my favorite, though I am partial to a turkey, stuffing and cranberry sandwich. There's a steak sandwich, a corned beef on rye, a shrimp po'boy, ... hard to pick one.

How about the sandwich that saved my life? In the summer of 1974 I was down and out in Paris, doing research on my senior thesis and trying to get by on about two dollars a day after my cheap hotel. (There were still cheap hotels then). I lived on Tunisian sandwiches from several tiny places on the Left Bank. For three francs (75 cents at the time) I got a big round roll with tuna, sliced hardboiled eggs, potatoes, onions, spices and olive oil. I got tired of them after a while, but I still sometimes get a hankering.

The Italian sausage sub at the late lamented PIZZA JUNCTION was a favorite. Now, I'm partial to the turkey sub at Wegman's. Freshest sub roll I've ever tasted!

It'd probably be the Reuben sandwich my mom introduced to me, made by a deli that no longer exists: Kosher Murphy's in South Gate, CA.

I'm partial to cold "lamb armistran" on rye, which is made by this private club I know. They only offer it every once in a while, and I'm not even sure it's lamb, but it's very good.

That sounds like Nicoise Salad, Al. We had it as sandwich in Nice. Delicious. I am going to look for that one, Dave.
Po'boy next week, Jeff, if I am not blown off the coast.
Love both sausage and meatball sandwiches, George. I bet they did meatball well too.

Could it be The Specialty of the House, Dave?

There's a local shop that makes an amazing muffaletta.

Love those two. If I lived in New Orleans, I would really be in trouble. Not that I'm not.

I used to devour Monte Cristos in any diner that offered them. But it can only be a true Monte Cristo sandwich if it's dipped in egg batter then grilled so that you end up eating French toast with ham, turkey and cheese inside. The absolute best version I had used Gruyere cheese. Can't remember exactly where I had that one. Insane cholesterol count though - can't go near them now.

Best homemade sandwich: fresh tomato, hot-pepper hummus (Tribe or better), Swiss or provolone in a pinch, on any decent multigrain bread (Freihofer's or Wegman's will do) preferably with minestrone.

Best deli/restaurant sandwich: portobello with everything on something like Texas toast

Worst sandwiches I nonetheless desire and treat myself to occasionally: BK Veggie (Burger King); Wawa cheese sub with nearly everything (Wheat shorti), with half the contents spilling out almost of necessity.

I always go for a fully-dressed oyster po' boy with fresh hot fried oysters and crusty French bread. Every place in the metro New Orleans area claims to have the best but here on the Northshore, before Katrina, my favorite place was a little hole-in-the-wall called Captain Humble's. Alas, the hurricane put pay to that; now I'm partial to the po' boys at Phil's Marina Cafe in Slidell.

Sounds yummy, Deb. I like Mandina's for shrimp po'boys or the meatballs. And how about roast beef & debris at Mother's?

I love po'boys from John's in the Quarter, but my favorite sandwiches are the innovative homemade creations of Nicolo's Deli in Montclair, NJ.
They roast their own beef and pork loin, sear their own vegetables, and will make anything you like on their fresh baked bread.
My usual involves some sort of meat with smoked mozzarella, broccoli rabe roasted with garlic in olive oil, or sun-dried tomatoes, arugula, or their roasted long hot peppers. Even without meat, it tastes great.

Like John, the Monte Cristo (made as he states) was for a very long time my very favorite sandwich. Hard to find them though. I love a really good meatball sandwich, but have not found better than a so-so one here in Portland, though I understand there is a good "food truck" one in downtown I have yet to try.

Deb-will be in New Orleans next week. Any restaurant recommendations?

Todd-I had no idea Freihoffers was still around. Amazing.
This was not a good idea. These sandwiches are all too good not try.

These are my recommendations (bearing in mind I don't go into N.O. very often, despite living only 35 miles away):

Commander's Palace on Washington at Coliseum: The old New Orleans experience--you'll pay for it too.

Palace Cafe on Canal, owned by the Brennan's, but easier on the wallet.

Red Fish Grill on Bourbon near Canal--name says it all.

Jeff's recommendation of Mandina's is great too.

Wow. Thanks, Deb. We are committed to one dinner at some pricey French creole place on Bourbon Street but we have five other meals. Provided Issac doesn't hit, of course. You should come in and have lunch with me.

Red Fish Grill is also a Brennan restaurant, as is Commander's Palace of course. Somewhat surprisingly to me, I've gotten some good ideas from the New Orleans channel on the hotel TV that covers restaurants and some other places. Check it out.

I think I remember rightly that Mandina's doesn't take credit cards, but they are quite reasonable.

Oops, my mistake. I checked and Mandina's does take credit cards. Don't know what I was thinking of.

There are a couple of places on the Northshore that don't take credit cards, including an all-you-can-eat catfish restaurant in nearby Picayune, Mississippi. I didn't mean for my recommendations to sound like an ad for the Brennan family, but I don't go into New Orleans very often and when I do it's usually for an event, so it's generally at an event-type restaurant.

When are you in town, Patti? I wish I'd known sooner you were coming to the area; I'm hosting a church dinner on Saturday and a youth group function on Sunday. Unless they close school for Hurricane Isaac, I can't get to N.O. during the day--and if they do close the schools, I think we'll both have more to worry about than lunch--ha-ha!

Does falafel count? Twenty years ago I'd get them at a little cafe in Auburn California.
Michel
p.s. Patti, have a fantastic New Orleans visit!

Falafel is my husband's favorite. Thanks Michel.

Deb-Th-Su. But don't worry about it. It was just a fleeting thought.

I like The Reggie at Pine State Biscuits in Portland, Oregon. To die for.

Reggie Deluxe ‐ 8
The Reggie with an egg

Dang it, I thought I'd be the first to mention a falafel. A little place in Campbell, CA, made a great one. Jeff's suggestion of turkey, stuffing, and cranberry sauce is one of my favorites. There is a place in Kirkland, WA, that mades a great French dip. An Italian restaurant in Peekskill, NY, made a fine veal parmigiana, but I don't eat veal anymore. Heck, I love sandwiches--tuna, egg salad, ham and cheese, steak, you name it.

Falafel sandwich Philadelphia is a most preferable sandwich among customers and Makkah Market is famous for providing Halal products, Islamic Clothing, Islamic Books and many more Islamic items in Philadelphia.
Halal Meat Philadelphia

WOW! TWO MEMBERS ON THE SAME WEBPAGE? I guess that club's not so exclusive after all. I was going to quit anyway; that stew was giving me the shakes...

I believe a fellow named Jeffery something used to make that.