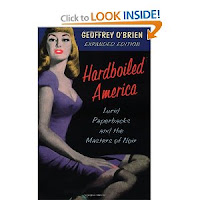 Todd Mason will gather the links next Friday. Thanks, Todd.

Ed Gorman is the author of the Sam McCain and Dev Conrad series of crime fiction. You can find him here.

One of the books about hardboiled fiction that rarely gets mentioned is Hardboiled America by Geoffrey O'Brien. He's a literary writer of real distinction (as well as the editor of The Library of America) but he's not slumming. He loves and understands the material. And he writes with real elegance.

His assessment of such major writers as Hammett, Chandler, Woolrich, Gardner are very much his own, and all the more fascinating because of it. He also takes the time to illustrate how literary fiction influenced hardboiled and how hardboiled influenced literary and mainstream.

For me he's at his best with the second generation of hardboiled writers, namely the Gold Medal girls and boys and how they spun off into Lion, Graphic, Ace, etc. I wish he wasn't so dismissive of John D. MacDonald. Here he takes the familiar path of the neo-noir critics who complain that JDM wasn't tough enough in his viewpoint. Most of his books concern middle class or working class men and women confronting crime. They're not gumshoes, they're not criminals. They bring their manners and mores with them when they try to extricate themselves from their problems. It's not that he isn't hardboiled; it's that he doesn't use all the cliches of hardboiled.

O'Brien shines when discussing Day Keene, Harry Whittington and, especially, Charles Williams. In fact I think his piece on Williams is definitive. Hard to imagine anybody handling Williams' career any more shrewdly.

The Hardboiled Checklist at the back of the book (1929-1960) is the most intelligent, exhaustive such list I've ever seen. Makes you wish you had three lifetimes just to read every book he takes note of.

This belongs on the shelf of every hardboiled reader and writer. It doesn't get any better than this.
Bob, the Gambler, Frederick Barthelme (Patti Abbott)

Taking its title from the famous French film and its subject matter from Barthelme's real life (as he would later document in DOUBLE DOWN when his brother Stephen stands in for Jewel) this is the story of a couple that becomes seduced by the glitz and excitement of gambling, quickly moving from slots to high stakes gambling.
Ray i 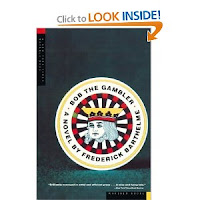 s one of the world's worst gamblers however.

How can you not get drawn into it with the first sentences: "What I'd always liked about Biloxi was the decay, the things falling apart, the crap along the beach, the skeletons of abandoned hotels, the trashy warehouses and rundown piers jutting out into the dirty water so I wasn't thrilled that in the last five years our dinky coast town had been turned into an outlet-mall version of Las Vegas....

Ray and his wife, Jewel, take the trip down the rabbit hole of gambling. Sometimes the book is funny, sometimes scary (they have a kid) but always a pleasure to read. If you prefer non-fiction, DOUBLE DOWN is equally wonderful.

Here's mine: The Girls of Silver Spur Ranch by Grace McGowan Cooke and Anne McQueen

The link on my name goes to Jerry House's blog. Oops. I have a post up for his week now. Here's the link:

I didn't know Biloxi had become a gambling town...but I guess they're becoming increasingly common...

I think anything near the riverboat coast.

Patti - Thanks so much for including my post in this week's edition :-)!