My Life at the Theater: STONES IN HIS POCKETS 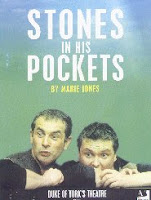 We saw this in London in 2003 (I think) at the Duke of York Theater.
Written by Marie Jones and performed in many countries, it is the story of a Hollywood production come to Ireland. Two actors, Conleth Hill and Sean Campion, play all the parts. The title is based on the death of a mistreated extra who commits suicide. It was lots of fun.
Posted by pattinase (abbott) at 7:52 PM

Never heard of this--but that is how Virginia Woolf committed suicide: by putting stones in her pockets and jumping into water.

The title is excellent.

Patti - I'm not familiar with this but I love the premise!

We saw it with the original cast in London in 2000, Patti. Really good. I just remember the main plot about the Hollywood movie crew overrunning the Irish town.