How I Came to Write This Story: B.V. Lawson

(Make sure you read to the bottom and then comment, friends)


BV Lawson: How I Came to Write this Story: 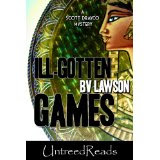 nce a musician, always a musician. Even if you're no longer performing, music gets tangled up in the As, Ts, Cs, and Gs of your DNA. I played the piano for many years before my chosen life path veered away from the instrument, and I haven't touched one in years. But I still play the piano in my dreams. My protagonist, Scott Drayco, was a musical child prodigy headed for an illustrious career when a carjacking ruined his dreams and steered him toward a life in law enforcement—first the FBI and then as a freelance crime consultant.

Drayco's music and academic past often come looking for him in his cases, sometimes haunting him, sometimes taunting him. His wide-ranging background and "magic decoder brain" (fine-tuned from working through Bach counterpoint) make him well suited to take on oddities like the one featured in my short novella, "Ill-Gotten Games," from Untreed Reads.

Since I began my writing career as a poet, I often find poetry creeping into my crime fiction. When I saw an article on the rise of Twitter poetry, I had the idea for a modern take on Arthur Conan Doyle’s tale where Sherlock Holmes receives coded messages in the mail. In this case, Drayco is hired by Benny Baskin, the "world's most diminutive attorney" (4' 9" in his platform shoes) to help prove Baskin's client is innocent of theft and murder.

That’s all fine and good until the man they suspect is the real killer starts sending Drayco quatrain clues via cellphone. (Sherlock would have loved smartphones.) Drayco races around the landmarks of Washington, D.C., solving the cellphone codes on-the-fly while trying to find five small Egyptian Hathor figurines stolen from a shipment to the Smithsonian—the same heist where the victim was murdered. The killer stays one step ahead, though, and his little "game" (which he dubs "Drayconian hide and seek") spells danger for Drayco. If he "wins" the game, he may ultimately lose.

As to how I chose the particular D.C. landmarks from among hundreds in the city, well, Drayco figures out the pattern eventually, and maybe astute readers will, too.

Art, poetry, and music were all used throughout history to express, define and inspire the best and worst of human experience, whether it's the ancient Egyptians or Arthur Conan Doyle. Sometimes, when these forces come together, they spur Revolution or Enlightenment. Other times, they inspire contemporary writers like yours truly and form the genesis of a little crime story of revenge, redemption and relationships gone awry.

By the way, Drayco still plays the piano on the Steinway in the corner of his townhome. And I’m jealous.

BV Lawson is still basking in the glow from her recent Derringer Award for the short story, “Touch of Death.” She also has a new noir story in Needle, “Push Comes to Shove,” and continues pursuing her novel series starring Scott Drayco.

BV will send a gift certificate for a copy of “Ill-Gotten Games” to two names drawn at random from comments to this post.

Another ex-musician! I agree--you never shake a musical past. I often catch myself reading something I have just written and thinking, "Too operatic," or sometimes "Not operatic enough."

Sounds like great fun, BV...and the writers of the current SHERLOCK haven't let the new technology escape his notice and usage.

As the world's fourth-worst trombonist (I met the three, and they were pretty bad, too), I think only a glancing engagement with the music sometimes can keep it alive for one...most of my better musician friends, though not the true geniuses of course, have tended to be rather blase about music since our early days...

This Drayco character sounds fascinating. I love the adventurous nature of this story, and this hunt foe clues...

Congrats on the Derringer!

I haven't played chess in a long time but sometimes I still dream of it.

Thanks, Patti, for hosting BV.

BV - I know exactly what you mean by music being in the DNA. I'm that way, too, and it does creep - no, stride - into what I write.

I had to laugh at your comment, Al, because I also sang (my undergrad degree is in voice performance!). And yes, that "too operatic" thought does cross my mind from time to time.

By the way, that anonymous comment was from me. Darn computer keyboard, sending a message before I was ready. :-)

I love the way Steven Moffatt has worked technology into his modern take on Sherlock with Benedict Cumberbatch, Todd. The three-patch (as in nicotine patch) problem, the use of cellphones and computers. Although there is something wonderful about how Sherlock solved most of his problems entirely in his head, without the need for external devices.

Thanks, Fleur! FYI, I enjoy reading your blog (it's one I've added to my feed reader).

Charles, at least you can pick up a pocket chess set. I'm still waiting for one of those thin, roll-out piano keyboards they used on "Star Trek: Next Generation." :-)

Do you still play/perform, Margo? I hope so! I'm not surprised music works its way into our writing. Scientists recently discovered that music works like dopamine on the brain, causing feelings of craving and euphoria.

I'm always interested in where creative ideas come from. This mix of Doyle, Twitter, and crime is intriguing!

Ideas are such funny things, George; I just wish they were more predictable! (Drayco doesn't have that problem, since his mind is always in "prestissimo" mode.)

Congrats to Al and Margot, the winners of the random drawing! An e-mail is coming your way.