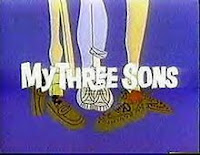 MY THREE SONS ran from 1960-1972 and changed networks (ABC to CBS) along the way. It was one of my favorite shows growing up. It starred Fred McMurray, William Frawley (later William Demerest), Tim Considine, Don Grady, Barry Livingston, Stanley Livingston and a myriad of other actors who came and went.

The father was an aeronautical engineer and a widower (was this the first to use this setup?) and had a nice low-keyed approach to fathering. The kids were never overly precocious or sentimentalized. The theme song has to be one the best ever written, recognizable immediately.

I was heartbroken when Considine left the show but it survived. Many changes occurred over its 12 year run as you might expect with a series using children. It remained high in the ratings until CBS moved it to Monday nights at 10 to make room for ALL IN THE FAMILY.

For more forgotten movies and TV, see Todd Mason.
Posted by pattinase (abbott) at 7:00 AM

While I wouldn't call it "one of my favorites" I did like it and watch it for years. Apparently William Frawley resented being written out for ill health, but as he died during the following year you can't argue that he was sick.

We watched this every week for years. It was a real shock to me the first time I saw DOUBLE INDEMNITY.

Todd Mason said...
This comment has been removed by the author.
9:23 AM

I have to agree with Dana, and make the point more forcefully than he...after M3S, and such Disney fare as RALLY 'ROUND THE FLAG, BOYS, I couldn't take MacMurray seriously in DOUBLE INDEMNITY.

I love that show! In reruns of course. I wish they'd put more shows on like My Three Sons!

True, Dana. As a kid I was familiar with MacMurray from THE ABSENT-MINDED PROFESSOR and SON OF FLUBBER and had a hard time seeing him in DOUBLE INDEMNITY.

We watched this show for years and years. I never had any clue that MacMurray filmed all his scenes for the whole season in a week or so. Took me a while to get used to seeing him in hardboiled roles, but I think I'm okay with it now.

I had no idea he filmed all his scenes at once. That means they needed to have all 36 episodes ready at the beginning of filming. Or may what we said was fairly interchangeable. Now that I think back on it, that may have been the case.
Frawley was apparently such a SOB, they might have done it anyway.

I had no idea he filmed all his scenes at once. That means they needed to have all 36 episodes ready at the beginning of filming. Or may what we said was fairly interchangeable. Now that I think back on it, that may have been the case.
Frawley was apparently such a SOB, they might have done it anyway.

It was a common practice in early television for some stars to film all their scenes in a week or two. TV wasn't given the respect of movies so sometimes the quality control was slip-shod.

Just amazing that those scripts were done to me. MTS did 36 episodes a year.

I remember it fondly and would watch it again if it were on. I don't remember much about it specifically, except they had a dog, but we watched it for years.

I liked it until Considine left. Once the kids grew up, married, and had kids I lost interest.

I knew Fred MacMurray as a film actor in many different kinds of roles. The first movie I remember ever seeing was THE EGG AND I (1947) with him and Claudette Colbert. It was the film that introduced Ma and Pa Kettle. For me, DOUBLE INDEMNITY was and continues to be MacMurray at his best. The sitcom MY 3 SONS was in my mind a real step-down for him, and I never watched it.

Loved THE EGG AND I. Book and movie both.

I remember this only vaguely from syndication. I am sure it is floating around on American Life or Antenna TV now :)