Flash Fiction Challenge: At Large in the Monkey House 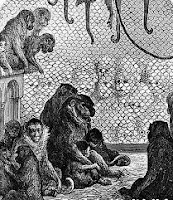 At Large in the Monkey House

“I am interested in having a cape made. Do you do that type of work?”

The fellow across the counter, wearing a handsome dove-grey morning coat, looked familiar, but the tailor couldn’t place him. He spoke with an accent—one that Joseph’s Neapolitan wife, Vincentina, shared. But no relative of his wife dressed like this man.

Joseph Valentino made capes for women on occasion but never one for a man. But work was work even if Mulberry Street was slumming. Why not an uptown tailor?

“No. It would be for outdoors.” The man wiped his brow with a large white handkerchief. “Perhaps something in fur. I like to walk in the park in fine winter weather.”

He walked to the door and stepped outside, pulling a tiny case from his breast pocket and putting a lozenge in his mouth. The humidity from Tina’s laundry business in the back of the shop took some getting used to.

Joseph reached for his pad and began sketching. After a few minutes, he signaled to his client, sliding the pad across the counter.

The man looked at it carefully and nodded. “And the fur?”

“Mink, I think. And a dark red lining would be elegant,” Joseph told him.

“There’s just one other concern,” the man said, turning the pad back so it faced Joseph. “I will need openings for my hands.” He drew a finger along the sides of the sketched cape. “About here, I think.”

“Normally a cape ties at the neck, allowing complete mobility for your hands, Sir.”

The man shook his head. “No. I’d need an opening on either side—at the bottom of the pocket.” He looked Joseph right in the eyes for the first time. “You can do that, I assume.”

“Certainly. A slit bound in silk would satisfy that requirement.”

“But not in red. A more discreet color, I think.” The man fairly hummed with pleasure.

“As long as I can acquire the proper materials, it shouldn’t take more than a few weeks.”

In truth, Joseph was a novice with fur. He used no regular furrier. Nor did he know what working with mink would entail. Perhaps his machine would need a special needle for the job—even a particular needle foot. But he would learn quickly because the price of this assignment would keep his family in coal for the winter and put red meat on the table. Perhaps there would be money enough to purchase Mr. Hoover’s new machine for Tina’s precious carpets.

The job went quickly despite the handwork needed. The cape was ready in less than a month.

As he made the final adjustments, Tina stood over him, breathless with wonder. “For a man, Joseph?”

“Yes, yes. And one I have seen before if I could just remember where.”

“This cape will make you famous.” She ran her hands through the fur again. “But why these silly slits?” She poked her fingers through the openings and wiggled them.

Joseph shrugged. “Rich people. Who can understand them? Something to make them stick out at the theater.”

“Stick out indeed,” Tina said, wriggling her fingers through the slits again.

Enrico Caruso walked into the zoo in Central Park in November, 1906. Over the summer, he’d taken his exercise at the Bronx Zoo uptown, but the recent commotion over Benga, a pygmy who slept in a hammock in the monkey house brought him here. John Verner’s exotic find brought riff-raff into the quiet of the monkey house. Benga, famous for shooting arrows into the bull’s-eye of a target set up amidst the primates, also marauded about the zoo on a hot day. On one distressful occasion, he followed the tenor himself, pretending to steal his cotton candy to please the crowd. Caruso would allow no more of that attention.

The zoo in Central Park was far less impressive but would do for Caruso’s purposes and save him the long carriage ride.

The cape was more glorious than he’d even anticipated. He strolled toward the monkey house, taking in the chill air. Once inside, adjusting his eyes to the darkness, he spotted her. He preferred blondes, and this woman was ideal for his game in her thin winter coat. She stood in front of the orangutan cage and watched a female nurse her baby.

Enrico looked around. Although his fur cape allowed him to blend into the dark enclosure, he had to be sure that pesky zoo guard had not spotted him. Only last week, the man had tapped him on the shoulder with his nightstick, warning him about standing too close to the women. He couldn’t identify himself in such circumstances, so he was forced to accept such treatment.

In a flash, Caruso stood behind the blonde, his knees pressed against her thighs. His fingers darted through the slits, grabbing a handful of the woman’s bottom. Just as quickly, he stepped away. Her scream echoed through the empty monkey house.

“Sir,” she said, spotting him in the dark.

He looked around, implying another person might be guilty of the crime. It was then that the same guard stepped out from behind a pillar fashioned with plaster of Paris to look like a tree. He gestured to the famous tenor.

“Who?” he asked, throwing the blanket aside. His bare feet hit the chilly floor in a rush.

Tina was standing at the kitchen table with the New York Post spread open.

Joseph saw the face first—the face that had haunted him.

“It’s Enrico Caruso,” his wife said, before he could read the caption. “He’s been arrested for fondling a woman in the monkey house in Central Park.” She giggled and then covered her mouth. “He told the zoo guard a monkey did it. The police want to know where he acquired a fur coat with slits for his wandering hands.”

Joseph’s heart sank. Was he now to be part of a criminal case? Would he be ruined by conspiring with a masher?

“He’s going to have to go to court.” Tina told him, unwilling to let him read a word of the story himself. “But they’re permitting him to meet his obligations at the Met.”

Joseph made noise with his tongue. “The Met’s patrons run City Hall.”

“Why would a man like Caruso need to find his fun in the monkey house?” Tina asked.

“They’re talking about closing it down,” Tina read on. “There’s a petition by a women’s group.”

“The Met?” Joseph said, scanning the article for further mention of his cape.

“No, Joseph, the monkey house.” She paused, and then giggled. “Where will he ever find a place that dark?”

“The subway is finished,” Joseph said. “And it’s dark down on those platforms. Darker than a monkey house.”

“What upper-class gentleman would take the subway?” his wife asked him.

“What society gentleman would pinch a woman’s bottom in a monkey house?”

Caruso was found guilty and fined $10. Neither patrons of the Met nor the Italian community believed the charges. No one ever discovered the origins of Caruso’s cape.

Other stories centering on a zoo can be found at the following links.

Rather Blochian, this one. (Only Bloch's Caruso might be even more sinister.) Caruso here would love a Tokyo subway. Elegant and neat.

Nothing like monkey business to stir a story :) Nice one, Patti!

Brilliant. Read it twice, I loved it so much.

Monkey business with Caruso. Well, you know what they say about tenors.
Ha! In Charlie Chan at the Opera, one of the characters says, "Did you ever meet a tenor you could trust?"

Apparently not. Loved your story, Patti. Didn't know where you were going with it. So I was surprised. Is there any truth to it?? Gossip, please.

PS My story is up and running as of this moment. Tardy as always.

Is this based on fact? Or am I that gullible? Loved it either way. Always a touch of mystery so deftly done in your shorts.

Good un. All kinds of neat little bits in this.

It is true save for the characterization of the tailor and his wife. No one ever did track him down.

looking forward to reading these, hopefully tonight. Thanks for putting together.

Well, here's my contribution. Figured I'd better link it before readin the others because I'm sure I'd never post it if I did!

LOL! I never knew that about Caruso. Ah, the artistic temperament.

Haha! This is terrific, Patti. Very enjoyable, had me chuckling at my cubicle.

Noir is where you find it! Good one, Patti.

I didn't know about that particular quirk in Caruso. It was only one of many.

I absolutely adore what you did with this, Patti. I love the history, and the imaginative piece with the tailor and his wife. This is so cool! Thanks for coming up with this challenge.

Thanks so much for your kind words and for participating, Kathleen.

Enjoyed your story very much, Patti. Do you plan your short stories or do they develop as you start typing? Short story writing tips are welcome.

This one was planned since it was based on a real story. Sometimes I think of character or a place and that's the start of a story. I rarely have the whole story planned because that takes a lot of the fun out of writing it. This one wasn't much fun to write but it was fun to do the research.

Nicely done, Patti! It reminded me a bit of Ed McBain's "The Molested," although with a lot more color in the setting.

I've been traveling, Patti, so I'm just now getting caught up on things like your latest Flash Fiction Challenge. Although I wasn't able to participate this time, I really enjoy these stories and events and am very grateful to you for putting them together. Kudos!