Who is Your Favorite Heroine in TV, Books or Movies? 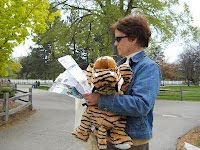 Midway to April 2's, flash fiction challenge A DAY AT THE ZOO. (You don't have to call it that. I'm not) If you haven't said you're in, well, get in. The more, the furrier.

Five brilliant British films from the sixties on TCM tonight.

Your Favorite Heroine
I am going with Helen Mirren's Jane Tennison in Prime Suspect. That show and Mirren showed what happened to a female police chief over time. Sure, Buffy is fun at 18, but this is what happens to her by 55. Kicking ass is not so endearing after a certain age. You need a more sedate approach.

Jane Tennison had to deal with sexism before Lizbeth Salander came along. She rose in the ranks but the job took its toll, making her a lonely alcoholic by the last series.

Only an actress of Mirren's caliber could pull this off. Great writing too.
Too bad they didn't give the US version a chance to find its mojo.

So what woman do you want to save your ass or catch the bad guy who put it in jeopardy.
Posted by pattinase (abbott) at 7:00 AM

I like your comment about kicking ass not being so endearing after a certain age. Very true.

There are many heroines I love... The Kathy Bates character in Harry's Law comes to mind, though I've only watched it off and on.

On the younger spectrum, Katniss from The Hunger Games books is pretty cool. Be interesting to see how the movie turns out.

I have seen a lot of trailers for it and some look great and others, not so much. I always have my fingers crossed for movies.

From the top of my head:

If I had given it any more thought, I'm sure I would have picked others, but these three sprang to mind instantly.

Scully from The X-Files. The show knew how to treat her. Fox Mulder wasn't always trying to protect her because she was a woman. She was a partner, an equal, and in many ways, more adept at "kicking ass" than Mulder.

Scully was such a real person. In many ways, she was the reason you stuck with the show even on its downward spiral. Muldaur was flighty; she was rock solid.
Have to read Bertha Cool.

In movies, perhaps Hermione from the Harry Potter series. In books, though, I'm a big fan of Dejah Thoris, Delia of the Blue Mountains, and Rannon Jystral. On TV, hum, I liked Sarah Conner in the Terminator series

I got some of those references. I am woefully under-read in science fiction and fantasy though.

A lot of good choices mentioned. Harry's Law has some (to my mind) ridiculous plots but is always worth watching because of Kathy Bates.

Bertha Cool is tough but not very nice (just a warning; books are worth reading).

Katniss definitely grows in the series and I'm hopeful the movie will live up to the books. Salander is probably the one woman you do not want as an enemy.

If you want blunt, tough-talking women what about Murphy Brown? I always thought Stockard Channing was criminally underused in THE WEST WING.

One of my favorite X-File episodes was the one where Scully got to be the hard-@ss while Mulder was off playing with "Bambi".

Emma Peel play by Diana Rigg in THE AVENGERS.

I don't think I remember that episode. I'd love to watch X Files it from the beginning again.
Oh, Emma Peel. Good call.
I haven't read Rucka.

Just like they under use the two great actresses in JUSTIFIED.

Yes, it would be hard to top Mrs. Peel. Good call, George.

Thursday Next by Jasper Fforde.

Movies - I'd say Sandra Bullock in "The Net". With everything against her, she still fought back.

Book - Ree Dolly in "Winter's Bone". When any other woman would have given up in despair, she just kept going because her family depended on her to keep them safe.

TV - Right now I'm enjoying Rebecca Madsen in "Alcatraz". She's one very determined woman, who doesn't like to take no for an answer.

Fforde is another writer I haven't read.
Now I saw the first three eps of Alcatraz and let my husband talk me out of it-that it would just be another ex-con on the loose each week. I am going to see if I can reconnect.

Patti. I wouldn't bother. It just gets more and more vicious and evil each week, Sam Neill is an awful character and it just isn't going anywhere. They give you no clue as to anything: who took them, why and how they came back, where they've been, nothing.

Even Jackie finally gave up.

Your husband is right, Patti, it does boil down to just another con showing up every week, each one worse than the last. And Jeff is right that it's very confusing but I still love the character of Rebecca, how she works and how everything that's happening seems to revolve around her family's past. I doubt they'll renew it as there doesn't seem to be any payoff coming.

I want Modesty Blaise on my side every time. The book version anyway, the screen versions not at all.

Patti, Thursday Next is a heroine in two fictional worlds. She has repeatedly save her own universe as well as all of books.

Take a peek at her first book "Eyre Affair" if you have the time.

She is like an action hero with an MBA.

Opps, not an MBA. I meant a Masters in literature.

I have that book somewhere.

Ripley in the Alien movies.

My first thought was Faust's Angel Dare. But, Dare's primary concern would always be her, not you.

Katniss would be okay minus the teenage drama.

What about bad gal instead of heroine? The mention of JUSTIFIED brings up Mags. Mags is like Dare however, your survival must be integral to her success or everything is a crap shoot.

Gena Rowlands turns out to be pretty resourceful in Cassavetes' GLORIA.

I prefer Modesty Blaise as a comic strip, at least when Jim Holdaway was doing the artwork.

Wasn't Gloria a terrific movie?
Mags is about the best anti-heroine around. Her competition would be the mother in ANIMAL KINGDOM.

I don't know why, but the first one who came to mind was Jane Fonda in KLUTE. Been a long time ago, but I was very impressed.

Before looking at anyone else's picks I'm going to say Emma Peel from The Avengers.

I was in college when Diana Rigg got married, and I remember mass depression on campus. Every guy wanted to be slapped around by Emma Peel.