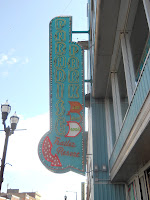 Phil claims that no TV show with a series arc has ever been successful in bringing it off. I guess this depends of what sort of arc you mean. FNL brought off the idea of showing you a Texas town through the guise of football for five years pretty well. China Beach gave us the tribulations of the war in Vietnam in good fashion.

But he has another sort of show in mind. He has never gotten over the failure of Lost, The X Files and similar shows--the ones that deal in something beyond regular life--to pull it off. He claims the writers are flying by the seat of their pants in this sort of show.

Some shows have successful arcs season to season: The Wire, Dexter, for instance. But a series arc with a theme more daring than FNL, are there any?

SNUBNOSE COVER ART can be found right here.
Posted by pattinase (abbott) at 9:00 AM

Not sure I've watched enough such shows. I guess the Walking Dead is trying this and so far it's been successful.

I have watched most of that series. Sometimes I think it works and other times not so much. It is more about forming community than anything else and how difficult that is. THey spend an awful lot of time deciding who and what to kill.

We'll have to see if they can pull it off, but MAD MEN seems to have an arc that will extend over the entire seven year run.

The problem is that no one knows at the outset how long a series will run, whether book or TV. So building a proper arc is near impossible, since you don't know when the curtain closes.

My biggest beef with TV series is the change of direction. So often, the vision starts one way during season 1, and then the thing gets renewed, and marketing or whoever changes the game each season.

Fringe is guilty of this, as are many others.

It's kind of interesting (to me, anyway) that FNL, Dexter - even The Walking Dead - are all based on books of some kind and the X Files and Lost are original TV shows.

(yes, I left out China Beach and The Wire, shows not directly based on books but you could probably make the argument they were based on a lot of journalism).

I doubt this is a lack of imagination on the part of TV writers but it may be a lack of faith by TV execs. For some reason TV (and the movies) have less respect for their own writers than they do for writers from the book or journalism world.

Phil is right about Lost and other similar shows. The first real "arc" shows I remember were shorter, partial season story lines on WISEGUY, which really did work. The Sonny Steelgrave (Ray Sharkey) arc was 10 shows. The Mel Profitt (Kevin Spacey; this also introduced William Russ as Roger Lecocco) was 12. The others were shorter.

The Walking Dead is a work in progress. Perhaps they took too long resolving the Sophia story but overall I think they've done a good job so far.

As I've said before, Fringe blew it this year with the absence of Peter - the center of the show - for too long, as well as the addition of the third universe. But we will stick with it to the end.

John-which explains the success of GAME OF THRONES and the failure of LUCK, I guess.
Have always meant to see WISE GUY. I will stick with WALKING DEAD despite my occasional boredom with conversations about the meaning of life. At least they have the guts to kill people off.

Seems as if Twin Peaks is a good object lesson: season 1 was coherent; season 2 was more a ragtag slapdash mishmash. Still, interesting all the way through.

I think perhaps Babylon 5 did a pretty good job of it in the show's five year run, with the larger story-line continuing behind and through the weekly episodes. I didn't even know there was a larger plot until the second year.

Don't watch that much tv shows, but I actually do think that Dexter has been pulling it off pretty good.

I agree with Richard on Babylon 5 being very successful in the series arc. Especially on repeat viewings (since we own the series on DVD). This is my ideal of series arc story telling that I desperately long to be repeated.

The key, I think, is that their needs to be a finite end. The author of the B5 show always planned it as a 5 year run. He wrote the story to fit that and apparently didn't worry about the show maybe going longer. Though he had plenty of spin off ideas he could have gone with later... if things had turned out differently.

I keep hoping a good story arc can be done, but honestly, I do NOT trust Hollywood to let the story be told.

Okay, I am renting B5 next.
The last season of Dexter was my least favorite. Two seasons of religious nut is enough. Hope they have some new angle in mind for next season. But all in all, a great show.

I presume a lot depends on the network or production company and how much they meddle. "We need a blonde with big tits. We need a quirky love interest. Let's move the setting into a coffee shop."

So many people are involved in those productions that keeping things on track must be a bear. Maybe that is why the Walking Dead guy fired everyone and took the whole thing over on his own.

This is a stretch but in the back of my mind I always thought of Barney Miller as a long piece of meta-fiction based on Detective Harris's writing. The last episode has him quitting the force and devoting his life to full time writing.

Although I saw Barney from time to time, I have no real sense of it. Except it seemed like better scripts than I was used to.

I don't know if these fall within the ambit of series arc but I used to enjoy watching THE SOPRANOS, THE WEST WING, BOSTON LEGAL, THE PRACTICE, and ALLY McBEAL. Now I watch only comedy serials because of time constraints. My kids are currently hooked on to THE BIG BANG THEORY, HOW I MET YOUR MOTHER, THE SUPERNATURAL, and SCRUBS. CASTLE and GHOST WHISPERER have done their time too. The last two are predictable.

Among the fantasticated series to maintain their "arcs" have been JOURNEYMAN, THE MIDDLEMAN, and (even if just barely) FARSCAPE. BUFFY THE VAMPIRE SLAYER managed to maintain its better than any such series running longer than five seasons (at least among US series, seven in its case), and such others as STAR TREK: DEEP SPACE NINE and ANGEL thrashed around for several seasons before settling into "arc"-driven grooves.

I'll warn the assembled that BABYLON 5 (which I believe was originally meant to run four seasons, but various factors extended that to five with a pendant film and a brief sequel series) has a remarkably stiff and rather goofy first season, and the fifth season is a bit disappointing, but the middle three seasons were the best sf series at least since THE PRISONER (another rather successful, if one-season, arc).

We had a long discussion of what constitutes an arc last night. To Phil it is the statement of goal and reaching it. For instance, how the guy on THE SHIELD covered up the crime of killing a fellow cop to protect their illicit activities and what that led to.
To me it is looser, perhaps just showing the sixties through a group of rather unlikable ad men. Or showing the interplay between the cops in Baltimore and various institutions: politics, labor strikes, schools, newspapers.

An arc - to me, anyway - needs to be a self-contained unit. That's why WISEGUY is the one you need to look at. Vinnie Terranova goes undercover to bring down various criminal enterprises and, when he's done, moves on to the next one. I'm sure you can get the first season on DVD. Try it.