How I Came to Write This Book: Nick Quantrill 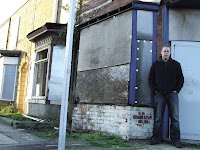 How I came to write – “The Late Greats” (by Nick Quantrill)

“The Late Greats” is the second novel to feature my Hull-based Private Investigator, Joe Geraghty. My debut, “Broken Dreams”, was a very deliberate attempt to capture something specific about the city using the decline of its fishing industry as a mechanism. Although “The Late Greats” takes place within the confines of the city, the focus is on the feel of the place and its wider relationship with the rest of the country. Hull is an isolated city on the north east coast of England. We’re resourceful and not easily impressed. We’re warm but suspicious. Finding the story I wanted to tell was troublesome. I collected newspaper cuttings, I made notes and I listened to people talk. Sometimes it works, sometimes it doesn’t. Sometimes the unexpected triggers an idea.

The seeds of “The Late Greats” were sown from something trivial. Music is one of my passions. I’m the kind person who goes to Record Fairs and delights in collecting obscure B-sides. I’ve put the hours in down at my local music venue, The Adelphi. When one too many of the bands I liked in 1990s bands reformed, I’d seen and heard enough. One band in particular pushed me over the edge. I won’t name and shame, but I’d always admired their willingness to take risks and change over time. However, their comeback tour saw them do nothing more than trot out their greatest hits. It was lazy and cynical. As a music fan, it left a bitter taste, but as a crime writer it was interesting. Bands invariably breakdown when personal relationships fail, big egos get in the way and all sense of reality is lost. Are the smiling faces we see just painted on? Are the words that come out of their mouths just meaningless platitudes? What really goes on backstage? My guess is that these comebacks must produce incredible highs and intense self-loathing. I was sure I could use it as the backdrop to a story. All good crime novels are driven by tension and conflict. All I needed was a hook and it was obvious what that hook needed to be – money.

The focus of “The Late Greats” is New Holland. Persuaded by their manager, Kane Major, to reform, Geraghty is employed as a general fixer, but his job description soon changes when singer, Greg Tasker, goes missing. The deeper Geraghty digs in his search, the more unpleasant truths he finds. At first I let myself be swept away – I’m a music fan – I plotted a discography, and if I’d allowed myself, I could have written a whole book on the fictitious band. Reigning myself in, I quickly discovered New Holland was just the starting point. Although they’re at the epicentre of the story, it was the outward ripples which interested me more.

As much as Tasker and Major are to the fore, Geraghty remains the star of the story. “Broken Dreams” saw him determined to find out who was behind the death of his wife in a house wife. What he discovered isn’t really the story now. It’s about how he moves on and decides to live his life. Despite the undeniable attraction to his work colleague, Sarah, the introduction of Julia Gowans, a journalist covering New Holland’s comeback complicates matters. “The Late Greats” is a novel about friendship, loyalty and what really constitutes success in life. Although it’s Geraghty asking the questions, there’s no doubt the questions equally apply to him.

Looking forward to reading this.