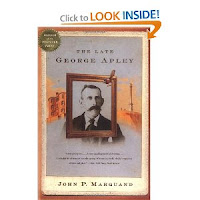 I was a great fan of John P. Marquand as a teenager even though he was already gone. He won the Pulitizer Prize for this book. But rather than dwell on one book among many novels and even more short stories, I want to remember him as a writer.

He wrote about the upper classes in early 20th century American but not in a idolizing or idealizing way. He pointed out their faults and foibles with humor, sympathy but also with a sharp knife.

Most of the novels are set in Boston and about what used to be called Boston Brahmins. He was a fine writer and I often see his books in antique stores. My library system has only this book and it is at one of the high schools. Oddly his biography is still on the shelves so you can find out about his life if not his books. This is one of his best and I also remember B.F. Daughter, Point of No Return and Wickford Point.

He was also the author of the Mr. Moto novels, about a Japanese spy. These were made into movies with Peter Lorre playing the gentleman.
Ed Gorman is the author of the Dev Conrad and Sam McCain series along with lots of other great stuff. You can find him here. 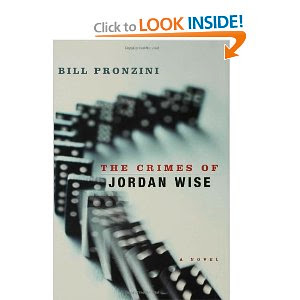 The Crimes of Jordan Wise, by Bill Pronzini.

Actuary Jordan Wise tells a joke on himself a third of the way through the novel: (paraphrase) an actuary is somebody who doesn’t have the personality to be an accountant.

If you watch many true crime shows, you see a lot of Jordan Wises. People who fall into crime through circumstance rather than those who go looking for it.

Jordan becomes a criminal only after meeting Annalise, a troubled and very attractive young woman who needs two things badly – sex and money. But in order to get the sex on a regular basis, Jordan must first provide the money. He embezzles a half million dollars and flees with Annalise to the Virgin Islands. In this first part of the novel, there’s nice James M. Cainian detail about how Jordan comes alive for the first time in his life. Some of this is due, whether he admits it or not, to the danger of committing a serious crime. But most of it is due to Annalise and his profound sexual awakening.

The central section of the book reminds me of one of Maugham’s great South Seas tales – lust, betrayal, shame played out against vast natural beauty and a native society that, thanks to an old sea man named Bone, Jordan comes to see value in – even if Annalise, her head filled with dreams of Paris and glamor, does not. Old Maugham got one thing right for sure – as Pronzini demonstrates here – a good share of humanity, wherever you find them, is both treacherous and more than slightly insane.

There are amazing sections of writing about sea craft and sailing that remind me not of old Travis McGee but of the profoundly more troubled and desperate men of Charles Williams who find purity and peace only in the great and epic truths of the sea. That they may be as crazed and treacherous as everybdy else does not seem to bother them unduly.

There are also amazing sections (almost diaristic sections) where Jordan tells of us his fears and desires, his failings and his dreams. In places he deals vididly, painfully with his secret terror of not being enough of a man in any sense to hold Annalise.

The publisher calls this a novel and so it is. Pronzini brings great original depth to the telling of this dark adventure that is both physical and spiritual. He has never written a better novel, the prose here literary in the best sense, lucid and compelling, fit for both action and introspection.

You can’t read a page of this without seeing it in movie terms. The psychologically violent love story played out against a variety of contemporary settings gives the narrative great scope. And in Jordan Wise and Annalise he has created two timeless people. This story could have been set in ancient Egypt or Harlem in 1903 or an LA roller skating disco in 1981. As Faulkner said, neither the human heart nor the human dilemma ever changes.

I have an FFB entry up on my blog and I'm going to try to do a zoo flash as well. Monday, right?

Having some computer problems. Will post my review soon as possible.

Okay, my reviw is up. Still having problems so I may be offline for some time later. We'll see what happens. Ah, fun and games.

Don't think I've ever read Marquand either, though I remember his name from younger days. I'm wondering how he compares to Edith Wharton; seems much in that tradition. Writers like James Jones and Nelson Algren were coming along then to bring an end to it.

I'd say offhand, that Wharton and James were a bit more literary than Marquand. And probably why they are still read in college classrooms.

I'd say Marquand makes an excellent transitional figure between Edith Wharton and Henry James and their style of social crit and the beats and black humorists who arose post-WW2, as does Sinclair Lewis, among a number of others.

Well, the attention to language in Wharton and James, versus the relatively more pedestrian and intentionally "transparent" style of Marquand and certainly Lewis plays a role there, too...in part because Hammett, among others, did that kind of transparency even better.

Why Hammett is still read even more outside college classrooms...

Marquand is similar to the later Louis Auchincloss in his milieu. Or Cheever for that matter. Lewis, Dreser and Upton Sinclair had more social concerns perhaps if not the stylists of James and Wharton.

A couple of years ago, I did a FFB on John O'Hara's short stories and I noted that John O'Hara and John P. Marquand together wrote the American experience of the early-to-mid 20th century. O'Hara focusing on second-generation (usually Catholic) immigrants and Marquand focusing on the upper-middle-class WASPs. I think it's sad that neither writer is read much today.

I was surprised and amused to see Sarah Silverman dedicate her autobiography to John O'Hara among several others...and then discovered she meant her sensitive and helpful stepfather. I imagine HE has read a little of the Other O'Hara...just out of curiosity, at least.

Patti...but I think the "close focus" guys were saying similar things in microcosm that "the big picture" guys were sweepingly...but it is a difference, I'll concede.

Contrast, say, Algren and Jones vs. Vidal and Mailer, in that next gen...