How I Came To Write This Story: Nic Korpon 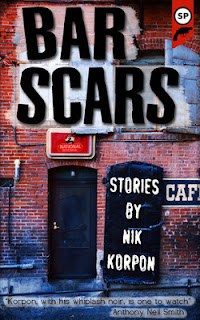 How I Came to Write the Story: “His Footsteps are Made of Soot”
From the collection Bar Scars, by Nik Korpon

I’d always heard of writers rewriting a story numerous times. They’d say things like ‘It wasn’t working’ or ‘I couldn’t find the voice’ or ‘I had nothing else to do that day.’ Fuck that, I figured. Write the story and be done with it. If it didn’t work, drop it and forget it and write something else that was more interesting. Revisiting a story a bunch of times from different angles sounded too much like homework, not writing. And yes, I understand and agree that the work needs time to mature and you should always revise until it’s right, and with novels I do just that. But I’m not very good at short stories and I get bored quickly.

That being said, of course Fate would set out to make me look like a hypocrite, as it seems wont to do. The version of “His Footsteps are Made of Soot” that appears in my collection Bar Scars (Snubnose Press) is probably the fourth version I’d written. The first one was called Home Surgery and the Jersey Shore, and I can’t remember what the others were. Probably because they sucked a big one. I think the first time I wrote it was somewhere around 2006. I was walking through the Giant in Hampden, a neighborhood in North Baltimore, at 3 AM or so. Some guy passed me in the aisle, pushing his cart with the one wheel wobbling. I couldn’t help but stare at the most random assortment of crap he had in there. Listerine, chuck round, mouse traps, shaving cream and more. All I could think of was that show Supermarket Sweep, where contestants ran around the shop piling everything not-nailed-down into their cart.

A couple days later I was passing the light hours with the other bartender and we got on the subject of home businesses, something we could do instead of getting people drunk professionally. Someone came up with the idea of becoming a home surgeon, likely because neither of us had health insurance to cover anything professional, and I flashed on the weirdo’s cart. The rest, as they say, is history.

The story I wrote sucked. It was twee and tried so hard to pluck heartstrings that it dislocated my fingers. I vaguely remember some plot device with a box of frozen corndogs, which I guess was me checking the quirky box. It went into some dark folder on my desktop for a while until I stumbled across it a couple times. The concept was still interesting, though none of the rewrites were working, largely due to the relationship between the narrator and his dead brother. Something about the emotional core of the story just didn’t snap, so it sat and collected mold, which was fitting, considering the eventual setting.

After I wrote “Alex and the Music Box,” another story in the collection, I came across a throwaway line I’d edited out about the near-blind lady next door listening to Press Your Luck really loud and I immediately discovered the mother I needed for “Footsteps.” I saw her living like a ghost as she grieved her dead junkie husband, all while her son tried to bring her back to the land of the living. The idea of loving a living dead woman who was loving a long dead man was infinitely more interesting to me. Add in a healthy dose of fire-ravaged ambiance that mirrored the characters’ inner landscapes and Fate was well on its way to making me look like a jerk. Somewhere in that house, beneath ash and damp newspapers crawling with silverfish, I’d found the voice of the story. All I had to do was let it mold.
Posted by pattinase (abbott) at 3:30 PM

Cheers, David. I'm hoping to have more out soon.

And a huge thank you to Patti for having me!

Patti - Thanks for hosting Nic.

Nic - Thanks for sharing your story. I really understand exactly what you mean about running into the truth about first drafts. They nearly always need to be revised. And sometimes, putting it aside for a bit is just what's needed. Glad you kept on with it!