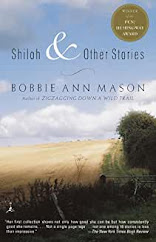 Of course, it you are about to choose a story in an anthology and you see one with your hometown in the title, that is probably the one you will choose. Bobbie Ann Mason won awards for this collection of stories and the novel that followed it, IN COUNTRY. She was an especially influential writer in the eighties and was known for her use of KMART realism where she peppered her stories with specific names and titles-something wasn't done as much before her. In other words, she replaced a name like Five and Dime with Woolworth's. This can be overdone, of course, but on the whole I like specificity, do you?

"Detroit, Skyline, 1949" is the story of a visit by a mother and daughter from Kentucky to Detroit, where family members have moved for better jobs. Nine-year old, Peggy Jo (probably Bobbie Ann) is especially eager to see the sky-scrapers. It turns out the city buses are on strike and the family has no car so this dream is not realized. The differences between life in rural Kentucky and urban Detroit get a lot of attention and the TV is a new thing for Peggy Jo. A lot of the story also concerns the "red scare" going on at that time and how unions were blamed for introducing socialists into the factories. Her mother has a miscarriage during the visit and Peggy Jo is a bit overwhelmed by so many issues. Perhaps I was too. This story seemed to have one too many themes for its own good. But the writing is always great and her characters jump off the page. The title story is especially terrific in this collection. I have not read any of her more recent books, has anyone?

Sounds like a good collection, Patti. And I think you chose a great story from it. I'd have done the same thing if there were a story about my home town!

Not home (again) so can't check lists, but yes, I like specificity and I really like Mason. I have read this and IN COUNTRY and other books by her, including a memoir. Will try and check when we get home, if I remember.

Currently reading the third collection of stories by Amy Bloom. Also bought (as my library doesn't have it) Ann Hood's collection, AN ORNITHOLOGIST'S GUIDE TO LIFE.

I am listening to Mason's memoir through Hoopla. I never seem to finish them fast enough for the system though. Hard for me to listen as long as I can read. My mind wanders more.

I read SHILOH AND OTHER STORIES when it was first published. Like Jeff, I read IN COUNTRY. Then, for some reason, I stopped reading Bobbie Ann Mason. Time to revisit her work.

I am not sure why I did too.

Finished WHERE THE GOD OF LOVE HANGS OUT by Amy Bloom. he title story, the last in the book, is the one I'd recommend the most. There are also two series of stories - one from her two earlier collections about a woman, her son and stepson after her husband dies. The other is about two couples, close friends, where one wife and the other husband fall in love with each other. Time passes as they act on it eventually get divorced and marry each other, then (SPOILER) he dies (END SPOILER). The main problem with these is the other husband and wife in the stories are ciphers at best. No, read the delightful title story.

I read Mason's stories as I gather them (usually), but I haven't picked up one of her collections for a while.

I think the overstuffedness of the short story was part of the desired effect, to give a sense of the girl's overwhelmed state...

Some writers, not a few in THE NEW YORKER over the years and such more wider-array writer as Wilma Shore, would also anchor their stories in shared reality by not avoiding the Actual Brand Names, but Mason was among those who did so among characters leading lives of less luxury and not so much with glamor-brands (though Shore certainly did so with irony, rather less clumsily and thirty or so years ahead of the likes of B. E. Ellis), in fact trending toward anti-glamor...the K-Mart realism you mention rather than Bergdorf's irony.

Give me KMart any day! Funny to see nostalgia set in after a while. Even with stores you found mediocre at best.

Never heard of the author. Here's my first submission for SS Wednesday:

Patti, You have convinced me I must try something by Bobbie Ann Mason. I had not heard of her before you posted about a story in a previous post.

I like the idea of specificity in writing, especially if it is places in the US I will recognize and have some connections to.