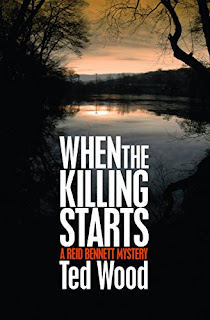 Reid Bennett is the entire police force in tiny Murphy's Harbour, Ontario, Canada.  Of course he gets a lot of help from his German Shepherd, Sam.  While he's on vacation, he's approached by a woman who asks him to find her son, who's joined an outfit that supposedly trains mercenaries.  Bennett is a little reluctant, but he agrees.  Before long, he's on a wilderness adventure that involves lots of shooting and a serious wildfire.  He recovers the son, but that's just the beginning, as Wood starts springing the plot twists.

If you're looking for villainous villains, lots of action, a little sex, and a very cool dog, you've come to the right place.  There are a few plot problems, not the least of which is the faithful Indian companion deus ex machina, but Wood's writing is strong and his pacing is exemplary.  Bennett is a hero like Jack Reacher, tough, strong, and sure of himself.  I'd think Reacher's audience would like him a lot.

Ted Wood is a Canadian author who had a good bit of success in the U.S. with this series.  I believe there were ten books in all.  He wrote a couple of others as Jack Barnao, and I liked those, too.  He might not be completely forgotten, since I believe the books are available for Kindle.
Posted by pattinase (abbott) at 12:00 AM

This is an author I've not read before, Patti, but I like the setting, and the story sounds interesting. I may have to look him up.

I'm with Bill here. I really liked the Ted Wood books. The final one was hard to find and cost a fortune when I first looked for it (the library didn't have it), but a few years later I looked online and there it was, for just a few dollars.

Bill Crider loved Ted Woods's books. I have a number of them...but--same old story--haven't read them yet.

I just looked at quite a collection of Ted Wood novels at my library so when I saw Bill had reviewed one, I borrowed it.