Short Story Wednesday: Stories from THE SUMMER BEFORE THE SUMMER OF LOVE, Marly Swick 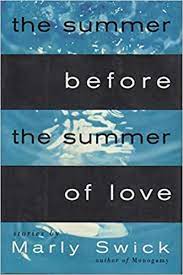 This has been one of my favorite collections of stories since I came across it in the nineties. Marly Swick, now a retired English professor in Missouri (I think), seems to have written all of her stories and two novels in the nineties and early 2000s. Since that was the time I was writing mainstream short stories too, I bought a lot of collections. Swick's are very straightforward, easy to read stories.

The title story is about the breakup of a marriage and much of it takes places during a trip to see the Beatles that the mother takes her daughters on. When she leaves the hotel room in the night and her slip is returned in a paperbag the next day, it drives the older daughter out of the house. It also changes the daughter's taste in music overnight from the Beatles to the edgier groups.

The second story "Ghost Mother" is a favorite of mine. Two screenwriters are adopting a baby from a mid-western teen, who moves into their house for the end of the pregnancy. It is a very poignant yet not sad story and some of it is framed in how the writer might write it in a screenplay.The reader expects the surrogate mother to be exposed in some way and this never happens to our relief.

Just noticed we have been doing this for more than a year. Don't feel obliged to keep it up if it's getting old.

It sounds like a very good collection, Patti. Interesting, too, how some writers write across a number of years; others don't. I need to explore her work.

As you know, being a professor is pretty time-consuming.

I'm in WEDNESDAY'S SHORT STORIES for the Long Haul!

Probably needless to say, considering, but this does NOT get old for me. Instead, I am constantly picking up new (to me) authors of short stories, both from your reviews and other comments. I have never heard of Marly Swick before, but she had me at the title. Will definitely check it out.

I finished the Crippen & Landru Lost Classics edition of Freeman Wills Crofts stories. I enjoyed it for the most part, but this is a classic example of someone who should not be read back to back. The stories (mostly quite short, as they appeared originally in daily newspapers) are just too similar. A man needs money desperately, either because he lost it gambling or some other way. He is either a lawyer who has "borrowed" it from a client, or the sole heir who will inherit were his aging relative only to die. He comes up with a "cunning plan" which is about as cunning as the plans on BLACK ADDER, and Insp. French quickly makes short work of his alibi and arrests him. If you like the inverted form more or less invented by R. Austin Freeman, these are not bad. There is one full length play (DURING THE NIGHT) adapted from one of his novels that is quite tedious, so I'd skip it.

Currently reading the third Tessa Hadley collection, BAD DREAMS and Other Stories. The first story is "The Abduction" about a 15 year old girl, left to her own devices on the summer holidays, picked up (hardly an "abduction" as most would describe it) by three older boys, who take her on an adventure of sorts into the adult world, one that she never regrets (we get the future perspective at the story's end). Well done.

My library has Swick's earlier collection, and I was able to get a copy of the second one from ABE for $3.00.

Patti, though I don’t do it every week, I enjoy reading the posts, comments and participating when I.have read stories. This week I chose to post on the graphic novel instead.

@ Jeff, that’s the problem with collections instead of anthologies.

Patti--is it starting to hang over your head?

As someone who keeps getting grandiose with his attempts at sustaining these roundelays, and who keeps having other demands on his time and energy (yesterday, instead of reading for the reviews, I spent a fair amount of time breaking up the tree limbs left in our driveway by the Public Service Electric & Gas electrician when he hooked up the new 110V line to our house in the latest hours of Monday night), all sympathies. (A small hacksaw and a large pruning shipper can be your friends. The larger logs put out between the sidewalk and street for anyone who wants them as firewood...probably better for an outside firepit, since some are a bit mossy.)

Todd Mason said...
This comment has been removed by the author.
3:16 PM

And thanks for the (re?)introduction to Marly Swick--her work sounds interesting, her name (a memorable one) rings a very faint bell...

Glad to keep it up as long as we're having fun with it. And it needn't be every week. Just when you have the time.
My Internet was off again last night, Todd. I have lost my power five times in the last six months. Something is rotten.
I always enjoy reading what all of you have said about collections or solo stories.

Infrastructure is rotten. But thank goodness "former Green" and soon to be former Deomocrat Sinema and coal magnate Manchin (is there some relevance to the comedy of humors surnames they both sport?) and their "clever" resistance to the better bill might not retard the passage of the infrastructure one...we'll see what percentage of the latter is eaten up by graft.

I am with George, I am in it for the long haul. And like Rick, I can't do it every week. But I find it the perfect motivator to regularly read short stories, and I enjoy them more and more.