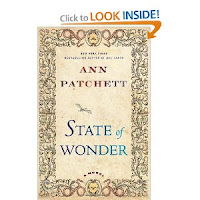 I cannot say I found this an entirely successful outing for one of my favorite writers. This is the story of a trip by a female scientist to a primitive part of the world. And the best part of the book is the evocation of that world. How alien it seems to us. And to Dr. Singh. Snakes, rats, cannibals, disease, drugs that are almost as difficult as the problems they solve. It's part of her assignment.

When a scientist for a pharmaceutical company disappears, his death is assumed, and another employee is sent to check on the details. The company is investigating the ability of a group of natives to both resist malaria and to have babies into their seventies. The second ability has the most cache for the company. Dr. Singh meets up with an early nemesis--the doctor who presided over her failure as a gynecologist. Now she is part of the research taking place in this remote place.

I found much of this book interesting, but I have to say the characters seemed more like voices for the moral quandary the doctor finds herself in than fully fleshed out characters. There is too much discussion of the morality of scientific research to fully engage the reader. And yet, I finished the book so it had to have something. Maybe you will find it too.
Yesterday I heard a discussion on THE NEW YORK TIMES BOOK REVIEW podcast about books that attempt to address societal ills to such a degree that they lose the advantage a novel has over non-fiction. Creating characters that touch the reader. There are a lot of non-fiction books that address problems. The problems in novels should be mostly character-based. This came from Thomas Mallon and after struggling through THE OVERSTORY (Powers) and this, I agree.

This sounds interesting, Patti. Still, I know what you mean about characters who aren't, well, people in and of themselves. The books I like best are the ones where I really feel the characters' personalities.

I am a great fan of many of her books, esp. Bel Canto and This is a Happy Marriage. This was the first time I felt her subject overwhelmed her characters.

Seems as if you've just read some sf here, Patti, if not the best nor most "core" example. Novels of ideas can indeed have their other aspects overwhelmed, and for those who like the Ayn Rands of the world, this is definitely a virtue rather than a bug in the system; many sf fans like to say to one another "SF is a literature of ideas" as if ideas aren't a part of all literature, that it's probably not possible to write a story of any length without putting forth some ideas about one's characters or their interactions with whatever and whomever they might do.

I got this book by Ann Patchett plus The Dutch House at the book sale, and am looking forward to reading them. It is good to get your opinion and be prepared more for ideas than characters. I kind of had that same feeling reading Bel Canto but it was just such a beautiful story that I did not care.

Character, plot, enjoyment can disappear beneath an avalanche of morality bluster, scientific detail, political lecture, and right vs. wrong tirades. Whenever possible, because I read for fun and relaxation, I avoid such books in fiction. That’s what non-fiction is for.

Loved THE DUTCH HOUSE but I listened to Tom Hanks read it. He was a great reader.