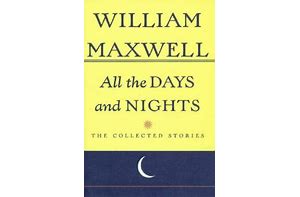 William Keepers Maxwell Jr. (August 16, 1908 – July 31, 2000) was an American editor, novelist, short story writer, essayist, children's author, and memoirist. He served as a fiction editor at The New Yorker from 1936 to 1975. An editor devoted to his writers, Maxwell became a legendary mentor and confidant to many of the most prominent authors of his day. Although best known as an editor, Maxwell was a highly respected and award-winning novelist and short story writer. His stature as a celebrated author has grown in the years following his death.

"The Pilgrimage" almost certainly is a story based on something experienced or something heard by Maxwell. It gets so much right about tired tourists on the road. The Ormsby's are an American couple touring France. On the way to Paris, they make a detour to find a restaurant that friends have told them about, saying "it was the best dinner they had in their life" How can the couple not have dinner at a place that specialized in truffles and also " deserts made from little balls of various ice cream in a beautiful basket of spun sugar with a spun-sugar bow."

They drive through village after village and finally come on a place that seems right except the menu has neither of the dishes they are seeking. And neither does another place on the town square. They are completely obsessed with having the things they were told about and act in the way Americans are always accused of acting.

This is a satirical story, of course, meant to point out the problems with tourists in foreign settings. Maxwell is a master of this sort of story. And I can't say enough about the quality of his novels. especially TIME WILL DARKEN IT, THE FOLDED LEAF and SO LONG, SEE YOU TOMORROW.

Sounds like the type of story I like. I have never read Maxwell. Maybe it's time to start.

Satire can be such a great form of commentary when it's done well. And this sounds like a really solid story with some characters who resonate. Glad you enjoyed it.

I've never read Maxwell's novels but have read one of his collections. This one sounds really good. I know what you mean about "tired tourists on the road" - been there, done that.

After the Jodi Taylor (reviewed by Rick Robinson today) and Howard Fast collections mentioned last time, I'm reading Robert Edward Eckels' (who is still with us, at 90) new Crippen & Landru collection, NEVER TRUST A PARTNER. Eckels wrote clever stories about a pair of con artists - Lowell, a talented painter who can copy any painter in any style so well that they pass for the real thing, and Lang, the con artist who can sell the forgeries (or make people think they are buying a forgery) to greedy collectors. It's best to space them out one per day.

The other collection I'm reading is I AM CRYING ALL INSIDE, Volume One of Clifford D. Simak's complete short stories. (I think there are about 9 - ? volumes.) Most are science fiction, of course, but "Gunsmoke Interlude" is a short western. So far I'm enjoying the book without being knocked out by it.

I see Maxwell has two Library of America volumes (which George probably has):

I believe all of his novels and about 20 of his stories are included.

He is certainly a favorite of mine.

I've read some of Maxwell's stories which led me to buy the LIBRARY OF AMERICA volumes of his work. Jeff Meyerson knows my buying habits well!

Haven't read Maxwell, but may try for a short story collection, as this sounds good.

Is SO LONG, SEE YOU TOMORROW about Lowell Thomas?

Now you have gotten me interested in trying this author. One of the Library of America volumes might be the way to go.

I've read but a scrap of Maxwell (and liked that), but nearly forty years in the editor's chair is certainly something...thanks for the pointer!

In her note about her story "Memphis", Bobbie Ann Mason mocks the basic Iowa MFA workshop/NEW YORKER story-ending (I don't have it in front of me, but a close paraphrase has the protagonist staring into the afternoon sky, parsing the ironies of the darkening blue)...which didn't stop her from selling the story with its more satisfying ending to write (at very least) to THE NEW YORKER, where it appeared in 1988. As opposed to my other story, by Carol Emshwiller, a similar challenge for her to get Just So, from THE MAGAZINE OF FANTASY AND SCIENCE FICTION in 1966.

So, another late entry coming!

Short Story Wednesday: Carol Emshwiller and Bobbie Ann Mason select favorite stories of their own, "But Soft, What Light..." and "Memphis" respectively