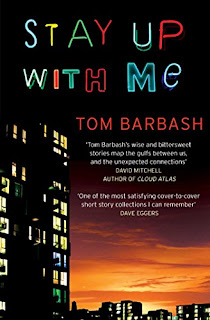 And you can read it here.

This is a story I have read many times. Part of its success is the terrific setting, Barbash came up with. It is balloon night on the upperwest side and the story takes place in an apartment on the street where the floats and balloons are prepared for the Macy's Thanksgiving Parade. I was in New York and very close to the street in question two years ago, but too timid to venture there alone. And from the story, it looks like the block is pretty well guarded.

Anyway, Timkin and his wife, Amy, give a party on this night every year and so do a lot of the people living on this street. People wander from party to party, getting drunker and drunker as they celebrate the preparations going on below.  This year however, Timkin is alone after a fight with his wife. He doesn't want anyone to know so the party goes on with him fielding questions about where Amy might be. He drifts in and out of his own party, sometimes watching it from the street. At one point a friend says that the only reason Amy married him was for the location of the apartment.

I guess for a lot of people this story would be like a Seinfeld episode (and there was one about this street) where nothing much happens. But to me, the author gets across both the pomposity, the ennui and the sadness of this man. We never know what his fight was about and yet we know very well.

Those 'nothing much happens' stories really can capture lifestyles, attitudes, and so on, Patti. For me, anyway, they are no less engaging, when they're done well, as are more 'action-packed' stories. Glad you enjoyed this one enough to read it more than once.

Don't know the author, but thanks for the link as I will read the story today. My sister in law used to take her kids when they were young (the older is now 44!) to the Upper West Side to see the balloons inflated the night before the Parade. I don't really remember it, other than the fact that it happened, but when we were young my father once took me and my brother to the actual Parade.

Haven't been excited by what I've been reading this week, and that includes most of the short stories too. I finished another Antonya Nelson collection (SOME FUN), but didn't enjoy it as much as her previous one. Jim Shepard's stories are somewhat uneven for me, as too often his historical ones read like an info dump of all the research he's done for them. He writes well and some are very good. Just started a Howard Fast collection (THE LAST SUPPER & Other Stories) that was offered as a cheap Kindle edition. (I found a library copy to download.) Too soon to tell on that one. I've read some of his mysteries (as by E. V. Cunningham), but not a lot of his vast output. He had an amazingly long career as his first book was published in 1933 when he was 18 and his last in 2000! I am a fan of SPARTACUS.

I read it. Pretty good story. Where is Amy?

I must be the only person in America who has never seen Steinfeld. References to it are common, so the assumption is everyone watched it.

Rick, I never saw an episode of Seinfeld either and my husband thinks he saw one show. So there are others out there who never watched Seinfeld.

That story does sound good, I am going over to read it.

I never get notifications if there are comments on my posts anymore and I forget to go back and look after the day I post it.
I have seen every episode of Seinfeld multiple times.