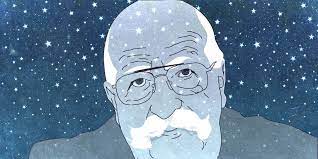 I have a friend who always cites Gene Wolfe as his favorite writer and I have been meaning to read a story by him for years. "The Little Stranger" is the story of an elderly woman, living alone, who hears her house moaning most nights. No one can locate the source of the problem. She writes about it to a now-dead friend and in fact, it is through her letters to him that we follow the story.

(This is a story hard to describe without giving things away) But I will try. The woman decides that if she were to add a small house to her property, the moaning might disappear. (You can never follow her logic in this tale) When a caravan breaks down outside her house, she strikes a deal with the family that if they build the house for her, they can stay on her land until they fix their caravan (good deal for her!)

The question is: is she a witch? The people in the caravan never come out ahead in their bargaining. But it's not clear that she does any real harm, even when  two children named Hank and Greta turn up. I enjoyed this story but it would not make me cite Wolfe as my favorite writer. It is a bit too circuitous and vague for my taste.

I like Gene Wolfe, too, but his stories can be confounding. His novels are NOT easy reads with plenty of complexity.

I've read a couple of his stories but nothing that stands out.

Currently reading: Antonya Nelson, FEMALE TROUBLE. I liked her first two collections but did not like the third (the third I read, not sure if it was actually her third), but I am liking this one more. Women having affairs, stories obviously taken at least in part from her childhood, stories about families, Wichita, Chicago, New Mexico (she lives in Las Cruces), there is something for most tastes. I liked "Goodfellows," which I would guess was based on life (if not hers than someone she knows). An 18 year old girl has her first job the summer before she is going off to college (from Wichita, Kansas) at an indie pizza place. Her co-workers, the guy she has a crush on, the feisty woman working the front, it's all vivid.

I read an intriguing review of Jim Shepard's new book (PHASE SIX) and put it on hold, then took out the first of his collections that was available (LOVE AND HYDROGEN). It's an odd mixture, with smaller stories mixed in with things about killing Reinhard Heydrich, John Ashcroft, the Creature from the Black Lagoon (from the creature's viewpoint), etc. I don't love it, but I like it enough to try another one.

I'm also reading the new MWA collection, WHEN A STRANGER COMES TO TOWN, edited by Michael Koryta, with stories by Michael Connelly, Joe Lansdale, S. A. Cosby, Alafair Burke ("2C," a Covid story) among others.

As you know I am a fan of Nelson and Shepard. Good writers in the collection.
I may try another one, George. I think that the Hansel and Gretel thing irked me.

I need to read me some Wolfe, too, altho gratuitous complexity has been known to drive me nuts.

A little joke on Wolfe's part there. Wolfe is a writer who, like Styron and Pynchon, is going to challenge the reader on several levels, in much if not most of his work. His most famous sequence of novels is about a professional torturer, for example, in a context where that's a noble profession.

I'm a big fan of Wolfe but more than once I have come away from one of his stories not sure of what I have just read. Some of his novelettes are more accessible. Such as The Death of Dr. Island or Seven American Nights.

--as ISFDB lays out the novella sequence:

I like the sound of this story but it is hard to tell, and I can get confused when reading short stories really easily. But you have gotten me interested in this writer. I will look for some of his stories or novellas, such as Steve suggested.