Short Story Wednesday: "Here We Are in Paradise" Tony Earley 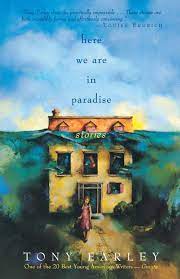 This is the title story from the first collection from Tony Earley. Most of the stories appeared in  literary journals. The couple in this story is the most ordinary of mid-twentieth century couples. The writing is plain, which well suits this couple.

The story begins with Vernon Jackson purchasing a flock of ducks to place on the pond on the land he has bought. His wife would prefer he puts a house there but instead it's a mobile home. He has no reason to think ducks something his wife wants and in fact, he seems to know little about her despite their long marriage. She is sick now and he thinks they can sit outside at night and watch their ducks, wings cut so they can't escape.

The story traces their meeting at a softball game where Vernon is the star pitcher. Pitching seems to be his one skill and it is enough to attract the young woman. But he has never bothered to get to know his wife, which she realizes late in their marriage. Yet, he treats her well, if without much thought, and it is hard to think ill of him.

It is hard not to think that many marriages were like this one. They are no children and this was a further impediment to closeness since they can't seem to talk about it. There is no doubt Vernon loves his wife and little doubt she does not love him but is stuck in a marriage that just happened to her.

I have read countless stories like this over the years. All of Earley's stories could be novels and yet I think he says all that he wants to say in under 8000 words. I also read his novel JIM, THE BOY, which was excellent.

This sounds like one of those quieter stories that still leaves a real impression, Patti. I'm glad you enjoyed it.

Yes, indeed, Margot. And a good lesson to write ordinary people with as simple language as possible.

I can't tell you how ...annoying this is. I was more than halfway through my post when the laptop decided that 7:52 am today was a good time to reboot. Arrrgh!

As I was saying, again. Don't know Earley but have heard the name. There really are an amazing number of people writing short stories these days. I know people always say that they don't sell, but then why are they being published? I know there are people like the couple in the story, but I cannot understand how you don't know your spouse in a long time marriage. We know people who got married and divorced within a couple of years, who clearly made the wrong decision from the start, but staying together for so long? Why? Inertia?

I did finish the three collections I was reading last time. I'm reading two more new to me authors. I discovered Rodrigues Ottolengui's FINAL PROOF (1898) in Barzun & Taylor's A CATALOGUE OF CRIME in the early '70s, bt it wasn't available. Now the Library Of Congress Crime Collection has made this early QUEEN'S QUORUM volume (the most important collections of short mystery stories) available. The informative introduction about [Benjamin] Rodrigues Ottolengui says that he was from a Sephardic Jewish family in Charleston, South Carolina, and followed his father's footsteps into dentistry, where he was a long time famous orthodontist. He also wrote several novels and a dozen or so stories about amateur sleuths Jack Barnes (a private eye) and Robert Leroy Mitchel, friends and friendly competitors who try to outdo each other and solve brainy mysteries. Holmes is mentioned, but these are set in Gilded Age New York City, a time and place that has always interested me. So far, they are quite entertaining.

I read about Nathan Englander, another writer whose name I knew but hadn't read, in Jennoifer Murphy's FIRST RESPONDER, where he is her writing instructor. Englander grew up in an Orthodox Jewish family on Long Island. His first collection is FOR THE RELIEF OF UNBEARABLE URGES, and so far it is about Orthodox and Hasidic Jews in Europe under the Nazis, which was not what I expected.

I've a few Tony Earley's stories and had the same reaction that you did. Clearly, a master of the short story.

Jeff, I see a book of FINAL PROOF by Ottolengui on Amazon for under $8. Is that the right one?

One of a gazillion authors I'm not familiar with. Gotta check him out.

I am not even sure that flock is the right word.

I'm another who is unfamiliar with Earley. The story sounds sad. Plus I don't hold with clipping wings, though I guess that's what he did with her. I may try the author Jeff mentioned, if I can find that book. A group of ducks on the water is a "paddling" but on the ground or in the air, just flock or bunch.

I have never heard of Tony Earley either. This sounds like a good story but a sad one. It is hard to imagine a marriage like that and yet I am sure there are many. And the cover is very nice.

Yes, that is the right book, Patti. I got a copy from the library.

And let us consider what you meant by That, Ms. Abbott...

Fiction, like all narrative art, lets us explore alternate lives, which might touch on ours without reflecting them...and other boilerplate that is nonetheless true as far as it goes...