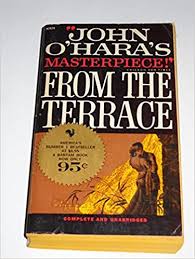 I have always thought I read a lot of John O'Hara as a kid until I looked at his list of publications. I may have only read FROM THE TERRACE, or was reading it when my father pitched it out the door. This action necessitated a late night retrieval because it was a library book. And I really can't believe my father had any idea about who O'Hara was or what the book was about. Maybe the cover scared him.

At any rate, I think I mostly read O'Hara short stories He published hundreds of them. But I did read a lot of novels by three other Johns as a teen: Steinbeck, Marquand and Dos Passos. As well as Sinclair Lewis, Thomas Wolfe, Willa Cather, Thomas Hardy, Jane Austen and Theodore Dreiser. No mysteries at all. I don't think I knew they existed then.  My mother had a few in our one tiny bookcase, but I was more attracted to the romances there.

Anyway this story is collected in the Library of America collection of a few years ago. It is a nine-page story. O'Hara wrote both very short and very long stories. It begins with a young man (Jamie) noticing a young woman crying in the street. He recognizes her and has a immediate desire to cover her up because her deep distress is like nakedness to him. People didn't often cry in the streets.

He looks for her at a swimming party that night (this is probably set in Gibbsville- a stand in for O'Hara's own hometown in PA) Nancy has begged off coming; she was supposed to bring 12 ears of corn, someone complains. A discussion takes place over how girls mature earlier than boys. How he shouldn't fall for her since although the same age, he was too immature for Nancy. "She needs someone who can take care of her," someone says.

But he looks for her again the next day at the club swimming pool and finds her. He is very attracted to her and watches as she climbs out of the pool to see where the swimsuit sticks to her body. (I had never thought of this as a "thing" before). The dialog between them is snappy.

Again there are references as to how he is not mature enough for her. He offers to marry her and she says he isn't even finished with college. The story ends with the lines.

"I don't want to have to wait that long," he said.

"We don't have to wait, for everything," she said.

Although only nine pages, you come away from the story feeling you know a lot about these two twenty-one year olds.  They come from the privileged class and I think that was the typical group O'Hara wrote about. He came from that class  (father was a doctor) although he always felt like an outsider apparently because he was Irish and Catholic. There are lots of phrases in the story that date it, but the story isn't dated at all. Something very like it is in The New Yorker most weeks.

I'm impressed with an author who can convey that much character and meaning within nine pages. That's not easy to do!

A discussion takes place over how girls mature earlier than boys. How he shouldn't fall for her since although the same age, he was too immature for Nancy. "She needs someone who can take care of her," someone says.

--You see how the one myth justifies the other--the permanent infantilization (through dependence and other means) of women in some contexts...and excuses taking "child brides"/robbing cradles (for those feeling the need of fig-leaf excuses).

He is very attracted to her and watches as she climbs out of the pool to see where the swimsuit sticks to her body. (I had never thought of this as a "thing" before).
--Well...given how relatively shapeless swim suits were in some early 20th C decades, and the general interest in body shapes particularly among the young and hormonal but never quite Not an interest usually is...

I think I first became aware of O'Hara because of the short-lived GIBBSVILLE tv series in the '70s, which probably happened because of the success of THE WALTONS in the season or so before. I've read a double-handful of his stories and one or two of his novels, but not too deeply in...you might remember that Bill Crider and particularly Ed Gorman were fans. I haven't read this one yet.

I have to wonder how racy the dust jacket had to be to freak your father out.

Or was the library's copy you had that Bantam paperback edition?

I wish I remembered. I think it was a fairly innocuous cover but perhaps the movie was out and getting publicity. We are talking about 58 years ago.

I love John O'Hara's short stories, too. O'Hara is an underrated writer and I need to read (and reread) more of work. Brilliant choice!

Good choice. When I finally discovered O'Hara's short stories in the '90s, I went through the big Gibbsville collection, then set out on a methodical search for all the other collections of stories he had published. Then I made as definitive a list as I could find (maybe 300 stories) and set out to find whichever I could. A bunch of his short early ones are not easily available, but I probably read over 200. I haven't read many of his novels (APPOINTMENT IN SAMARRA was one), though I do have the huge FROM THE TERRACE on my shelf.

I've read a lot so far this year, but almost exclusively short stories. In the first 12 days of the year I've read 41 stories - the Lawrence Block collection of Bernie Rhodenbarr stories, a few from JEWISH NOIR (ed. Kenneth Wishnia) and the rest from Otto Penzler's collection THE BIG BOOK OF ESPIONAGE. The first section is about World War I. After a few I moved on to the second, World War II, section. Yesterdya, I very much enjoyed Dan Fesperman's "The Courier" (originally in another Penzler collection, AGENTS OF TREACHERY, as was the next story). A man shot down over Switzerland (where pilots tried to bail if they were hit over Germany) is recruited to the OSS by Allen Dulles. His job as to find, basically, a patsy, someone who will (unknowingly) pass on false intelligence to the Germans escorting him across France to be exchanged and sent home. It's all told in flashback format from 1958. It is just very well done.

I then followed it with Olen Steinhauer's "You Know What's Going On." I like his writing very much and have enjoyed several of his spy novels, but this story didn't work for me at all. It's set in East Africa and Rome, told mostly backwards in almost MEMENTO fashion.

Just checked my paperback copy of FROM THE TERRACE. It was from 1984 (reprinted 1986) and claims "Soon toBe a Major Television Miniseries" on the cover. It wasn't. I did see the movie version with Paul Newman and Joanne Woodward, but don't remember it at all.

I will have an entry today...whenever I lie down (as I usually do to read--or look again at a text), Ninja the cat decides it's time for me to be a cat mattress and masseur...and if I touch a computer while she's lying on me, she usually stalks away in a jealous huff. This can slow the process.

FTT was a movie in 1960. Had no idea they were planning a miniseries but that was the time they loved miniseries.
Why do animals detest their people being on a phone or computer?

"You're not paying attention To Me!" Further evidence of our animal selves as well.

Njnja also has a PTSD-level skittishness beyond that of most cats that makes itself plain in her discomfort verging on terror when she sees Alice or me manipulating anything larger than a food/water bowl in her presence, and sometimes even the bowls. I'm not sure I want to know what instilled that, but I do wonder. (She was a pound cat when my parents adopted her, and we took her in when things went bad for them.)

That's some pretty impressive reading for a teen, even if you did miss out on O'Hara back then. O'Hara did have a reputation for writing heavy breathing sex scenes back then, and it wouldn't be surprising if any of the pb editions had fairly salacious covers. I have a h/c copy of FTT, and the cover is just white print on a blue background. It's also a bit heavy to be tossing around. My mother must have been a fan because we had several of his books in the house when I was a kid.

I'd read "Appointment in Samarra" and "Butterfield 8" in college, then decided about six years ago to read all of his novels, and I only have one left--"The Lockwood Concern". I'm also working on the stories, but very slowly. "How Old, How Young" is in the LOA collection, which I'm currently reading. It also contains "Over the River and Through the Wood",my favorite of the stories I've read so far.

What do you consider his best novel, MP.
THanks,Todd

I guess the conventional wisdom would award the title to "Appointment in Samarra", and from a literary standpoint that's hard to argue with. But literary quality in itself can't really explain how entertaining he is. Todd mentioned above that Bill Crider and Ed Gorman were fans, which I'd been unaware of, but it certainly makes sense because his best novels have an almost pulpy quality that makes him so much fun to read.Look for this in "A Rage to Live" and in his great Hollywood novel "The Big Laugh". And it shows up sporadically in some of his way too long novels like "From the Terrace" and "Ourselves To Know". But I haven't answered the question. I'll go with "A Rage to Live", which was vilified by critics when it appeared. It was also made into the best movie made from his work.

Just as an end note, O'Hara's short stories provide an entirely different (but equal) kind of pleasure from that provided by the novels.

Reading blog posts are bad for me. I never wanted to read John O'Hara and now I do. At least sample a novel and some short stories.

And I forgot to say that Jeff's comments about THE BIG BOOK OF ESPIONAGE have motivated me to get get that soon, too.

It used to be when people recommended books online, I put them on reserve at the library. But with that option not working well, I have never bought so many books!

At long last, and after my regular computer conked out...using Alice's Dell to finish up...