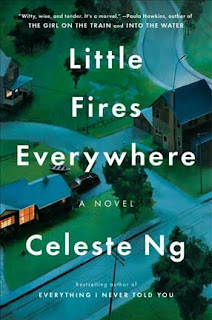 This was peculiar book for me. Although I read it very quickly, easily and with pleasure, it had many oddities. It wasn't until the book was half over, that its real topic emerged: the adoption of Asian babies by American couples. And the problems of surrogate mothers as well. And because the topic arises late, it leaves most of the characters lurching for their place. Characters I had begun to be interested in in the first half, barely surfaced in the second.

It is also a story of mothers and daughters. A major figure is identified mostly by her surname. Why?
And if the first half addresses privilege, the second half leaves this behind and hones in on other non-character based issues too often. It's as if, Ng becomes bored with her clever social satire and reaches for a deeper tone.

The plot mostly concerns the intersection of a self-satisfied Shaker Heights family with a single mother and her daughter. The single mother is an artist who begins to clean for the family. The daughter forms relationships with all of the family's kids. But as I said earlier, most of this goes out the window in the second half.

I kept thinking that if this book was reordered and told from the single mother's POV, it would have been a stronger story. But you can find lots of reviews who had no problem with the story. So maybe it's just me. Certainly it is a well-written, thoughtful book. Just a little short of memorable characters. Too many of them never come alive.

I see this is about to be a miniseries starring Reese Witherspoon.
Posted by pattinase (abbott) at 2:30 AM

It's certainly a timely topic, Patti, and interesting. I can see why you thought it worth reading, even if there things that didn't quite work for you.

Diane and her Book Club read LITTLE FIRES EVERYWHERE. There was some spirited debate about the book among the members.

Your comments about adoptions of Asian babies struck a chord. One of my cousins' youngest daughter was adopted from Korea. Years ago we heard comedian Judy Gold tell an amusing (and true) joke: "I saw something amazing the other day. I saw an Asian baby in Park Slope with two Asian parents."

Did you know there are dating sites for men who only want to go out with Asian women? I know it because another cousin's son has used one of them to hook up with his last two girlfriends. Since we heard this, we have been noticing how common (at least in New York) it is to see similar couples. Not saying there is anything wrong with any of it, just interested to note.

Well...some folks grouse, not altogether without merit, about others (mostly white men) with "yellow fever"...though one young woman I knew in DC who is Chinese-American was complaining about this, after having just broken up with her pale Caucasian boyfriend, to a gathering at her parents' house, where all her siblings were present, and all of them had pale Caucasian partners. And, certainly, the likes of "Cherry Blosssoms" and similar "matching" services from mid-century up through at least the 1990s were about putting east Asian women seeking American husbands together with usually Caucasian men here.

As someone who has dated women of various ethnicities, and been seriously involved with women of several, I can only say idealizing or fetishizing isn't too healthy...as most of us know...and there are all kinds of wonderful women in the world. Finding one who can put up with me is the trickier part...but I've been lucky.