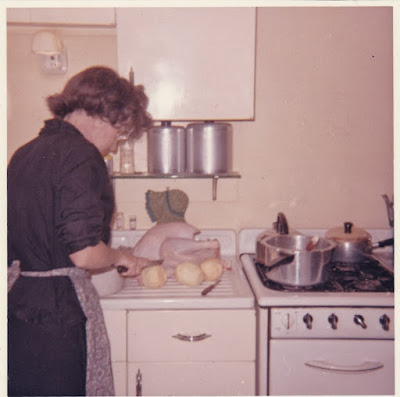 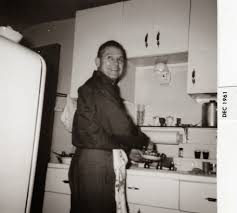 I don't know if you can get the idea from these first two photos just how small my childhood kitchen was. Wanna talk about counters, the only work areas were these two porcelain draining surfaces on each side of the sink. Across the room was the fridge and at the end of the room was a table and chairs. I doubt the room was larger than six by ten. You can see all the cabinets in the picture with my Dad and you can see how little preparation space there is as Mom tries to make Thanksgiving dinner. Want a 18 pound turkey? Well, it won't fit in this oven.  Families cooked dinner every night in those days. And now that we go out to eat a lot more, we have enough counters and then some. Somehow ours 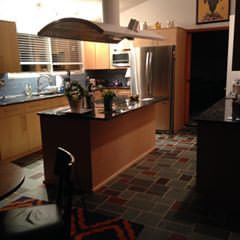 all get used most nights. Cleaning up that childhood kitchen was easy. Now it takes me at least 30 minutes.

My mother's dinners didn't require much preparation or cleanup. The only spices I remember were salt, pepper, cinnamon and nutmeg. Potatoes got washed and thrown in the oven with the meat. Or boiled in  pan. The vegetables were frozen most of the year.  No sauces or gravies of any kind except at Thanksgiving.

Now our first house as the Abbotts had a kitchen no bigger than this one. The next two, much bigger. And when I look at remodels of those row houses in Philly, they have gone open concept to at least give the illusion of more space.  The less we cook, the bigger our kitchens get.

Do you remember your childhood kitchen? Was it different from your kitchen today.

Kitchens. Essentially no memory of the Alaska kitchens. I best remember the West Peabody, MA kitchen with the orange wallpaper with the silver maze pattern, and the Enfield, CT kitchen with a kind of ugly yellow rubbery carpet. Surprisingly faint memory of the Londonderry, NH kitchen. Even the bungalow in Kailua, HI had a fairly large kitchen/dining area (small if one considered the dining area as a separate room).

Alice's house, at a century old, is easily the oldest house I've lived in. The kitchen was expanded/added less than twenty years ago. "Stone" tile floor.

It might be because I first began learning to cook in Connecticut (1973-76), and did most of my youthful cooking in Hawaii (1979-83 in my parents' house). My mother wasn't as taxed in NH as she had been in CT, and most of my teen years were in Hawaii.

I didn't learn how to cook anything other than veal parmigiana in that childhood kitchen. It was too small to hover near the cook to learn. I don't remember what the walls were like at all. THe floor was linoleum, I think. The table was so wedged in you had to let the first two get in before you did. We ate all our meals there despite having a dining room. That was for Sundays, holidays and very warm weather.

I love those pictures! Your current kitchen, especially the island, reminds me a lot of my parents' last house in Arizona.

We moved to Brooklyn when I was 9. I have no detailed memory of the kitchen we had in the apartment in Queens before that, though I don't think it was very big. In Brooklyn, it was something else. We rented the first floor of a two family house (the landlords lived upstairs) and it was big - three bedrooms (a huge one for my parents, smaller one for me and my brother, slightly smaller one for my sisters), only one bathroom (with a bathtub and a walk-in shower), kitchen in what we considered the 'back' of the house. In front of that was a large dining room (used mostly on Sundays or when entertaining), a living room (mostly just a walk-through unless my parents were entertaining), and a front room with the television (my parents had one in their bedroom too), small piano, etc. where we spent most of our nights.

To get back to your question, the kitchen was BIG. We had a large round table (with a lazy susan top) where we ate breakfast and dinners when my father worked late (most nights), a washer and dryer, big refrigerator and stove, etc. Plus there was a full attached pantry with lots of storage space.

Thanks for sharing those kitchens, Patti. The kitchen is such a central part of family life for a lot of people, isn't it?

I grew up in a three-bedroom ranch style house. Just 1250 square feet. The kitchen was small by today's standards, yet my Mom and Dad managed to fit all five kids into that space. We had GE appliances: stove and refrigerator. No dishwasher! My Dad said, "I have five kids to wash and dry dishes!"

In the Summer, we'd eat outside in the backyard on our picnic table. It was a fun time!

Not for our family, Margot. Too small. We spent all of our time in the living room, watching TV, which my brother, mother and me were addicted to. My father was usually working.
That sounds like a big place, Jeff. Did it have a big yard? Ours was the size of a blanket in the back, a slighter larger front lawn.

We didn't. There was a small front lawn. In the back was a somewhat larger garden, but the landlord always seemed to have one of his cars out there so he could work on it. We basically had an alley between houses. It was wide enough (if you were a good driver, and this was really excellent training for me) to drive down the alley and into the garage (my father had a space for his car - a Buick Electra 225, which was like driving a tank) and, much trickier, to back out and down the alley. There was a small curb by our neighbor's house you could use as a check to make sure the car was straight, as you didn't want to get too near the wall and scrape it.

The house also had a partly finished basement, with storage rooms for each apartment. That is where I discovered the Oz books, as the landlord's youngest daughter had a complete set of the illustrated hardbacks, which I read one after the other.

Our garage was under the house and in the back alley. My father drove into the basement once. Never lived that down. My kids loved the OZ books but I never read them as a kid.

I grew up in southern California, so it was a ranch style house, two bedrooms, one bath, living room, dining room, kitchen. The kitchen was U-shaped, pretty good sized, four burner stove (gas) had a griddle in the center. Good sized refrigerator, but no place to eat. The dining room was in use for every meal.

Ive had very small kitchens in rental apartments over the years, larger in my condo, and a very large one in our current house, with a huge island with the cook top inset. Plus an eating nook, plus a dining room. Big house, big kitchen.

Surprisingly how many houses don't have eating space in the kitchen. Don't get that at all. We lived in two of them and it was very annoying to clean up a room away.

The open, carpeted or hardwood space of a dining room or what-have-you looks more impressive in an empty apartment or townhouse than does the appliance-crowded tiled kitchen area.

I think most houses of any size, built or remodeled since midcentury, have at least space for a nook or small tables near windows, but I might be wrong. All those I've lived in have had.

I never thought of our kitchen as small, but we did not have much counter space. We usually ate in the kitchen and the washer and dryer were in the kitchen. It was tiny house, two bedrooms, kitchen and living room. We had the dining room table in the living room; the two sides folded down and we could pull it out on some occasions. Large back yard though and a decent front yard. I lived there until I left for college and my parents lived there for another 15 years, so I remember it quite well. It is fun to remember those things.