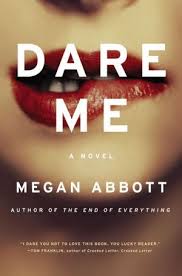 Dare Me
Based on the acclaimed novel by Megan Abbott, who serves as writer and executive producer along with Gina Fattore, the drama is an unflinching exploration of volatile female friendships, jealousy, loyalty and the dynamics of power in a small Midwestern town. Peering behind the all-American façade, the series dives into the cutthroat world of competitive high school cheerleading, following the fraught relationship between two best friends after a new coach arrives to bring their team to prominence. Part coming-of-age story, part small-town drama, part murder mystery, Dare Me exposes the physical and psychological extremes that some young women are willing to endure in order to get ahead. The drama is from Universal Cable Productions in association with Film 44. Peter Berg and Michael Lombardo of Film 44 executive produce along with Sarah Condon and Karen Rosenfelt.
Posted by pattinase (abbott) at 10:35 AM

Wonderful. I wonder what platform it will be on, if picked up?

Great. I can definitely see it on television.

This is my testimony on how i was cured by Dr Idahosa, i am Juliet Pius i had Hiv Disease for 2years and i tried all means to treat my self but no doctor could help me cure the Hiv permanently i even took some drugs that was prescribe to me by many doctors but none could work i felt it was going to stay permanently since i could not cure my self until one day i was browsing through the internet i saw different testimony with different people on how they were cured from the disease by Dr Idahosa i never wanted to try because i knew anything done with internet were always scam but because of the pain i have i gave it a try and email him and he replied back i told him my problem he prepared a portion and send it to me which he instructed i should take morning and night i did it constantly and suddenly i started having change in me, so my brothers and sisters am glad to say Dr Idahosa has cured me from my Hiv disease he can cure any disease or sickness if you give him a try, you can email him today at; (dridahosasolutioncenter@gmail.com) or whatssap him +2348134261542 he is a nice man.