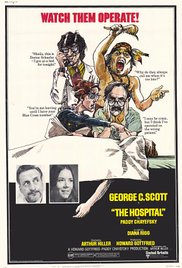 George C Scott and Diana Riggs starred in this very black look at a city hospital. Arthur Hiller directed the Paddy Chayefsky script in 1971. T hey don't make this sort of movie anymore. Life is too dark to joke about now.George C. Scott was such a figure then. Has anyone heard of him now?I guess he's most remembered for PATTON, my least favorite of his films. Biopics seldom work for me because they are never nuanced enough.
Posted by pattinase (abbott) at 7:00 AM

I always think of Scott in Patton, Patti, rather than this one. Thanks for the reminder.

I like George C. Scott and somehow I missed HOSPITAL. I need to track down a copy.

Oh, you need to see it, George.

I first saw Scott live in 1962. They took our class to Central Park to see the first-ever Shakespeare in the Park production, George C. Scott in THE MERCHANT OF VENICE. He made an impression.

More memorable to me were: ANATOMY OF A MURDER, EAST SIDE/WEST SIDE on television (filmed in New York in gritty black & white), DR. STRANGELOVE, and Paul Schrader's intense HARDCORE.

Loved this movie when I saw it back in the old days. Agree with Jeff on the other movies he mentioned. Great stuff.

They Might Be Giants -- Scott as a character who believes he is Sherlock Holmes, costarring Joanne Woodward -- might be my favorite; I also enjoyed The List of Adrian Messenger. Yeah, I like the off-beat flics.

I remember him from several movies I've liked, Patton, of course. And The Changeling.

Let's not forget THE HUSTLER.

Was trying to remember THEY MIGHT BE GIANTS. I don't remember him in THE HUSTLER. I just remember Newman and Gleason.

This film is partly responsible for my loathing of hospitals and white coat syndrome. I loved him in THEY MIGHT BE GIANTS.

Patti – I am really glad you wrote about this film. It is my favorite of Scott’s, although I’ve liked him in almost everything. (I wonder if anyone remembers him in ISLANDS IN THE STREAM?) HOSPITAL was great, and it had the benefit of co-starring Diana Rigg, a wonderful actress who could also handle all that Chayefsky dialogue. In fact the whole cast was great, including Bernard Hughes in two roles – as Rigg’s father, and as a harried surgeon.