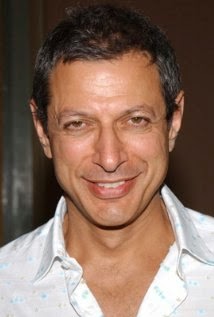 A few weeks ago I saw LE WEEKEND, a film about a older British couple on a weekend in Paris,  and was amused by Jeff Goldblum's performance. He was playing a character very like himself, but who does it better? He was the smart narcissist that really had a heart beneath all the pomp. He managed to seem completely absorbed by both the person across from him and himself, seemingly flirting with both. It's as if the person across from him functions as a mirror .

He also played himself equally well in THE GRAND BUDAPEST HOTEL

A lot of actors used to play themselves (Cary Grant, John Wayne, Clark Gable) but it is rarer today.

My favorite Goldblum performances are in BETWEEN THE LINES, THE FLY, THE BIG CHILL and his time spend on the TV show TEN SPEED AND BROWN SHOES.

What actors play themselves to perfection?
Posted by pattinase (abbott) at 6:30 AM

I liked Goldblum in a few films but not so much in THE FLY. Other actors might include Gene Hackman (MISSISSIPPI BURNING) and Anthony Hopkins (AMISTAD). I think Jack Nicholson does the smug look better than most actors.

I liked Goldblum as himself in The Big Chill. And Jimmy Smits plays himself quite well both in The West Wing and earlier in L.A. Law, in my opinion.

Goldblum was great in INDEPENDENCE DAY. Tom Selleck is always Tom Selleck no matter what role he plays.

I've seen him in a number of films and always liked him. He has a certain sameness about his characters but it fits the story lines.

Barbra Streisand apparently plays a nicer version of herself in most roles; Bette Midler often in the last decade or so a nastier version, I gather (not knowing these people makes the judgment a bit difficult...there's that often-quoted Cary Grant line about how he'd certainly like to be "Cary Grant" as well). But such one-noteness often suggests the limits of acting ability, though of course typecasting is at least as much a factor (Susie Essman is probably never going to get to play the doting grandmother nor the charmingly seductive middle-aged woman).

Goldblum is usually a welcome presence for me, and many of the items cited (and the likes of LAW AND ORDER: CRIMINAL INTENT, wherein he and Saffron Burrows were probably the tallest cop team ever, at least on US tv) were certainly elevated (as much as they could be...INDEPENDENCE DAY and JURASSIC PARK weren't going to be improved much by anything or anyone)...

Jackie has always been a huge (no pun) Goldblum fan and will watch him in anything. And of course INDEPENDENCE DAY is one of her favorite movies that she will watch any time it pops up, which is often.

The one I wasn't expecting that turned out to be something I liked was THE TALL GUY. Who knew Emma Thompson could be funnt back then?

Another worth checking out is BETWEEN THE LINES - John Heard, Lindsay Crouse, Goldblum, Bruno Kirby.

Goldblum was hardly himself in THE FLY and certainly not himself in EARTH GIRLS ARE EASY. I dislike that term "playing himself" or "playing herself"-- especially when applied to actors who really know how to act.

I guess it's a shorthand way to describe a certain relaxed unaffecetd (sometimes monotonous, to me) style of acting, but it's still acting. Most of the time.

A lot of sit com actors "play themselves" and have no clue how to act. All they do is tell jokes throughout the entire show. It's not acting at all. Jerry Seinfeld wasn't acting on his show. Ever.

The perfect example of this style of acting is Tom Cruise. He's exactly the same in almost everything he does. Now that's he's middle-aged he's finally tapping into some character acting and he is sometimes rather surprising. Like in Magnolia and Rock of Ages when he wasn't "himself" at all.

I think we're really talking about an actor's "persona" rather than who they are off-screen. Spencer Tracy always played the gruff but kind-hearted man who was "comfortable in his own skin" to perfection. Apparently he was nothing like that in his actual life. I guess we project what type we expect an actor to be on to them and are then pleased or displeased by their conforming (or not) to that vision.

Ben Affleck seems to play himself pretty often, never better than in SHAKESPEARE IN LOVE, playing a vain actor (natch).

In re: Emma Thompson--well, I certainly knew she could be funny...I first became aware of her due to her comedy/dance (not a common format) series THOMPSON, imported for PBS stations.

TOM CRUISE AND BEN AFLECK, YES.
Spencer was one complicated man.
Yes, I like him to play the character he usually plays because he does it well. Nobody does it better.

Many said John Wayne played himself, but I believe he just played the same character over and over, at least in the westerns.

Todd, I disagree with your judgement of JURASSIC PARK, it's a film I enjoyed for various reasons. Several of them: Jeff Goldblum, Sam Neill, Bob Peck and Martin Ferrero. I also have good memories of watching it with my elderly mother who didn't like violence in any form and had to be convinced that the dinosaurs were NOT REAL in any way. We covered her eyes for the tethered goat part. When the slimy sleazy lawyer, played to perfection by the very underrated Martin Ferrero gets his while cowering in the toilet, I told my mom: "Don't worry - it's only the lawyer." Even she appreciated that one. HA.

I love Jeff Goldblum. There are many actors who 'play themselves' but for the life of me I can't think of any at the moment beyond those mentioned in other comments. Wait, wait, Jean Dujardin, maybe. Robert DeNiro, yes, yes, I know everyone will disagree, but he has that thuggish thing going on all the time no matter what he plays. He is incapable of playing anything else. A very one note actor in my book.

It's incorrect to say John Wayne played himself. Look at his B movies and then look at his work from 1939 on and you'll see a mature, sure stage presence. The could run the gamut of emotions and he could act.