Forgotten TV: THE 5:48 on ALFRED HITCHCOCK PRESENTS and on THREE BY CHEEVER on PBS 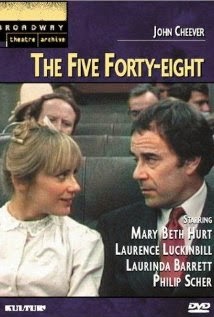 This classic Cheever story has been done on TV at least twice. It was an episode of ALFRED HITCHCOCK PRESENTS in the 1960s and then as part of THREE BY CHEEVER on PBS in 1979. The story is good enough that it could easily be made again.

A callous executive has an affair with his secretary. He knows she's a bit unstable but when he cruely dumps her, he finds out just how unstable when she shows up on the 5:48, his train back to suburbia. Zachary Scott and Phyllis Thaxter starred in the AH version. Here it is Laurence Luckinbill and Mary Beth Hurt.

Cheever's story is as dark as any noir. I tried to find a clip but was unable to do. HULU has all the AHs for free if you want to look for it.

Although my favorite Cheever adaptation remains THE SWIMMER with Burt Lancaster, THE 5:48 is an excellent runnerup.

***John informs us in the comments, that this episode of AHP is from Season Six and probably can be found on you tube, not Hulu.
Posted by pattinase (abbott) at 6:30 AM

Patti - Oh, I loved the Alfred Hitchcock series - thanks for the reminder :-)

I saw THE 5:48 on PBS when it was first broadcast in 1978. It was terrific! Some TV shows you forget right away and others stay with you forever. THE 5:48 is one of those forever episodes for me.

I saw most of the Alfred Hitchcock stuff later so probably saw this. I don't remember.

I've seen the Hitchcock episode with Phyllis Thaxter turning in in one of her all time best performances. It's very modern acting for 1960s TV.

And a slight correction: Hulu has *most* of the Hitchcock episodes, not all. Only 148 episodes of the first four seasons. "The Five Forty-Eight" was from season six and is not at Hulu. YouTube is the best source for Hitchcock TV episodes, especially the later seasons and the episodes from when the series changed its name to THE AH HOUR.

Todd Mason said...
This comment has been removed by the author.
8:36 PM

So, clearly, the two anthology series were willing to turn to the merest hacks for this job...Charlotte Armstrong and Terence McNally...(that's a joke, folks, as Kenny Delmar might note today). James Ivory might not've done too much US tv, either.

Saw McNally but did not catch Armstrong!

Or, even, Terrence McN. And Ivory apparently didn't do Any other US tv.

Too many loose threads and a plot leading to nowhere. Noticed that many 30-minute Hitchcock plays centered around mediocre writing and anticlimactic plots, sort of 22 minutes of thunder and lightning and then it rains at the end. However the acting was usually good and Alfie's opens and closes most amusing.

The Hitchcock version was on the other night. Why PBS doesn't show "3 from Cheever" every five years of so is beyond me. Not one library in my radius has either the VHS or the disc.

I love all the AH shows! I didn't realize The 5:48 was a Cheever story! Recently saw a dramatization of "The Lottery" -- chillingly good.