A Guest Blog by Nate Southard 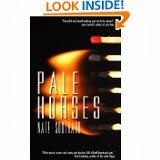 Hello.  My name’s Nate.  If any of you have heard of me, it’s probably as a horror author.  For the last five years, I’ve been writing scary stories.  I’ve had a few novels published, a couple of short story collections, and I have one of the smoother bald heads in the genre.  That last part may be up for debate, though I’m not sure why anyone would want to discuss the issue.  I’m not even sure why I brought it up.

Recently, Snubnose Press published my first crime novel, Pale Horses.  It’s probably the best book I’ve ever written, the story of an Indiana County Sheriff struggling to hide the beginning stages of Alzheimer’s Disease as he tries to solve a murder, deal with the county’s growing meth problem, and quell the simmering violence brought about by a hot-headed deputy and a war vet suffering from PTSD.

Strangely, as people have asked me about the novel in the weeks since its release, one question keeps popping up over and over again.  It takes different forms, but it almost always come up.  “So, are you done with horror?”  “Are you going back to horror after this?”  “Why did you decide to leave horror for crime?”  I’ve given different answers to different people, explaining that this was just a story I wanted to tell or that I wanted to test the waters.  The more I think about it, however, the less I think any of those answers are correct.  The more I think about it, the more the answer becomes clear…

Honestly, I just don’t consider the horror and crime genres to be different.

Don’t get me wrong, I’m not going to call Stephen King’s Carrie or Scott Smith’s The Ruins masterpieces of noir or anything like that.  Rather, I think both genres, when at their best, deal with the same issues and provide the same escapist release.  At the heart of it all, both genres deal with humanity and how a person may or may not cope with circumstances far beyond their control.  Both serve up the emotions of dread and excitement to the reader.  Maybe one does it with a maggot-filled claw and the other a cocked pistol, but I think those who enjoy either genre do so for similar reasons.

Some of my favorite authors illustrate the similarities between the genres perfectly.  Jack Ketchum, author of The Girl Next Door and Off Season has written only a handful of stories with any supernatural elements, but he’s considered an astounding horror author.  The majority of his novels, especially great reads like The Lost, Old Flames, and Hide and Seek, are pretty straight crime and noir tales.  The monsters are all deeply human, but Ketchum horrifies us by giving us a deeper peek into what makes them tick.

Gillian Flynn has been on everyone’s radar for a few years now, and she’s rightfully considered a master of the crime thriller.  In my eyes, however, Sharp Objects is hands down the best horror novel of the last decade.  The final two chapters still send chills down my spine.  Even thinking about them now gives me the goose shivers. Ken Bruen’s American Skin?  Another amazing horror novel.  In that novel, we meet the Tammy Wynette-obsessed Dade, easily one of the most fearsome monstrosities to land on the page in some time.

Let’s not forget Jim Thompson’s The Killer Inside Me.  That novel is a master class in establishing dread and slowly turning it up over the course of a narrative.  The slow unraveling of Lou Ford’s sanity almost echoes the slow unraveling of sanity we find in the best of H.P. Lovecraft’s work.  Is there some cosmic Elder God involved?  No.  There’s just a crazed sheriff’s deputy slowly destroying everything around him.

Look…maybe you’re a crime fan who thinks horror is where all the weirdo kids play.  Maybe you’re a horror fan who believes a story without a MONSTER monster isn’t worth reading.  Let me assure you, our pet genres are a lot closer than they appear.  Check out some of the titles I mentioned.  You might be surprised.  They’re all dark tales.  And the dark, after all, is a sweet, terrible place.

Good luck with it. The plot sounds right up my alley.

Patti - Thanks for hosting Nat.

Nat - YOu make a good point that both horror and crime fiction deal with human darkness. They look at it from different perspectives, but in some ways, they really are similar. I wish you succes.

I think I have seen your horror work. Dabble a bit myself in that area. Luck with your first crime novel!

Has anyone actually argued that suspense fiction and horror fiction aren't rather similar in structure and effect...with the difference being mostly in the realistic/fantastic approach? Ah, well.

There's no lack of people, aside from "Ketchum" and King and the others you mention, who write both horror and suspense and other sorts of crime fiction. David Morrell to Robert Bloch to Shirley Jackson to Kate Wilhelm to Barry Malzberg to John Collier to Patricia Highsmith to Kathe Koja. I'm not sure who these boundary-keepers who are pestering are, but I'm not sure you should be wasting time with them. And certainly horror doesn't require a monster.