My grandparents' brush with crime. 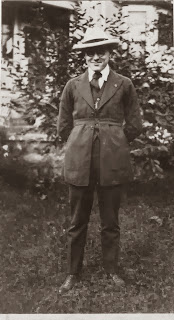 My grandparents lived at Oak Terrace Country Club from about 1941 to 1953. My grandfather managed the facility for my Grandmother's childhood friend and her husband, The Wingels. It had a golf course, tennis courts, swimming pool, restaurant and rooms at the top of the building for several people who needed to golf every day, I guess. (The Wingels have their own crime story too). My grandparents lived there too.

On a night in 1947, four armed masked gunmen broke into the Club and trussed the three women and seven men on site with belts and neckties--I guess they did not expect such a crowd.
(You can read the full article above).

Several articles at the time referred to the robbers as gentlemen because they allowed my grandfather to take his heart medication before robbing them. They locked all ten of the residents in the room where the safe was before making their getaway. I doubt $7700 was what they expected to take in, but maybe in 1947 it wasn't as meager as it seems. They were never caught. But the ten people played bridge at a table  left in the room until a waiter let them out the next day. The bottom picture is my grandmother in the room they lived in for all those years. But she never had to cook a meal!

Have you had a brush with crime?

A few years ago someone broke into my locker at the Aquatic Fitness Center and stole my wallet. And a year later, someone broke the window in my van and stole my Owner's Manual from the glove box. I'm happy I haven't had any brushes with Real Crime. Friends have had their cars stolen and break-ins in their homes.

Friends and relations, yes; us, no.

Jackie once left her school keys in the door and they were stolen so she called in this kid she had befriended - after throwing away some Chinese food he had delivered to the school - who was a drug runner for an older gang. He got her keys back for her.

My in-laws were burgled but it turned out to be the super of their building. A good friend came home and found a guy in his apartment. Fortunately he just left and wasn't armed. Another friend's car was stolen when she and Jackie were in a restaurant eating dinner. Several months later it suddenly turned up on the street in the same neighborhood.

When my parents first moved to California my mother and sister were arrested by an over zealous store security woman who saw them take a couple of candies from an open bin!

My brother once got arrested for selling t-shirts outside a concert at Madison Square Garden. My sister's next door neighbor got murdered when she lived in L.A.

In 1982-ish, I was sharing a small house with a roommate on Normandie Avenue between Sunset and Fountain in Hollywood. I came home from work one day and we'd been robbed. I always thought it must have been kids because the thieves took cheap but flashy things (such as an old stationery tin that I used to keep cotton balls in and my manicure set), but left behind the roughly $250 worth of change I had accumulated in the change jar in full sight by the bedroom door. What still hurts after all these years is that they took my jewelry box--which, other than my high school ring, contained nothing if great value, but everything if sentimental value, including a flower brooch that belonged to my grandmother (the only thing I had of hers when she died since she had so many grandchildren we all got one small thing apiece), a monogrammed watch my mom gave my dad for his 21st birthday, and a ring my other grandmother gave me for my 10th birthday. All those years I lived in the L.A. area, that was my only experience with crime.

Sad, Deb. Megan was robbed in Manhattan and they took a lot of sentimental stuff too . The guy hung down on a rope in a shaft to kick in the window. She was a student then and lost her computer as well.
Jeff-I think your luck is bound to run out since it's all around you!

My maternal grandfather was apparently murdered, along with several other miners, in an engineered cave-in by someone who envied his supervisor's job.

My uncle, a cop, his son and namesake, was definitely murdered in a bar some years later.

I remember George's story of the guy who stole the Owner's Manual from his car. Bizarre.

Downloading a manual can be expensive but spending time in jail and paying a fine, more so.
Someone stole the side mirrors from our Subaru once. Someone broke into our car and stole my purse
I've had my wallet stolen twice at work.

Actually I did have a six month crime story. I guy was making a u-turn behind our building and drove into the side of my parked car. (Later he was to claim his dog had jumped on him.) Rather than letting me know he backed up and drove away,. but luckily a guy riding by on a bike saw it and got the license plate number.

It turned out to be registered to a person around the corner from us but we got no satisfaction. Seems it was the owner's grandson. Eventually I had to go to small claims court where they finally sent a lawyer with documents proving the registered owner was dead, so therefore I couldn't sue him.

All I was trying to go was get the information and finally after six months got their insurance info and it was settled, which they could have done day one if the guy had given me the information instead of running away.

I've been robbed at gunpoint, assaulted by a group, burglarized, threatened with a bat, but I kind of chalk it all up to karma. I've done some pretty lousy things in my past. I'm trying to make up for it.

The only brush with "crime" I've had was when petty thieves, on two occasions, stole my holdall containing a pair of sneakers and a folding umbrella, and a wallet with money equivalent of a dollar in it. I keep all my money in my pocket.

I've had a couple of cars stolen but that's all. While a student at Eastern Michigan in the late sixties I lived a few doors down from John Norman Collins who murdered 6 young girls.

Many years ago we attended a party off Central Square in Cambridge, MA, and had to park several blocks away. We walked back to the car in the dark around midnight. We found out the next day that two houses down from where the party was, someone had killed a man, smashing his head in with a cement block -- at about the same time we were walking by.

A woman living three houses down from us was shot and killed one night by her estranged boyfriend (who had just been released from jail). The killer then ran to the driveway across from our house and killed himself.

Shortly after we were married an were working with the Massachusetts Division of Youth Services, some of the kids we were working with robbed the house, taking mainly inherited jewelry, some of which ended up in the bottom of a canal and rest was returned to us when the fence they used was arrested.

I was jailed once for paying a traffic ticket. Go figure.

I'm trying to blot the memory of it from my mind. I still wake up in a cold sweat some nights when it invades my dreams. It's tough to talk about, but here goes: About 25 years ago some slimeball stole the windshield wipers from my pickup truck. I'm sorry, I cn go on...

I was so shaken I misspelled can't.

Lucky if that;s the worst of it.

I got popped for misdemeanor possession of a joint back in 1970, but was sent to a drug counseling guy who just laughed and told the court I'd learned my lesson (ha). I ended up just paying a small fine, I think $50. As for crime against me, some kids broke into my garage and took a couple of tools once. I was glad to go to Sears and buy brand new ones.

… and once again I close out the comments ...

My brother got caught in a friend's car with a joint in the glove compartment on the way to Woodstock. That little peccadillo came back to haunt him more than once.

I used to live across the street and moved to my current rental ten years ago. Months ago there was a break-in and an attempted murder in the very same apartment I used to live in. Everyone on that side of the street was evacuated by a swat team in the middle of the night. I slept through the whole thing. Go figure.

When I was a teenager I was accosted on the street after a dance (I was with a small group of friends but for whatever reason I was singled out) by a guy with a baseball bat. Luckily my friend David caught the bat on it's upward swing and took part of the blow on his arm. He very likely saved my life.