How I Became a Published Author: Dana King 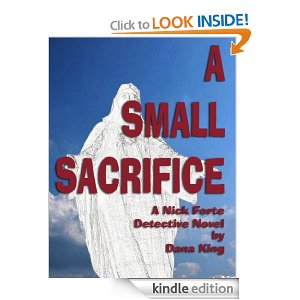 When Patti graciously offered me a chance to flog A Small Sacrifice, my first question was, “What would you like me to write about?”

Her reply: How about how you evolved into a published author?

Which is, actually, a pretty good story, with one caveat: what worked for me almost certainly will not work for you. It’s not because I’m irrationally talented and my deathless, unique prose transcends the boundaries that bind mere mortals. Uh-uh. I am, quite possibly, the luckiest SOB ever to earn a contract.

I thought the series as envisioned had a low ceiling, anyway, so I re-tooled the main character and supporting cast while waiting for the small, but highly respected press. (This is the one piece of advice that applies to everyone: keep moving. Write the second book while the first is making the rounds. Then the third, if necessary. Someone may ask if you have anything else like this, and you don’t want to have to say, “I will in a year or so.”) The agent and I disagreed on the new direction, which was much harder-edged than the book she had signed on for, and we parted amicably.

I found another agent. She circulated the second book to even more encouraging rejections. (My personal favorite: “Too good for a paperback original, not good enough for a hardcover series.” My first thought: “Make me an offer on a paperback original. The amount of pride I don’t have may shock you.”)

By the time we gave up on this one I had four Nick Forte PI stories in the proverbial drawer and decided to write something else. The agent said it was good, well-written, and she wouldn’t represent it because Italian mob fiction was dead, and that I should have checked with her first. This arrangement did not dissolve as amicably as did the first. I’ll accept much of the blame, as I should have clarified beforehand what she was, and was not, willing to represent. (Another piece of advice everyone can probably use.)

So I did what anyone would do in such a situation. I quit.

At least I tried. Tireless supporter of crime fiction Declan Burke read my kiss-off blog post and recruited a posse of people to urge me to reconsider. Anyone weak-willed enough to quit is weak-willed enough to be talked out of it, so I started a new series. I resolved to write only for myself and whoever else might like to read it; no more chasing contracts. I self-published the mob book for Kindle, as Wild Bill. It sold well into the dozens.

I started a new series, about cops in a small, decaying Western Pennsylvania town. Around this time I interviewed the Dean of Mob Fiction, Charlie Stella. Charlie asked to see my writing, so I sent him Wild Bill, with some trepidation, because you don’t tug on Superman’s cape, you don’t spit into the wind, and you don’t even think about trying to bullshit Charlie Stella about mob fiction. He wrote an enthusiastic review, so I sent him the first book in the new series, which I had just made available for Kindle. (Worst Enemies, a working class derivative of Strangers on a Train.) He liked that, too, and asked to see the draft of the second book in the series, Grind Joint. He dug that enough to get after me to send it to his publisher, Stark House, which I was reluctant to do, given my previous experience with small, but respected, presses. Unknown to me, he also started in on Rick Ollerman, his editor, to read the book.

A moment to describe Charlie Stella: he is a force of nature. I have never known anyone more loyal, or willing to put himself out for something, or someone, he believes in. An e-mail thread evolved where I agreed to send Rick the book and Rick agreed to read it, if Charlie promised to leave us alone about it.

Rick liked it. The publisher, Greg Shepherd, liked it. Grind Joint will be released by Stark House on November 21.

I hear you now. “What does this have to do with the book you released last week for Kindle, A Small Sacrifice?” Thanks for asking. A Small Sacrifice is the book the second agent almost sold. I used the Nick Forte PI character in Grind Joint, in a minor, but pivotal role.  A Small Sacrifice and its three brothers are his backstory, and I can let them out in dribs and drabs as I feel like it. Like I said above, always have something ready, in case there might be a use for it.

Total time from the day I started serious work on the book the small, but highly respected, press rejected until Grind Joint will be available: fifteen years.

That’s how I became a published author. Your mileage with this method may vary.

I love hearing how other writers made it to the publishing table...and how my own road there will most likely be as unique as yours. Great point about how you worked Nick Forte into another book with other characters. I very much like a 'shared universe' type thing. Pelecanos used to do that. Congrats on the new book and the perseverance.

Although the details are specific, I think that this road will have a lot of resonance for other writers. The combination of luck (and bad luck), perseverance and talent are pretty much the way it happens these days and I suspect that fifteen years is not that uncommon either. Congratulations.

Thanks, Scott. I like the shared universe idea, as I have some locations and characters and locales I enjoy, and hope to weave them in and out, as well as maybe spin something off, if i continue along these lines.

Thanks, Seana. I I hoped to share one thing that might be helpful, it would be to keep writing. Everything else comes from that.

I guess many of us could tell similar kinds of twisted and weird stories about how we finally got something out there. It's a crazy crazy business.

Patti - Thanks for hosting Dana.

Dana - Thanks for sharing your story. I'm happy that you've had the good fortune you've had, and your story is really helpful. But don't sell yourself short. It takes talent, too, and you've got it.

Thaks, Margot; you're very kind. I'm still very aware that talent ans six bucks might buy a coffee at Starbucks, and there are far more talented writers than I who can't catch a break. I'm a believer in the old adage "luck is where preparation meets opportunity," and I hope I'm suitably prepared, because we all know opportunity knocks but once.

For the record, I would fight just about anyone short of my wife and mother for Charlie Stella. But I wouldn't have to.

Absolutely, I'd fight just about anyone FOR Charlie Stella. But go up against him? Furgetaboutit.

Well, if I ever did have to go up against Charlie, I wouldn't pack heat. I'd pack Cannolis.

I'm always late to these dances ... today I get to look through blogs again because I’m up early enough to make believe I’m going to start a new diet and hit the gym ... we shall see about that .. it’s still early.

It wasn't hard to see Dana's talent ... I remember being in bed reading and turning to my wife and saying something like: “This guy is great. How the fuck is he not published yet?”

And if my wife was in one of her “make fun of husband’s inability to speak two consecutive sentences without cursing” moods, she probably said, “I don’t know. How that fuck is that?”

My trip to publication took something like 21 years or so. I took a few breaks along the way, but always took another shot. That’s the real message in all this ... Dana is right. There are a lot of very talented writers out there (with and without MFA’s, PhD’s, etc.) ... ultimately talent and persistence should not be denied. Unfortunately, it too often is, but I hope that’s changing. I’m somewhat out of the loop on publishing (very happy to be with Stark House--thank you again, Ed Gorman--Ed is the hero in all this, by the way, the guy who is ALWAYS reaching out for others), but if I’m not mistaken, smaller presses are making a comeback. I think I read that somewhere. In any event, Stark House is keeping the dream alive. And, quite frankly, the respect they afford their authors has been unmatched in my humble experience.

Thanks, Charlie. Let me second what you said about Stark House. Among the reasons I almost quit was what I learned from research I'd done to get an idea of what happens after a contract is signed; it looked like more trouble than writing the book, and all doing things I didn't think I'd enjoy. Greg Shepherd and Rick Ollerman at Stark have been great to work with from Day One, especially when you consider they've had to put up with a true novice when it comes to the publishing side of the business. I can't say enough good things about them.

And I want to thank Ed Gorman, as well, though we've never met, for persuading Stark House to stray from their original policy of doing only reprints.